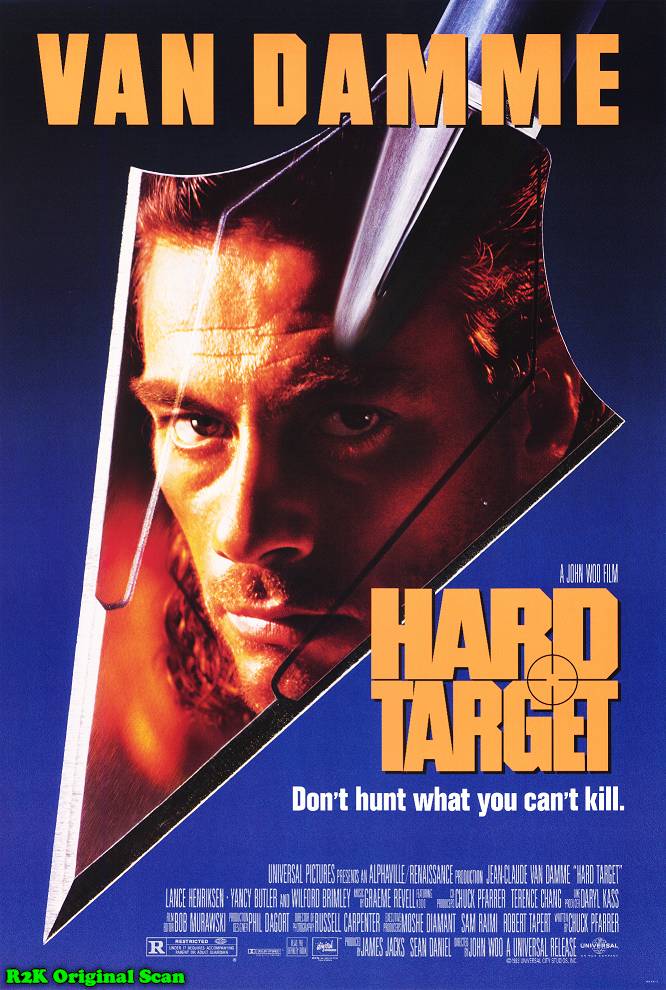 Don’t Hunt What You Can’t Kill. 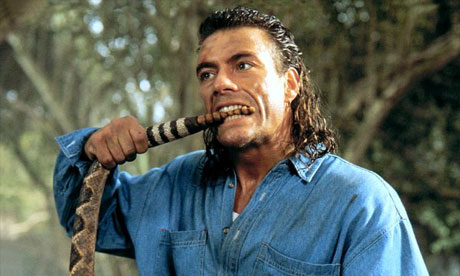 One of the less homoerotic movies of Jean Claude Van Damme’s career, which means it’s still more potent then the average Jeff Stryker film. The title alone tells you which area of JCVD’s anatomy the men will be zeroing in on. Oddly enough, however, he keeps his chiseled pecs and bulging arms under wraps for most of the film’s running time- I can only assume that his hideous Jheri curl mullet was acting as some sort of baby oil sponge, soaking up every glistening drop from his torso and robbing Jean Claude’s physique of that trademark sheen. But good things come to those who wait- in the finale, caked in sweat generated by the blistering heat of a burning Mardi-Gras warehouse, JC finally peels off his shirt and takes on the rugged bad guys in a tight, moist wifebeater!

Early in the movie, a woman named Nat (Yancy Butler) discovers that her late father, homeless and living in New Orleans, had been passing out flyers advertising phone sex (with women?!) to make extra money. JCVD, playing a character named Chance (“My momma took one” he explains…so much for the withdrawal method), hangs his head in complete shame and admits that he too peddled these flyers promoting heterosexual activity. Shortly before that scene Chance confronts some guys and tells one of them to “Take your pig-stick, and your boyfriend, and find a bus to catch.” The guy laughs, but never denies the lusty allegation.

But the most telling moment comes near the end when Chance and Nat are hiking through a dangerous swamp, evil mercenaries in tow. Taking a break, Chance tells Nat to close her eyes. She does so, rearing up for the expected kiss, but instead JCVD brushes her aside and takes grasp of a long, virile snake instead. Now, I suppose you could simply view this as Chance saving Nat’s life, but this film was directed by John Woo, and those Asian filmmakers are fond of their symbolism, aren’t they?

A pretty healthy amount, by JCVD standards. A great many die by gunfire and explosions instead of being spin-kicked into unconsciousness. I’d guess that at least 30 or so people buy it- a high water mark for Van Damme’s career.

It’s hard to say. It’s sappy, overly dramatic, has horrible dialogue, a goofy soundtrack, and just about every John Woo Hong Kong action movie cliché you can think of is here: excessive slow-mo, guys wielding dual pistols, the bad guy and hero on opposite sides of a wall bullshitting while reloading, and birds randomly flying around during gunfights. It’s like Woo took all his past HK movies and combined them into Hard Target (his American directorial debut) which, while entertaining, is essentially crap.

However, it’s well-made crap. It’s fast paced, has (for the most part) good casting, the action scenes are plentiful and expertly choreographed, and it has excellent production values. As an amateur filmmaker myself, I took special note of how good the camerawork and editing is; everything is fluid and cut with an eye for detail. But all that quality is counter-balanced by the almost unlimited, unintentional camp value so I don’t know. All I DO know is that whenever this thing is on TV, I’m glued to that shit.

Also, Van Damme is a really shitty actor. I love how the script tries to provide a logical explanation for his accent.  Why he would pronounce “wallet” as “waah-LEET” or “daddy” as “did-DEEE?” I know! Let’s make him Cajun, despite the fact that no one in modern New Orleans sounds even remotely like Gambit from the X-Men.

Anyway, the storyline involves a dude named Emil Fouchon (played the awesome Lance Henriksen) hiring local bums as moving targets for rich white guys. Nat’s estranged father is killed as a result and she starts investigating his death, drawing Fouchon’s ire. She hires broke gay sailor Chance to help her after he beats the shit out of 4 thugs who tried to mug and rape her in plain view of a street full of people. She initially offers to pay him $100 a day, to which the suspicious Chance asks, “For doing what…?” “For $100 a day,” she replies, “does it matter?” “Yeah, it does,” he retorts, obviously fearful that there may be heterosexual contact included in the deal. But once it’s clear that she just wants a streetwise guide and not to infect him with her rancid vaginal juices, he relaxes and accepts.

Wilford Brimley also appears as Chance’s crazy, backwoods-dwelling Uncle Douvee, and really hams it up. You haven’t lived until you’ve seen Wil yelling “Good moonshine make de jackrabbit slap de bear!” or some wacked-out shit like that. He’s also sporting this beard that makes him look all cuddly and bear-like.

Very, very disappointing in this regard- like I said above, good dialogue isn’t Hard Target’s strong suit. Even these are barely worth mentioning:

Pick Van Cleaf (played by Arnold Vosloo, who’s pretty fun in this) tells a fat guy whose ear he just cut off with a pair of scissors, “The next time I come here…I cut me a steak.”

Chance, right before delivering a final head-butt to Fouchon: “Hunting season…is over!”

Beats me. There’s this side-plot about a police strike, but shockingly, the locals aren’t looting stores for TV’s like when Katrina hit. Actually, quite the opposite- every street was almost completely empty. Weird.

Oh, there’s a bunch.  The fat whimpering crony taking a point-blank shotgun blast to the melon is always good for a laugh, but the one that comes to mind most readily is at the end when Chance drops a hand grenade into Fouchon’s BVD’s. Fouchon pulls out the grenade, but instead of just throwing the fucking thing away, he decides to take, like, 10 seconds to dismantle it instead. Shockingly, he manages to succeed, but the thing still blows his ass up when the fuse in one hand sparks (while he’s laughing in triumph, of course) and ignites the explosive in his other hand.

Another good one is when Nat picks up a gun during the big shootout at the end and plugs a baddie 10 times right in the cock. For some odd reason, Wil Brimley gets pissed at her, even though he just got through putting an arrow through some guy’s neck a second before. Again, it might be symbolism regarding dicks and how women can render them inoperable. Or something  like that.

Wait! Another is when Chance kicks a gas can at a guy on a motorcycle, then shoots the gas can with a shotgun. The resulting explosion sends motorcycle and rider throw a window, landing right in front of Fouchon and his men. That was pretty fucking cool.

No, but for some reason every time a bullet hit something it would explode. Even non-explosive things like parade floats, tables, and lights on top of cop cars. This may sound cool, and in a way it certainly was, but it was also just…I dunno, strange. I mean, there’s one scene where Fouchon fires his one-shot hand cannon, hits a barrel, and the thing takes off straight up like a goddamn rocket (including exhaust shooting out the bottom!) and never comes back. I mean, what the fuck?

Lance Henriksen fucking rules. JCVD was born to rock a mullet. The chick playing Nat has disturbing Groucho Marx eyebrows. And I wish Wil Brimley had played a drunk Cajun in The Thing.