Preliminary Discussion: Are The A-Team Gay?

Episode three: The Children of Jamestown

Hopefully I won’t shatter your faith in artistic integrity by revealing this, but 80’s Action TV sort of, kind of, recycles plots. “Airwolf,” “Knight Rider” and “The A-Team” all have episodes that deal with cults and the cults all wear the same monastic, brown robes, probably from the same props department. Also it seems like there is always at least one van. I miss vans. How are SUV’s better than vans? I don’t think they are at all. Like, according to SUV commercials you can drive them up sand dunes and mountains and shit, though if you actually do use an SUV for that it will break. But even if that crap was real, I’ve never seen an SUV with a boss wizard from a Rush song painted on the side.

You can get with this:


Or you can get with that:

Also, as I’ve grown older, I have come to kind of see the appeal of joining a cult. You grow some vegetables, catch some Z’s and look the other way when the cult leader rapes a twelve year old girl. Hey, that’s an easier life than I lead. But the A-Team is composed of individuals far more scrupulous than myself. The introduction of Dirk Benedict as the new Face Man really does constitute a huge upgrade. The man just oozes a mix of charm and smarm that I like to call schmarm. And he plays a key role in initially duping the cultists and snagging the kidnapped girl the team have been hired to retrieve. This is the first episode in which the plans that come together actually seem thought out instead of created ad hoc to meet the story arc. Like the whole set up with Amy, Face and Hannibal staging a false three way confrontation in the general store to distract the cultist must have taken minutes of forethought. I like this still because of how Hannibal is lurking in the background, masterminding.

Worth noting: Amy is underrated as an 80’s fuckshell. Our own Wax wears the exact same jacket as Face is wearing in this still. I’m not 100% sure but I think this cult leader is based on Jim Jones, and they just changed ‘Jones’ to ‘James.’ I know it seems crazy at first, but mull it over. Masticate.

So after they rescue the girl, the A-Team, minus Murdock are captured by the cultist. The cultists have no idea who they are fucking with and the A-Team smash their shit as though the were Delonte West and the cult was LeBron’s mother. Also, after they are captured the A-Team explain the basis for their courage to Amy in what I found to be a very profound scene. Their basic message was best articulated by Face: “Accept death. It calms you.” It’s like a cross between Mel Gibson’s speech in Braveheart and Gore Vidal’s Messiah.

Best B.A. Line as nearly as I can decipher it: Hannibal why you go busting Face man in the lip for? You know you can’t go ???? making a mess of my meal ticket. Won’t be able to get no good hotel rooms!

By the way, I went with good old Olde English for this installment. Solid alcohol content, rancorous taste. This is the one malt liquor I believe to be deliberately designed to taste horrible. I’ll still take it over King Cobra’s weak ass, but getting it down is not fun. Also, if anyone can come up with a recipe for worse farts than OE and hard boiled eggs, I’d like to hear it. After Mengeling my second floor apartment, I walked about four blocks to the store and when I came back I could still pick up the smell about half way up the steps to the place.

Episode 4: Pros and Cons (that is a very clever title)

So this episode is about is about how one of the many kids who looks up to B.A. has an older brother who is imprisoned on false pretenses in the South, where he is forced into gladiatorial fights. One thing I’ve come to realize about 80’s Action TV is that, although it is right wing in it’s overall tone, it caters to prejudice more than anything. Like, in this case, the South of United States is depicted as a backwards world beyond the rule of law, where hillabillies who have stumbled into money, perhaps earning their fortunes by combing the highways for picture books and bars of soap that have fallen of trucks traveling between the coasts, bet on human cockfights. The A-Team infiltrate the hick prison system by 1) Having Hannibal and B.A. deliberately arrested and 2) having Face come into the prison as a bogus, federal investigator named Doctor Pepper. Of course, B.A. is chosen as a gladiator and the A-Team turn the hillabilly fiefdom upside down and sodomize it. The best part is when Hannibal and B.A. first enter the prison and some fool steps to Hannibal and declares him a fish. Hannibal disagrees. The dude asks if he is a tough guy and Hannibal points to B.A. “No, he’s the tough guy.” 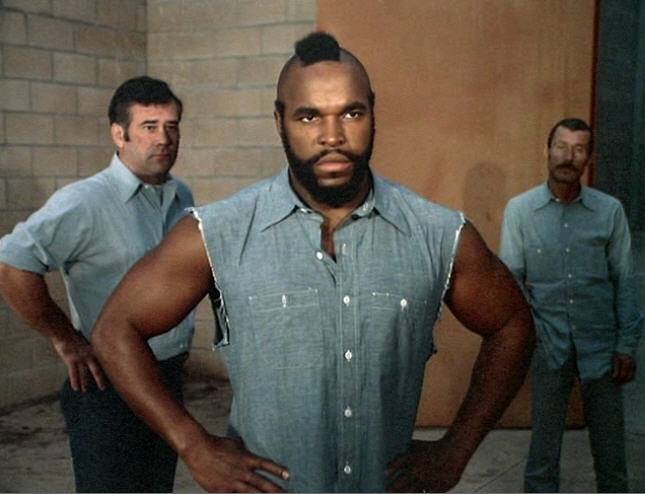 How fantastic would be to have Mr. T covering your back in real life? Because I work in the filth of the California gambling industry, I used to be a friendly acquaintance of this gang of Laotian bloods, headed by a guy who was basically the Asian version of Mr. T. I’m not saying we hung out or anything , but we were on good terms and I always wished someone would cross me so that I could kick Bune a few hundred bucks to correct them. Unfortunately, I’m an easy going and likable person, so it never came to that.

Best B.A. Line: Like them gladiators in Rome, man.

Episode 5: A Small And Deadly War

This one is about about a cop who hires the A-Team to catch a corrupt unit in the LAPD. You heard me right. Crooked cops in the Los Angeles Police Department. Ah, the magical realm of the human imagination: where anything is possible, except for dying in a dream but not in real life. Basically, the captain of the SWAT team has recruited a bunch of guys he has dirt on and blackmailed them into becoming a hit squad. Some random Sarge catches on and hires the A-Team to flush out the only crooked cops in LA. Murdock is conned out of the psych ward for the 38th time in five episodes and the A-Team set about proving themselves against the elite of the LAPD. The best line by a cop who doesn’t really dig the whole operation: “Eight grand to blow away your brother so you can take over his stinking laundry.” Even in ’85, or whenever those seem like pretty low rates for a SWAT team to bump someone off. But in the 80s and through the 90s TV shows would consistently condescend to viewers by regarding any sum of money from the perspective of a homeless person. I remember both “Rosanne” and “Married With Children” having episodes where everyone acted like landing 20 grand would make them “rich.” I mean, my dad made 20 G taking a dump, but that wasn’t what was so annoying about it. It was annoying because even viewers who made $20,000 per year knew all too well that falling into that sum would not make them rich. And indeed, even figuring for inflation, $8,000 dollars seems like a paltry sum to hire a four man SWAT team for a killing. I don’t really know about such things, but I suspect you’d be hard pressed to find a hard core gangster to risk the gas chamber for so little. This episode also contains an explicit reference to The Seven Samurai. Pretty cool, especially since 80% of A-Team episodes rip it off.

Anyway, Face infiltrates the LAPD as a roach killer by planting literal bugs and this allows him to plant figurative bugs, created by B.A. Look out, Bela Tarr! The A-Team catch on to their game and send them up the river, just as the deserve! This also, as nearly as I can remember, marks the first use of , “on the jazz,” the catch phrase that just wouldn’t catch, no matter how many episodes they wedged it into.