Here are the original Top 10 Most Ridiculous Black Metal Pics of all time. 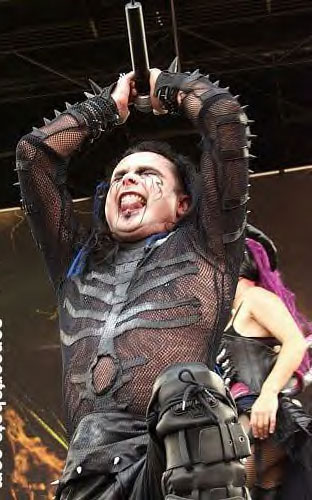 Weighing in at #10 is our good friend, Dani. Yeah, yeah, we all know Cradle of Filth isn?t black metal — they’re more a retarded version of Marilyn Manson aimed at really sexually frustrated teenage losers — but I say tough titties!! I?ll be damned if that isn?t the most angst-ridden, irritable bowel grimace I?ve ever seen. Is that a cold sore on his lip? Oral herpes? Fuck, what is that!? The microphone, as displayed, is clearly a homage to the mighty phallus. You would think he?s preparing for a blood-curdling banshee wail, when in fact he?s going to plunge the faux-cock directly into the hole of his fishnet Spider-Man shirt in a gesture of unprecedented homoeroticism. Carry on, Dani. 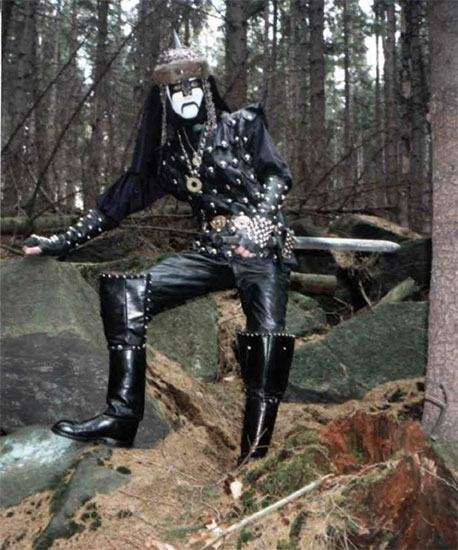 Look everyone; it?s Rob Darken, the black metal Mongolian warlord with fuck-me pirate boots! Jesus… Genghis Horgh, man. Nobody LARPs quite like Rob, and I mean nobody. He?s probably got enough LARP gear in his closet to reenact the battle of Helms Deep for fuck?s sake. He?s also black metal?s biggest racist idiot — which is a hell of an accomplishment. I should do a Top Ten Most Ridiculous Rob Darken pics. Could he have possibly found a more half-assed hodgepodge of garments to wear? It must?ve taken him hours to put all that shit on. I hate to say it Rob, but shoulder pads + fingerless gloves = GAY. Also, where’s the fucking parrot? Half-assed black metal pirate dork…. 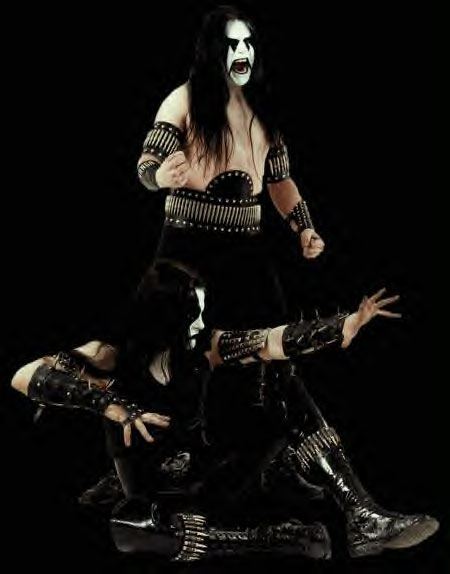 Man, Horgh is just flat out tubby; there?s no two ways about it. That gut-guard is about to burst, and when it does, watch out for a lethal barrage of flying metal studs. You can?t see it in the picture, but his right armband has HORGH written on it, which fucking rules! And what on earth is Abbath doing? What kind of pose is that? It looks like he?s about to be hit by a bus and Horgh, unable to rescue him, is on the sidewalk screaming, ?Nooooooooo?.? Maybe he thinks he’s in some black metal version of The Matrix — Bullet Time Abbath. One of our Ruthless brethren put it best when he said, ?If a man has grown tired of Horgh?s nipples, he has grown tired of life.? The best part is that Immortal isn’t even a band anymore. These two just get together for photo shoots. Jesus… Horgh should just go pro wrestler and get it over with. 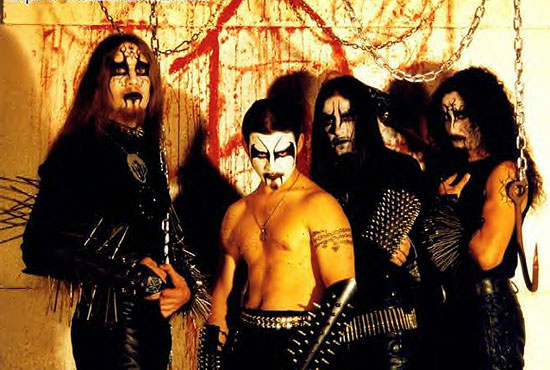 Wow! Look at these fucking guys! This might not be the most ridiculous, but it sure is the most misleading. And by “misleading,” I mean super-duper uber gay! I just have so many questions. When did Glenn Danzig lose twenty-pounds and join an Italian black metal band? Does the guy on the left have spikes coming out of his fucking back? And if he does, like, what? And what?s with the fucking meat hook? Is that Cher on the right? Because there is no way in hell that?s a man, not with that hair. I think they?ve all got something planned for the little guy, and it involves those chains, a studded belt, a bottle of lube, and that rusty meat hook. Or worse. 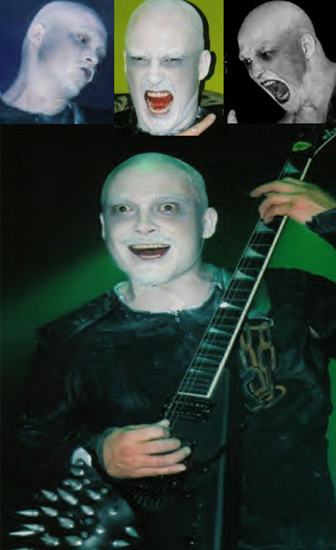 I?ve never seen anyone in the black metal world make as many fucking annoying faces as Galder. Whether it?s on or off the stage, he is perpetually making a fool of himself by grinning, snarling, pursing his lips, sticking his tongue out, or widening his eyes. It?s as if he?s in a constant state of surprise. Perhaps it?s because he can?t believe that he still plays in the awful, awful, Demon Burger. And what the hell is his shirt made out of, melted crayons? 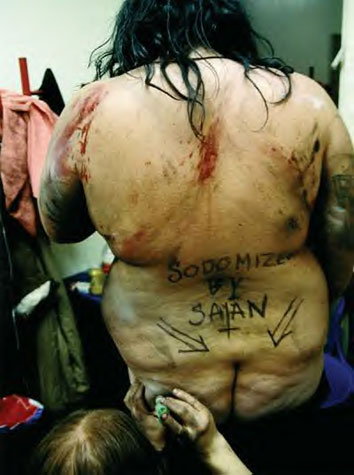 Holy shit, holy shit, holy shit! Vrangsinn got back! If you?ve seen these guys live, you?d know they are totally tongue-in-cheek, (Vrangsinn saunters around the stage in a pair of black speedos) but I never expected to actually see the cheeks! My freaking eyes! That is the flabbiest, cottage-cheesiest abomination of the flesh I have ever witnessed. It looks like a giant slab of weathered and pitted marble. Only Satan himself knows what foul contents have been purged from those unholy haunches, especially after night of drinking cheap beer. Rad! And what the hell could Natte possibly be doing? Taking core samples? 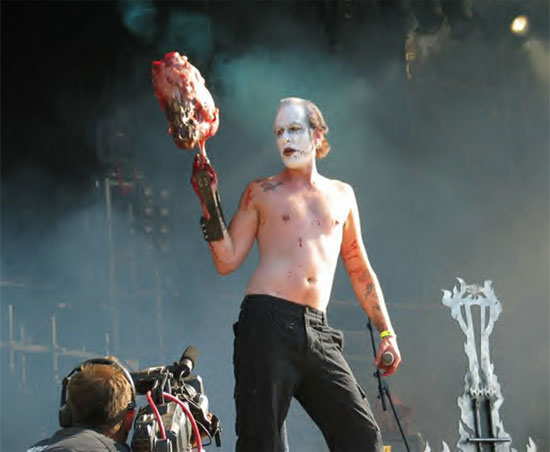 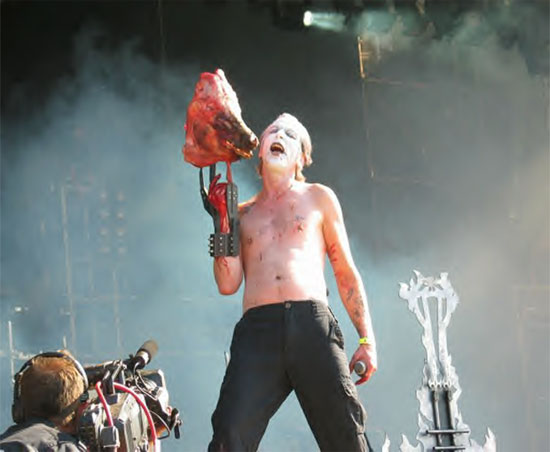 Maniac slides into #4 for two obvious reasons: (1) His new pseudo-mullet hairdo is anything but metal; he looks older than my fucking dad. (2) That Shredder-style, spiked armguard with a pig?s head impaled on it might be the lamest black metal prop ever. Did he do the entire show with that on his hand? Looks pretty cumbersome to me. Anyway, how about the necrobestialerotic faces he?s making? I like the way he kicks out his hip in the first pic, showing off for the cameraman who is surely beating his cock raw to all of this. I mean, is that supposed to be sexy? Or tough? Or unholy and grim and inverted? Also, nice pants asshole. Old Navy was having a sale? Next… 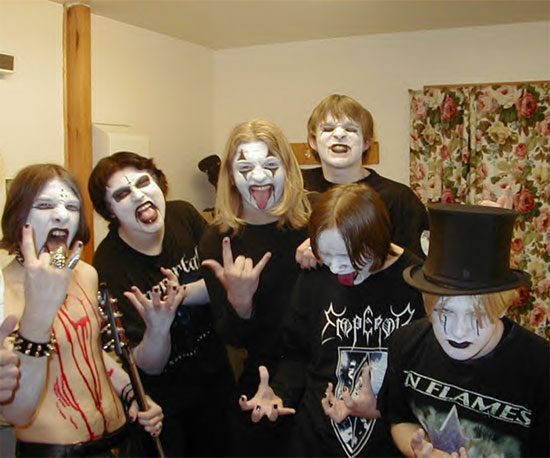 These guys can?t be older than 15. Only one of them has sufficiently long hair and unfortunately for him, he looks like a fucking rodeo clown. Listen kids, to do this right you?ve got to cut back on the white and add more black; black lips only make you look like a faggoth. You need some around your eyes to look evil. No fucking top hats and no In Flames shirts, unless you?re aiming for the Demon Burger look. Which is bad. Additionally, no god damn black fingernails either! The teenaged Mexican Slayer kids in Los Angeles would fuck these guys up and then some — weak! And who?s that little shit in the back and what the fuck is he doing? Somewhere in Finland, there is a father that needs to take the flat side of a broadsword to his child?s behind. The future of black metal is doomed. Wait, there is no future of black metal… 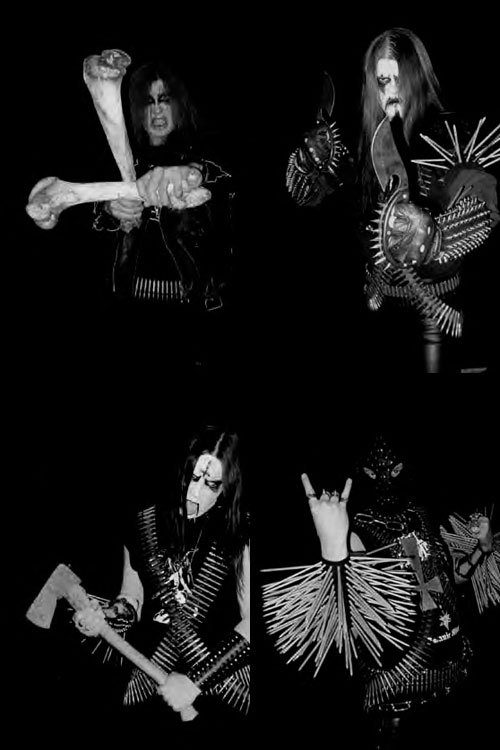 Wait a minute, since when was it cool to have a fucking gimp in your band!? A BLACK METAL GIMP!! Not only that, but a gimp with homemade armbands that would make Frost jealous. He?s even got a chain around his neck! The whole fetish/bondage theme is taken to unparalleled heights here. Do these guys work at a hardware store? Also, check out that inverted bovine femur cross!!! God damn!! Trondr?s dull hatchet looks about as threatening as Abbath with his pants unzipped. These guys are too much. Tell me, what good are the bullet-belts without fucking guns!? The only reason why these guys didn?t make #1 is because… 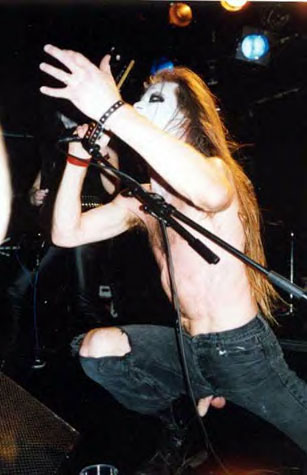 Rock out with your cock out!! Really, why say anything else? This photo encapsulates the best of what black metal has given us over the years. The poor guy?s cock n? balls ripped through his pants, yet in the true spirit of evil, he just kept on rockin?. And why shouldn?t he? Forget the spikes and chains because your cock is as metal as it gets.