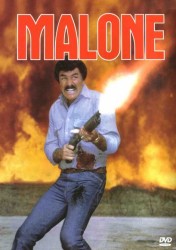 A Burt Reynolds film is always tough from a homoerotic standpoint, largely because Burt tries so hard to portray himself as a ladies’ man. He was this country’s number one sex symbol for quite some time, but one look at him and it isn’t hard to imagine that just as many men masturbated to his image as women. He is burly, masculine, well-built, and, well, that moustache! As for the film itself, Burt does make his initial appearance with his shirt wide open and chest hairs flowing. He also bonds with another man over a mutual love of cars, which later provokes a woman into saying, “You like that car better than me.” Burt is kicking back in a barbershop when a local drunk comes in with a gun and accuses Burt of having a “teeny pecker.” Needless to say, that man is gunned down within two minutes of that remark. Burt also flirts with several women, but does not have sex with any of them. The only other instance of homoeroticism occurs when another man lights Burt’s cigarette. I know, it’s not much, but Burt is very careful with his image.

Only 12 people meet their end, most of whom are murdered in the final act. When the deaths come they are sufficiently brutal, but until the bloody finale, we are forced to endure dull scenes of Burt trying to act macho. In order to make this dud worthwhile, at least 100+ would have to die.

It’s not as horrible as other action romps of the 1980s, but it is rather boring and uneventful. I expected more gunplay and cheesy one-liners, but Burt insisted on playing the “strong, silent type.” Still, Burt’s toupee looks positively terrible; I don’t remember it ever looking this bad. And what can we say about Burt bursting through a window — without suffering so much as a small cut — and still having the presence of mind to blow away a man from a distance of at least 200 yards? But the most Herculean effort of masculinity occurs when Burt is blasted through the stomach by a high-powered weapon. From all appearances, his entire gut has been blown away. Not only does Burt survive this event, but also manages to live after being in a rollover accident while on the way to the hospital. Through it all, Burt sweats a bit and I believe I noticed some slight wincing. Within a few days, he is back to his old self — running, jumping, and blowing assorted scum to pieces. All of this is made even worse by the fact that we must once again hear the old chestnut, “I’m getting too old for this.”

After one of Cliff Robertson’s henchmen confronts Burt in a barn, Burt bellows “Wrong!” after being told he wouldn’t dare shoot the guy. Other than that, there’s not a lot of humor, intentional or otherwise.

This might pass as an indictment of right-wing survivalist groups (Cliff Robertson plays a wealthy right-winger who wants to “take America back”), but we get so little political insight and dialogue that the label becomes a mere plot device. Robertson could just as easily be a drug smuggler or a wife beater, as this is far from an exploration of the mind of a conservative racist. Cliff does utter, “We of pure race must get rid of the traitors in this country,” but Burt kills him and his gang not because they are megalomaniacal bigots, but rather because they targeted him for death when all he wanted to do was get his car fixed in a small Oregon town. His killings are motivated by self-preservation, not politics. There is also the fact that Burt is an ex-CIA man who committed atrocities for his government, but when he wants out, the Feds send someone to kill him. I guess this is the film’s way of saying that if someone wants to go straight, the big, bad government wants you dead. Politics aside, this film is nothing more than a typical 80s Actioner that believes it is righteous and justified to kill when pushed too far.

Within two minutes of Burt’s arrival into town, an old man on a bicycle is hit by a car. That in itself would not be a novelty unless the sequence featured one of the worst dummies I have ever seen in a movie. It looked no different than if a car had run into a love doll. Later on, a man is killed by a bale of hay.

Given Burt’s total lack of charm and charisma, I am still in the dark as to why this man was a box office champion for so long. More importantly, as any doctor would tell you, the quickest way to recover from a massive bullet wound to a vital area is a few hours of bed rest.