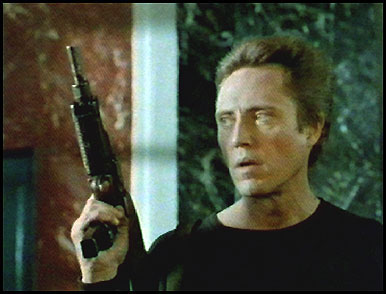 Jonny has been laughing for the last 4 hours…

Tagline? The movie is fricking called, “McBain!” Who needs a tagline?

I’ve seen gayer. The big black guy (Steve James) and the short white guy (Russell Dennis Baker) are clearly in love with each other. Other than that little sub-plot, this movie is much too cheesy to appeal to homosexuals. McBain and his buddies walk around in Hawaiian shirts, fedoras and aviator glasses. Seeing as how gay is the new bling-bling, queer guys are supposed to have taste and class. Quite the opposite of this nightmarish movie.

240 people are shot to death, stabbed or burned alive in this movie. I could hardly keep the pen moving fast enough. 240! Thirty people are gunned down and knifed within the first five minutes of the film.

Marking what has to be the low point in the careers of, not just Christopher Walken’s, but everyone involved with it, McBain is simply horrible. Its only saving grace is that it is so damn funny. Completely unintentionally of course, though Walken knew this and had a good time with the roll, but I have rarely laughed this hard at an 80s Action film. Let me give you just a few of the countless examples.

So, McBain and these guys he met in Vietnam (different units, but they still all follow McBain around like puppies) are invading Columbia and a little girl has her, “ribs crushed into her lungs.” She’s in shock. The Dr. of McBain’s team doesn’t want to operate because they are in the middle of a field. McBain tells the doc that if he doesn’t operate, the girl will die anyway. He then hands the doc a pocketknife. The little girl gets cut open, ten seconds go by, AND SHE REGAINS CONSCIOUSNESS!!!! AND SMILES!!! 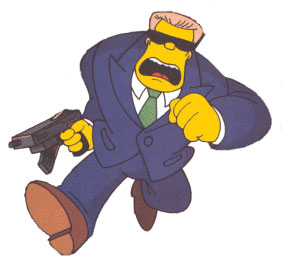 At one point, after McBain lands in Columbia, for the first time in his life, he is told, “The Rebel army awaits your command, sir.” In English no less. Oh yeah, all the Columbians speak English. Every one. From El Presidente who delivers state of the union addresses in the Queen’s tongue, to crooked soldiers to peasants in the cocoa-fields, everyone in McBain’s Columbia communicates in English. California should be so lucky. Hell, Ireland should be so lucky.

The whole “plot” starts out cause this one guy in Columbia tells his sister (Maria Alonso), just before he goes on a raid to attack El Presidente’s palace, “If you ever really need help, I want you to look up an iron worker in New York named Bobby McBain.” At one point McBain and his team are trying to get money together to finance their little revenge operation. So they raid a crack house, killing about fifteen people, before ultimately NOT taking the money because the head drug dealer (Luis Guzmán, who they don’t shoot for some reason) convinces them that drug dealing is the only way out for minorities and they should go after John Gotti. Which they do. By pretending to be Israeli Mossad agents, they scam $10 million dollars out of the toughest crime boss in New York. Four guys. McBain!!

The crapiness goes on and on. From a flashback sequence fifteen minutes into the movie (I guess writer/director James Glickenhaus was worried people had already dozed off) to one rebel explaining that El Presidente had the entire country of Columbia hooked on Cocaine to McBain drawing a parallel between the entire population of Columbia being hooked on coke and his three days high at Woodstock to a Vietcong guy wearing a necklace of human ears to toy planes exploding on screen to McBain being rescued from a POW camp modeled after the Terrordome to McBain and four other guys taking over a whole country wearing Dockers, every single aspect of this movie was rotten and terrible. One character claims to have drank 35 beers. An airplane has a selector switch for napalm or rockets–in 1991! I mean, right after the President of the U.S. announces that from now on all U.S. currency will be printed on red, white and blue paper, the one head bad guy turns to the other and says, “I’m glad I converted my assets into Swiss francs last week.” Also, the head bad guy, who is really running Columbia, is named “Hans. ”

None. People just get murdered by the bushel with little fanfare. Though, McBain does make a palace guard hold a flowerpot. I have no idea… 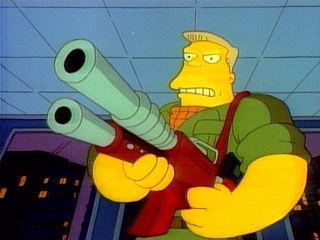 Vast, but confused. McBain runs the gamut of right-wing cause-celebs. In the opening scene of the movie it is announced that the U.S. just won the Vietnam War. Walken at one point quips, “If you took the weight of all the people in Washington D.C and turned it into gold, it would be less than the annual worldwide drug trade.” Pretty savvy for an ironworker. While fishing in front of the Statue of Liberty, a Columbian tells McBain how great America is. Of course he counters with something about how New York (urban areas-filled with blacks and browns and Jews who want to take away your guns) is really messed up. This is after him and his friends murdered fifteen people in cold blood. Again, for no reason. There is a peasant uprising in Columbia with all the trappings of communism, but they all follow an unknown white man and his gang of middle-aged dorks who have no agenda other than killing drug dealers. And McBain recanting his days at Woodstock… Like I said, a mess of a message.

This is where McBain excels over all over movies ever made, even Commando. Like I mentioned, lots of people get burned alive and shot with bazookas. Maybe I didn’t mention the bazookas, but I would say they take care of about forty people. One teenage rebel goes to drop a grenade into the barrel of a tank and gets his hand stuck. Ka-boom! Another time, El Presidente has a guy strung up by a ceiling fan and “Hans” rips said fan out of the ceiling and throws it off of a balcony, which of course sends the guy falling to his death. If you go to Home Depot you will find their ceiling fan section. You can pick them up. Hell, you could probably pick up three at a time. Like I said, McBain excels.

Please sit down for this next one.

McBain and friends are up in a little prop airplane getting ready to invade Columbia. A Columbian military F5 pulls up along side them and orders them to land. They’re probably up at around 10,00 feet. McBain pulls out his 9mm handgun, shoots across his pilot’s face, through their plane’s window–which does not break–through the canopy of the F5 and right into the Columbian pilot’s head. You honestly have to see it to believe it. Worth the price of the rental alone.

Was There A “Stupid Chief?”

Was Michael Ironside In The Film?

As long as you pick on drug dealers, the mafia or South American drug runners, you can kill whoever the fuck you want with impunity. You can also take a rubber raft from Long Island to Jamaica in a few hours. Private citizens are allowed to have their own air force. Actors are held to no standard, have no accountability, etc. This 80s Action Guide is rotting my brain, for surely this is one of the worst movies ever made, action or otherwise.