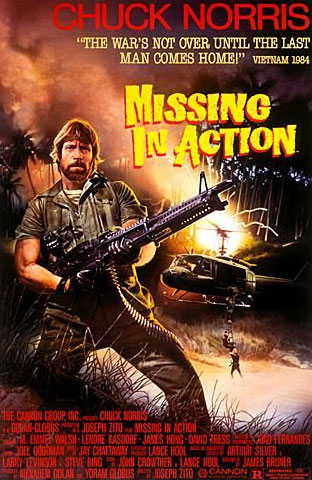 Matt is getting upset…

“The war’s not over until the last man comes home!”

Surprisingly enough, there’s not a whole lot of overt homoeroticism, but enough is implied. First of all, Norris wears tight jeans in several scenes, and we get plenty of close-ups of his hairy, glistening chest. And, in a flashback scene, we get to see a sadistic Vietcong commander tear open Chuck’s shirt while he’s tied up by his hands. There’s also a woman who works for the State Department, who we believe is going to be a love interest, but instead stands around while Norris strips down to his underwear. This occurs two separate times, yet they do not have sex. Hell, they don’t even kiss. Even more confusing is when Norris visits Bangkok and turns down an offer of a $10 hooker, and then visits a whorehouse where again, he does not have sex. One could argue that he doesn’t even notice that there are women in the building. Add to that the obligatory wrestling scenes, complete with grunting, sweating, with the occasional mud thrown in.

In all, there were 95 confirmed on-screen deaths (yes, I counted), including 32 in the first nine minutes. When Norris blows up a POW camp, at least 100 more were killed, but I was not able to make an accurate count. So, that’s like 200 corpses.

At least Rambo moved! I was bored out of my fucking mind when I wasn’t being disgusted by the phony dramatics. Norris is a bland non-actor who just might have the fewest lines of dialogue by any lead actor since the advent of sound. And, given that his expression never changes, it’s impossible to tell whether or not he’s even human. I guess you could give the film credit for filming in what appear to be authentic locations (as opposed to the Georgia wilderness of The Green Berets), but that’s faint praise indeed. If I’m going to spend 100 minutes in the presence of conservative propaganda, at least try to be entertaining. It was not. Hell, I didn’t even laugh at the absurdity of it all.

Since Norris rarely talks, I thought I’d never hear one. Near the end, he does utter “Yeah, fortunes of war” after killing a slimy soldier, but I would never defend that as a good one-liner. Chuck’s buddy in his quest does scream “I’ll see you in hell” as he jumps overboard to help fight off a Vietnamese boat, but he wasn’t about to kill anyone at the time. Usually films of this type have silly one-liners galore, but I’m not sure the filmmakers even bothered to pick up a script. Dialogue of any kind was the last thing on their minds.

Quite obviously, this film is nothing more than Reagan-era revisionism attempting to redefine the lost cause of Vietnam as a rescue mission instead of the misguided, unwinnable slaughter of millions. Still, I must ask: if POWs were being held for ransom or as a bargaining tool, why would the Vietnamese government deny that they had them? Is it because they love torture and brutality for their own sake? And when we reach one of the POW camps, why are there guard towers? If the Vietnamese deny their existence and the United States government refuses to believe in their existence, who the fuck is going to come looking for them? If no one cares, why not let these wounded, psychologically damaged men wander the streets? Why devote millions of dollars, hundreds of troops, and all the latest military hardware to keeping them hidden? And then when Norris finally locates the POWs, there are only three of them! All that effort for three fucking men? This great, elaborate conspiracy to hide three cocksucking men? Does this shit make sense to the moronic right-wingers who believe this nonsense? Is this how America deals with loss and humiliation? By completely losing our minds and believing what is patently false? While Norris never whines like Stallone about the injustice of it all, it is clear that only bearded, ever-so-homoerotic men are capable of winning our battles. And while we’re at it, given the high percentage of minorities who fought in ‘Nam, why are POWs in these films always white? Is it because if not, then no one, not even well-built dipshits, would risk life and limb to find them?

Norris slams an axe blade into a man’s chest with his bare hands. It takes a few minutes, but he finally gets it in. And, in a flashback/dream sequence, Norris takes a grenade in each hand and jumps — slo-mo style — from a ledge where he lands on several Vietcong and explodes. When the scene immediately following this one is of Norris waking up in a cold sweat, I could not have been more disappointed.

When it comes to revisionist fantasies, right-wingers have us all beat in terms of downright silliness. Do they really believe that you can erase the past and create an entirely new present, even if it resembles a comic book? Of course they do.