MISSING IN ACTION 2: THE BEGINNING 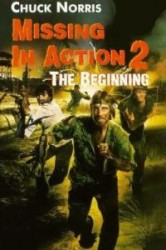 How much man-on-man lust this film contains depends on how homoerotic you believe it is to sacrifice one’s body for other men. Because I happen to believe that the entire raison d’etre of the military (“do it for your buddy”) is as gay as a Barry Manilow concert, this film is practically a recruitment poster for the bathhouse. Norris endures trials, tribulations, and excruciating pain for his male comrades, which is about the only way Herr Reagan would allow us to express our buried longings back in the day. Here, Norris is all beard; a sweaty, gritty man’s man who knows how to kill, but most of all, knows where the good men are hiding. Fine, Norris doesn’t bare his chest as much as he could have, and firm abs were kept under wraps, but the whole idea that men are at their best when thinking about other men is what this category is all about. But the final fight between Norris and Colonel Yin? Like nude mud wrestling mixed in with a few rounds of back rubs, dear readers.

At least 30-35 died by the gun, the blade, or the grenade, but an exact count is impossible given the way Norris often disabled his opponents. A kick to the face might put a man down, but is he really out? As a compromise, let’s say that two-dozen will require significant medical attention.

Norris is in a Vietnamese prison camp, he escapes, he wants to free other POWs, and an evil Colonel wants to kill them all. Typical 80s revisionist fare, with some of the least interesting plot twists ever recorded. There were explosions every five minutes and plenty of flying corpses, but Norris has the charisma of a wax dummy, so it’s hard to care whether or not he saves the day. I did chuckle when Norris pulled a cartoon move and managed to elude his captors by hiding underwater using only a thin reed to breathe with, but that was the extent of my entertainment. And let me get back to Colonel Yin, as played by action favorite Soon-Teck Oh. That SOB sure made a lot of money playing up Asian stereotypes, yet he’s believable every time. He grunts, snorts, and licks his lips, but we always buy into his character. Maybe there’s still a small part of us that wants to believe those devils really didn’t have any souls. Just like Westmoreland told us.

Norris refuses to comply once again, although he did say “This is for me” after he blew up the hut with Yin’s dying heap still inside. Another POW screams, “I wanna help you get those bastards,” but that’s less a good one-liner than the entire philosophy behind Golan-Globus Productions.

And speaking of Golan-Globus, they were once again the driving force behind a right-wing fantasy that demonizes anyone not killing brown people for apple pie and mom. And when Norris says to Yin, “For the atrocities inflicted on the Vietnamese and American POWs of this camp, I hereby sentence you to death,” I couldn’t help but wonder what sort of punishment our leaders would have received given the blood of 3 million dead that was on their hands. That, and the odd fact that Norris said “hereby” without stuttering. And another question arises: if the Vietnamese were this bumbling and easy to kill, how on earth did they outwit and outlast both France and the United States?

Give the film this — it knows how to kill a guy. When Norris uses a flamethrower to set two dudes on fire, I was thrilled. Those deaths were matched by the number of people who fell from great heights to their ends, including one guy who suddenly turned into a crash test dummy on the way down. When he splattered against the rocks, my smile could have launched several millions ships.

The bad guy is always the one who twists off a chicken’s head and throws it to a sobbing POW.