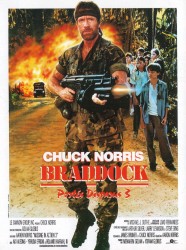 In Vietnam, Braddock left behind more than his sanity.

When we first see Norris, he’s reduced to a moustache, but quickly grows back the beard that made him a cuddly, bear-like hunk. There’s also a scene where Chuck’s guide into Vietnam screams, “See you in hell, you crazy bastard,” after which he blows him a kiss. The peak of gay lust, however, occurs when Norris is brought into a detention center completely shirtless. His captors string him up by his hands and proceed to torture him, although the electrodes are attached to a collar rather than his glistening nipples. But speaking of sweat, the five minutes of this scene contained more moisture than all of Chuck’s other features combined. The juices were so thick, in fact, that a puddle started forming at Chuck’s feet. Unfortunately, much of the homoeroticism was undermined by the fact that Chuck was rescuing his wife and son this time around, although his wife is shot through the head, which is the 80s Action gods way of saying that to love women is to know suffering.

Because Norris was returning to Vietnam to save loved ones, the air got a bit thick with sentiment at times. Knowing that Braddock could love also forced me to re-evaluate the previous two films, as I assumed he was just another mindless killing machine who did what he was told so long as the Commander-in-Chief was a Republican. Hell, Norris even said to his wife, upon seeing her for the first time in 13 years, “You’re still beautiful to me.” No! He’s supposed to follow up such syrupy shit with, “and DEAD!” To make matters worse, Norris also saves an entire orphanage of children belonging to G.I.’s who fucked Saigon whores and cut out early.

No post-anything, but Braddock does have a great exchange with a CIA man as he’s about to leave for Vietnam:

The Vietnamese dude obsessed with killing Braddock also has a great line, which follows the usual “Braddock! Braddock!” screams that define the action/revenge genre. Near tears, he cries, “Braddock! I’ll kill you! I will burn those filthy children!”

Needless to say, this is the land of Golan-Globus; where America is allowed to fight again and again until it achieves the desired result. Just as the Rambo films turned Vietnam from a pointless bloodbath into a noble crusade for POWs, this third entry in the Norris MIA library transformed an immoral slaughter of poor peasants into a rescue mission for..THE CHILDREN! Wipe those noses and dry those eyes, little ones, Americans are on the march! And the opening and closing song is so jingoistic and silly that even Lee Greenwood would blush. The line, “I can see the love of freedom shining in your eyes,” just happens to coincide with the image of a rescued Vietnamese girl (previously raped by the only known Asian man to look like Jack Palance) looking back on her country, rolling her eyes with shame, and heading with pride towards the Thailand border. A closing postscript also tells us that 15,000 “Amerasian” orphans still remain in the hell of Ho Chi Minh City or, as Braddock still likes to call it, Saigon.

I have to give it to Braddock’s wife’s death, who is only shot in the head, but also inspires a slo-mo sequence with Norris and his son that takes the “Nooooooooooo!” leap to new depths of silliness. Still, I’m taking nothing away from the Asian Palance, who is blasted from a hut by Norris’ big gun, where he lands in the dirt and after a few seconds, explodes into a tornado of flame, flesh, and a righteous stench.

Oiled hunks will do what the CIA won’t.