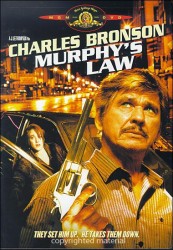 “They stole everything he had. Now it’s time to pay.”

For an 80s Action film, overt homoeroticism is kept to a minimum, although Bronson once again avoids women as if they make him physically ill. He is also obsessed with his ex-wife (who is now a stripper), but that’s only so he’ll be an obvious suspect when she ends up dead. There is some playful, sexually charged banter between cops, including a great scene where Chuck accuses his superior of hanging out with the boys too much. Bronson also makes sure to interrupt a blow-job in progress, but not until the man’s cock is partially visible (to him at least). And when Chuck says to a fellow officer, “I don’t wanna hear about your sex life,” it’s telling that the sex under discussion involves a woman. Bronson also visits a strip club, although it’s only to spy, not stuff dollar bills in g-strings. It’s not much to go on, although I was happy to see one of the 80s Action rules repeated here: within hours after a woman shows her tits or gets fucked, she dies violently. That’s what they get for trying to upstage the mighty cock!

A solid 15 die during the course of the film, and for once, we get a nice variety. A few are shot with bullets, of course, but we also get stabbings, strangulations, drownings, arrows to the neck, and impalings on pieces of glass.

The worst scene of all occurs when Bronson manages to perform a complex karate move while using both hands to keep his guts in place after being slammed with an axe. But this is a film, after all, where Chuck tries to stop a speeding car with a bag of groceries, and his ex-wife is a hot stripper who could easily be his granddaughter. The Defiant Ones premise is also tired, as it forces us to listen to some of the most painful dialogue ever committed to film. Interestingly enough, the worst lines all come from the chick who is handcuffed to Bronson for most of the film:

“You snot-licking donkey fart.”
“Whadya do, rape a nun?”
“Kiss my panty hose, sperm bank.”
“Why don’t you watch your asshole, asshole.”
“Suck a doorknob, you homo.”
“Hey, pubic hair, I’m talking to you.”

Add to that the sloppy editing, ham-fisted acting, and one of the most ridiculous closing credit songs I’ve ever heard (I think it was called “Murphy’s Theme”). And didn’t the director know better than to have both the getaway truck and the helicopter contain a convenient set of keys?

A pretty good one, as it fits Bronson’s quiet machismo and the misogyny of the period. As the killer slips and falls to her death, she screams, “Go to hell!” Softly, yet with great defiance, Bronson quips, “Ladies first.”

Okay, people, last time. This is a Golan-Globus film, with J. Lee Thompson at the helm. What else do you need? First and foremost, there’s the attitude concerning women. If they aren’t bloody corpses, they must be strippers, whores, or maids. And any dialogue spoken by a woman is one of the following: a complaint, a snappy insult that gets her slapped, a come-on, or a cry for help. The rule holds once again, thank Christ. And considering that the killer is a butch-dyke who lifts weights and seems aroused when blood sprays on her face, well, that only adds to the fun. And of course, no Golan-Globus adventure is complete without a cheap shot at the criminal justice system. As the killer strangles her parole officer, she says, “You really shouldn’t have let me go.” Message: grant parole to a criminal and that person will kill again. The film practically begs for mandatory life sentences, regardless of the crime.

A judge is drowned in the bathtub, which in itself is only partially novel, but it achieves greatness when the killer throws in a lamp for good measure, even though he’s already dead.

As usual with a Bronson film, I learned several things. First, even Bronson has an Achille’s Heel, as a criminal escapes after kicking him in the balls. Second, two bullets fired into the trunk of a car will cause it to explode. And third, every single Bronson film ends immediately following a brutal murder. Come to think of it, that’s how they all begin, too.