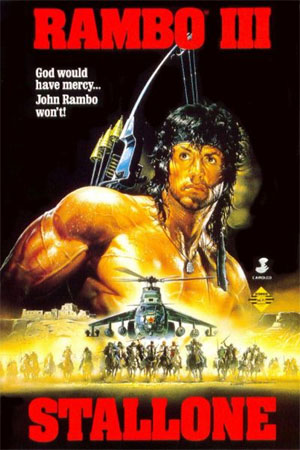 “God would have mercy…..Rambo won’t!” (Or perhaps, “The heroic Taliban will not surrender to the Soviet menace!”)

For fuck’s sake, this is a Rambo film — the entire concept is homoerotic. Stallone is oiled, chiseled, and as masculine as any character in film history. He refuses to bow to pain, and he is more than willing to eradicate thousands of Russians in order to save a male friend. What ever happened to the damsel in distress? Rambo also plays an Afghani game that crosses polo with fondling a goat’s carcass. Man and beast rumble in the sand, huffing and rippling all the while. Needless to say, there’s not a flaccid penis in the house. And what about the little Afghani boy who worships our man Rambo? Hell, Rambo even gives the little miscreant his necklace. Everywhere we look, men are suffering for each other — taking bullets, stepping on land mines, cauterizing wounds — and the women are safely at home wondering why their men don’t do this shit for them.

Christ Almighty, at least 20,000 men, women, and children are butchered in the span of a few hours. Of course, all of the righteous deaths are at the hands of Rambo and his brothers from Afghanistan, while the cruel, barbaric murders are perpetrated by the Soviet Satanists. Just as we knew it to be.

Well, I loved the film at the time of its release, but I was also capable of masturbating several [Ed Note: Seven] times a day back then, so things have certainly changed. The film is a huge embarrassment these days given the portrayal of Afghani warriors, but at the time it seemed reasonable to suggest that anyone fighting Russia was practically Christ-like. The film is nothing more than an extended rescue mission, which seemed to be done to death back in the 1980s. But even in a film of this ineptitude, we do not expect Rambo to survive a head-on collision between a tank and a helicopter.

None that I remember [Ed Note: Rambo mostly grunts in this one], although there are great lines a-plenty:
“Who is he, God?” “Nah, even God has mercy.”
“God must love crazy people…..He makes so many of them!”

Well, outside of the fact that the Taliban and the entire nation of Afghanistan are made out to be heroes, I suppose nothing is wrong here. Hell, even Trautman calls them “freedom fighters” (as did Reagan). Trautman also tells a lip-smacking Russian colonel that Afghanistan will be his country’s Vietnam, which indeed it was. Still, it is hilarious to watch this film in post-9/11 America and remember a time when our present “enemies” were once our brothers-in-arms. But then again, that’s so American

Not as many as I would have liked. Many people are killed and stuff is blowed up real good, but most of the deaths are of the conventional action movie variety. The only novelty, again, is that Rambo doesn’t die at the end. But we always knew that rock-solid chests, doused with a little baby oil, were enough to protect us from out of control military aircraft.

There’s no end to what a well-built man would do for another well-built, though middle-aged, man.