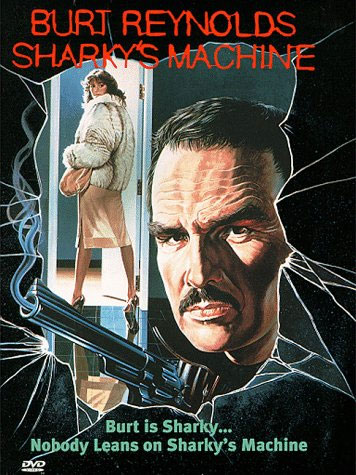 “Nobody leans on Sharky’s Machine.”

1981. Burt Reynolds. Defiantly heterosexual. Whatever you want to say about the man, he never betrayed homoerotic leanings, unless of course one interprets his hyper-masculinity as overcompensation. Reynolds is so macho and so manly that I immediately suspected that his character masturbated to Playgirl or something, but I could never get the required evidence. Still, we do see Burt shirtless in several scenes, although he’s spying on a chick at the time. And a naked one at that. Shit, Sharky even bangs the broad — and not while he’s drunk or in mourning! The bravado and chest-thumping tends to keep the male/female fireworks somewhat muted, but I’ll never be able to discount the scene where Burt wakes up in bed with a woman and seems to be wholly without regret. And yet he pulls off this line with an Italian pimp: “Somehow I get the feeling that your rear end is puckering up.” There is Brian Keith, however, who seems a bit too fascinated with a transvestite.

Remarkably, 15 people are butchered during this movie, including several that are quite gruesome. Hell, when the whore was blown away at point blank range with a shotgun, I thought I might actually start to like this shit.

Outside of the truly terrible score (especially that song when hooker Dominoe strips) and Burt’s testosterone overdose, this film ain’t half bad. It was a bit much to take when Burt shed tears while watching Dominoe fellate a swarthy Italian, but such sensitivity quickly gave way to all guns blazing. Charles Durning does his best with the Stupid Chief role, and he even threw in a few racist comments to make him that much more colorful. Still, if you’ve seen Otto Preminger’s Laura, you know where this story is going, although without any of the class or genuine intrigue. And sure, the film gives us the tired cliché of whenever a man’s kids are introduced, we know it’s a matter of time before he’s killed. And while the finale contained big thrills and wild stunts, the ending was so abrupt that I wondered if they simply ran out of film.

Not a thing, although as expected, the dialogue is full of “classic” exchanges:

Drug Dealer (to Burt): “Don’t try to talk like a nigger, you sound stupid.”

Drug Dealer (to Burt): “You ain’t gonna shoot when I got this pregnant bitch in front of me.”

Whore (to Burt): “May your prick wither and fall off, ya Nazi bastard.”

***Note: for some reason, the whore was carrying a book about Karl Marx at the time!!!

As a film from the very beginning of Reagan’s reign, it’s more about post-70s malaise than anything related to Dutch’s overt sanctioning of homoeroticism and fascistic sadomasochism. As a connection to Homoeroticism, however, women are treated like absolute shit, as they do not exist at all unless they are silent (and worried) wives, whores, or dead whores. It’s telling, then, that a non-hooker doesn’t utter a single line of dialogue. As a film coming off the Carter era, there’s a certain resignation to the characters, as if they know America’s in the shitter and no one really cares anymore. In many ways, this is the sort if 80s Action film that predicts how insanely right-wing the genre will eventually get. Corruption, filth, crime, and despair will eventually give way to Morning in America, where the scum (liberals, criminals, Reds) will be on the run rather than running the asylum.

The Asian cokehead who is shot, crashes through a window, and falls 80 stories to his death is a wonder because, as I’ve read, it was considered an insanely dangerous stunt at the time. Unfortunately, we have to wait nearly two hours to get to it. The only other memorable death occurred at the beginning, when a pervert with more chest hair than an army of Ron Jeremys is blasted in the heart while he lounges on a rotating bed with an Asian whore. Oh yeah, that drug informant dude got beat to death with nunchucks and steel pipes was pretty cool.