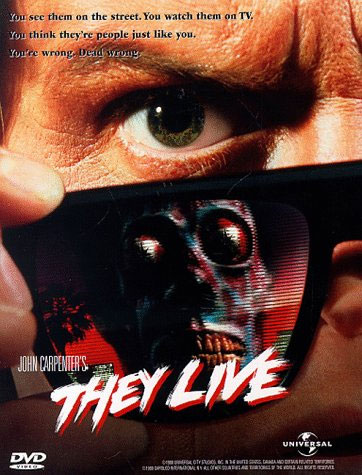 You see them on the street. You watch them on TV. You might even vote for one this fall. You think they’re people just like you. You’re wrong. Dead wrong.

Star, Roddy Piper is as buff as they come and spends much of the film shirtless. He engages his not quite as buff, black sidekick in the most epic fistfight in the history of cinema. It’s a classic case of fighting as a substitute for fucking. From the first jab until the final suplex, the fight lasts five minutes and eight seconds with more ups and downs than an orgy of manic depressives. The fight is due to Piper wanting his friend to put on a pair of sunglasses that will allow him to see the aliens who walk among them, but the gay subtext is abundant. First off, would truly heterosexual men ever fight so violently over a pair of sunglasses?  Moreover, Piper is attempting to get his friend to try something new and to see the world from a different perspective. The friend’s initial objection is that he doesn’t want to get involved in that sort of thing because he has a wife and family. Once Piper finally forces his friend to “put on the glasses,” we have a new convert. The next scene is of the two men checking into a cheap motel. Piper takes off his shirt, dampens his chest and the wife and kids are never mentioned again.

Piper does have a female love interest, but they never even hug or hold hands. She turns out to be on the side of the aliens and, as an even greater betrayal, murders Piper’s buddy. Finally she meets the fate of most 80s Action female love interests: death by shooting. Piper pulls the trigger himself. Take that, evil vagina!

Nada. All run of the mill shootings.

An all time classic. “I have come here to chew bubble gum and kick ass. And I’m all out of bubble gum.”

I love this movie. John Carpenter is a great director. Roddy Piper is the greatest pro-wrestler ever, which makes him an automatic as an action star. He’s much better than The Rock, so it’s a shame that the latter has/had more of a career in film.Throw in aliens and machine guns and what’s not to like?

But it is sort of bad. Piper has an absurdly easy time evading the police. He constantly has his face on TV and a bunch of alien pigs scouring the streets in his immediate area. He just hides in an ally for a few minutes and then everything is fine, until the police are alerted to his presence again and he hides behind a bush for a while and so on.

Not all that stupid. We are all asleep, brainwashed into docility by TV and consumer culture so that a handfull of manipulators can exploit and dominate us. You can impose any number of ideologies on this scenario, from Marxism to “Jews secretly control the world!” Carpenter says he was just fed up with Reaganism and consumerism.