Jonny likes what he saw…

A Quick Note From Jonny: Even though this film came out in 2003, I decided to review it as an 80s Action flick, because honestly, The Rundown would not have been made without the 80s. Seriously, Arnold Schwarzenegger even makes a cameo, as if he is personally passing the torch of hunky beefcake action hero/jerkoff material for closeted straight guys off to The Rock.

Don’t know, but the original title was “Helldorado!”

Boing! Aside from the fact that The Rock unzips William Scotts fly at one point, there is the requisite amount of incredibly chisled men running around a forrest of all places with their shirts off. Also, The Rock has to remove his shirt to apply medicine to his little chest wound. Rosario Dawson, one of the hottest women in Hollywood, has her substantial rack hanging out for half the film and all The Rock does is handcuff William Scott again and again and again. She does manage to kiss The Rock at one point, but it is only after the WWE superstar has injested large quantities of hallucinagenic drugs and has passed out. The Rock probably thought she was a Christopher Walken. Also, many of the characters walk around carrying whips… like more than one. Three guys hanging out in the forrest playing with whips? You tell me. Even though there have been huge strides in gay rights over the last twenty+ years, The Rundown definately asks the question, “What’s so bad about the closet?” 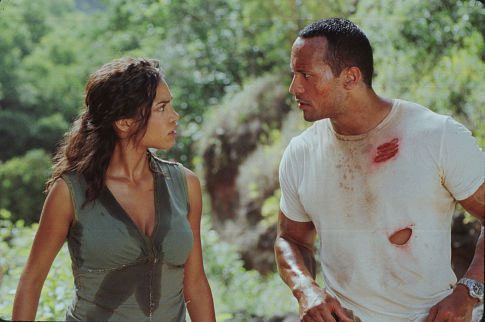 Plenty of on screen murder, but more importantly, lots of ass-kicking wraslin! The Rock beats up at least 4 dozen people in this film, many of them bigger than him. In what is definately the best action sequence of the film, The Rock has to do battle against several teeny-sized Brazilian jijutsu dudes, who, despite their compact size, really kick ass. Though of course, in true Hulk Hogan fashion, The Rock gets beaten senseless for a while, but then he arises and crushes his opponenets. Right before he kills all of them and fucks their corpses, Rosario Dawson waltzes in and makes him stop. Stupid woman… Oh, so like, maybe 30 people die.

I was really suprised at how enjoyable The Rundown was. Equal parts Midnight Run and No Holds Barred, The Rundown was funny as well as ridiculously violent. The Rock really does have some serious charisma and is good at comedy, especially when he is playing the straight man. Chris Walken played Chris Walken. You might think that he is “selling out” but when you experience the sheer joy of watching him make his brother translate the tooth fairy myth into portugese for his goonsquad army, well, you’ll smile. And you will know for certain that Mr. Walken knew exactly what he was doing; an easy paycheck and he had fun with it. So did I.

“I was going to buy you a beer but I think you blew up my bar.”

None really, but the build up to The Rock’s fight with the little pygmie tough guys is pretty funny.

You know it baby! This is the reason why I decided to review this film as an 80s Action movie. No, not because of the massive homosexuality, though that was a consideration. It was the hidden right wing messages! So, the whole movie, The Rock has this little trick he does whenever he disarms a bad guy (which he does like 70 or more times). He pulls the clip out of the weapon and disposes of the bullet in the chamber. “An action hero who deson’t use guns… how lamely this century.” you start thinking. “How modern day Hollywood… Did Drew Barrymore produce this?” you start to mumble. In my mind, it was as lame as the part in T2 where the little kid tells the Terminator not to kill anybody. The Rock explains again and again that he just doesn’t like guns. But then just as you think The Rundown is being brought to you by the Brady Bill… BOOM!!!! The Rock grabs two shotguns and wastes like a dozen guys in under a minute.

Obviously, the NRA gave $50,000 or so to Jack Valenti. The message is (of course) that even though you try really, really hard not to use guns, in the end good men are left with no choice but to pick up a piece and “defend” themsleves. Good intentions don’t work in reality. Guns solve problems in the real world. The real world of course being Brazil, where only the left-wing rebels in the jungle speak the gutter language Portuguese. Everyone sits around speaking English. Oh yeah, so the vernacular left-wing savages/guerrilas, who besides getting slaughtered en masse, really want to kill the bad capitalist dude that Walken is playing. But before they lynch him, Walken delivers a monologue accusing the natives of living under trees and eating dirt before he arrived to exploit them, er, show them the joys of capital. Without the whiteman in the funny hat, they’d all be dying of mongoose bites, etc. Philosophy wise, it is a wash between the Bananas style Marxism of the natives and the robber baron’s credo being expoused by Walken. Reactionaries in the audience will be stoked that the white businessman gets the last word in. All by design, of course. 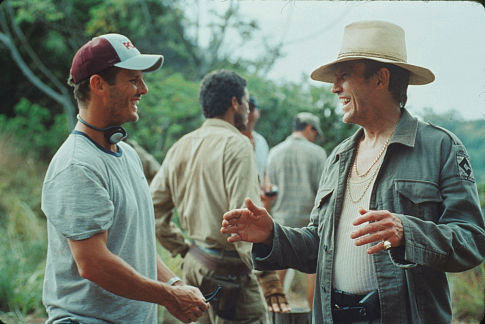 Not so many funny deaths as there were funny beat downs. The Rock at one point jams a gun into a guy’s mouth who only seconds earlier had been holding the gun. Also, The Rock beating on an obviously weaker Seann William Scott was a joke that never got old. Even better though, was when the baboon started humping The Rock‘s face. I loved that.

No, but there was this ludicrously long falling-over-a-cliff scene that was longer than when Homer tried to jump the gorge.