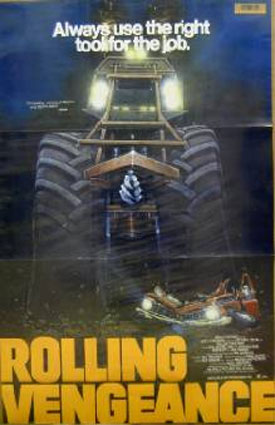 Matt’s IQ is going down…

“Always use the right tool for the job.”

Homicidal trucker runs over yokels who killed his family.

Remarkably little for a movie as macho as this one, although we do get a leather-clad Ned Beatty as Tiny Doyle, the local kingpin who owns a bar and used car lot. Tiny’s trashy sons do touch each other quite a bit, and there’s a lot of talk about penis size. There is also an arm wrestling scene in a bar, although any homoeroticism is undermined by the topless women that dance nearby. The main character, Joey, does have a girlfriend, but their sex scene is so brief and un-erotic that it could be seen as an advertisement against heterosexual intercourse. I also saw several close-ups involving cigar chomping, as well as an extended music video sequence where Joey builds his killer monster rig. Amidst shots of welding, steel, and sweaty biceps, we hear a song called “Coming Up On You This Time” with the chorus “I’m coming, yeeeeesssss, I’m coming…..” If such a lyric is heard while a man is performing manual labor, there can only be one interpretation. And what about that tagline???

A rather dismal eight, although only one person (Tiny) is killed in the traditional (gunshot) manner. Every other person who dies is either in a truck or under one.

Clearly this low-budget mess did not make it to theaters, and I’m shocked it even had a video release. It’s hard to argue with the tape jacket’s assertion that this is “the definitive monster-truck movie,” although I don’t exactly have a frame of reference for what must be a limited genre. Plot points are telegraphed miles ahead of time, which is always the sign of a film that appeals to middle-American lunkheads. For example, when we see two women passing out fliers about the dangers of drunk driving, we know that within several minutes, someone will have died in just such an accident. If a husband tells a wife how much he loves her, she will be dead (or savagely raped) by the next scene. In this case, the wife in question is killed by Tiny’s drunken sons in a traffic accident, although Joey’s girlfriend is later raped. Still, if one expects big rigs, a few bare breasts, a drunken brawl or two, and lotsa hootin’ and hollerin’, then I can’t think of a better way to spend a Saturday night.

Nothing post- or pre-mortem, but a few good lines that sum up the overall sophistication of the film:

“Some day someone’s gonna punch you in the mouth and ruin your sex life.” (This could also be featured under Homoeroticism)

Sheriff: “No enemies, Tiny?” Tiny: “Not since the gooks.”

(Tiny to his six sons): “Your mothers would be very disappointed in you.”

Given that this movie explicitly endorses violent revenge, it clearly signs on to the Reagan Revolution. Moreover, the drunken louts who kill Joey’s mother and two sisters are set free and fined $300 by a judge who says, “I only apply the laws; I don’t make them.” A sympathetic sheriff also covers up Joey’s crimes, which can only mean that deep down, lawmen appreciate the efforts of gun (or truck) wielding psychos. Still, there is a message from Mothers Against Drunk Driving (M.A.D.D.) and throughout, it is implied that liquor is the root of all evil. The bad guys are all drunks (one even owns a bar), while the good guys are chaste and pure, with the exception of a kiss or two. And I’m not sure how to interpret the film’s decidedly anti-hillbilly stance. Normally right-wingers pander to “the people” (especially racist Southerners who cry states’ rights at every turn), but this film suggests that the white unwashed and uneducated are committing crimes in our land. There’s not a brutal black man or evil Hispanic to be found! That very fact could be seen as the film’s secret wish to have a world without minorities, so who knows. Still, I was stunned to see a rape committed by a toothless twit wearing a Confederate flag t-shirt.

The very fact that only one person is shot is itself a novelty. In this case, Tiny is shot through the forehead. The most original death, therefore, must be when one of Tiny’s sons is crushed beneath a massive monster truck tire. The filmmakers seemed to recognize the unique opportunity as they filmed the death in slow-motion.

‘Tis a good thing to kill crackers. And that Ned Beatty is the last person I want to see in leather.