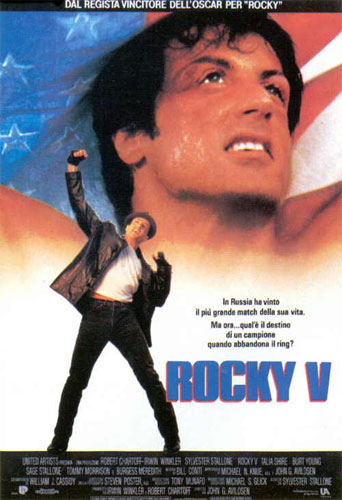 Matt Cale takes one for all time…

“Go for it!” (easily the lamest tagline in the entire 80s Action Guide, which is a hell of an acomplishment if you think about it.)

Rocky’s flashbacks are a little too heavy with shots of Ivan Drago and Mickey. Strike that — that’s all they are. And what can be said about a man who simply can’t get over oiled pecks and a verbally abusive father figure? Moreover, Rocky takes a young fighter named Tommy Gunn (!) under his wing, although the two eventually break up, but not before they hiss and spat in public. In the homoerotically charged final scene, the two have a wild street brawl that has everything but the two taking off their clothes. Men do not fight each other with this amount of passion and force unless they love the fuck out of each other.

Not one bloody person bites the dust. Couldn’t they have at least killed off the drunken Uncle Pauly? Especially after he gives away the Balboa fortune to some crooked accountant.

Not bad enough, apparently, since I’ve watched the fucker twice in the past week. The “bonding” scenes between Rocky and his son are cringe-worthy to say the least, as are the “headaches” he experiences as a result of his brain damage. And the fight promoter, George Washington Duke, supposedly a Don King type, comes off more as that Jackie Chiles character on Seinfeld. And yes, dear ones, Tommy Morrison makes even Sly appear a master thespian. Where was Brian Bosworth to make it a complete circus?

Post-Mortem (or Post-Punch to the Gut) One Liner:

Rocky’s response to Duke: “Sue me for what?”

Fur coat-wearing black men are the root of all evil, seducing our muscular young white men with money, women, and power, only to betray them in the end. Duke’s “Only in America” comment after Rocky defeats Gunn in the street brawl reveals more than the filmmakers know — only in America could an untalented, marble-mouthed ex-porn star make five pieces of shit based on the most clichéd premise in film history.

Eventually, of course, Morrison will succumb to his illness.

Union Cane is not the most ridiculously named of Stallone’s characters, but it’s close.