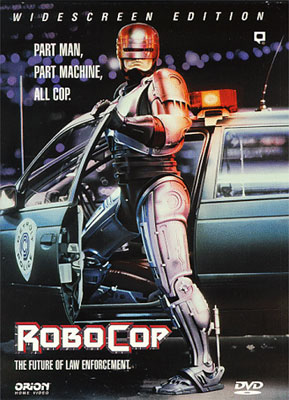 A cyborg cop kills both street and corporate scum.

None. Robocop doesn’t even have a penis or an ass. I’m having a hard time even thinking of something to deliberately misconstrue as homoerotic. Here’s the best I can do. There’s a scene at urinals where the guys talking seem to become more animated and outgoing with their zippers down.

Only 25, but this is a clear case of quality over quantity. Those 25 corpses really count, but only if you have the unrated, director’s cut. In that cut you can see, among other things, Murphy literally being blown to pieces by the dad from “That 70’s Show.” And since Murphy survives his shooting, that gory scene doesn’t even register on the corpse count.

There are several to choose from, but one stands out. A bad guy drives his truck into a container of toxic waste and comes out an oozing, bubbling mess. He stumbles around, begging for help, until being struck by a car and exploding like a balloon filled with chum.

A would-be rapist uses his would-be victim as a human shield. Robocop fires a shot that goes through the woman’s skirt, between her legs and hits the rapist in the cock.

There are several to choose from, including the catchphrase within the film that became a minor catchphrase in real life: “I’d buy that for a dollar!” My favorite, however, is when the crime lord walks into the home of a victim who is partying with a couple of hookers and flatly says, “bitches leave.” When the bitches leave, the crime lord shoots the guy in the legs five or six times and leaves a grenade on his coffee table.

Was there a “Stupid Chief?”

Sort of. There’s a Stupid Sergeant who is always yelling about how the police shouldn’t go on strike, even though 2 or 3 are being killed every day. Unfortunately, since the police are controlled but a corporation, the sergeant didn’t have the power to ask for Robocop’s badge and gun. Plus, I don’t think Robocop even has a badge to begin with.

What, are you kidding? Robocop kicks ass! Arguably the high point in the career of director and insane Dutchman, Paul Verhoeven. A personal favorite and not just among 80s Action.

Robocop is a pretty effective satire on corporate dominated culture, although this was certainly lost on most viewers. The news show in this film is Fox News. How Verhoeven and screenwriter Ed Neumeier were able to foresee and lampoon the coming of Fox News way back in 1987 is beyond me.

The old PC code according to which, if the hero of a film is white, all of the street criminals must also be white, is ridiculous enough as it is. It’s even more ridiculous in this film, which is set in Detroit. For foreign readers who may not know, Detroit has about the same racial make up as Nigeria.