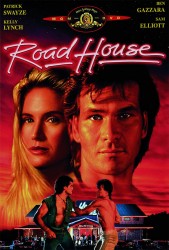 “Dalton’s the best bouncer in the business. His nights are filled with fast action, hot music and beautiful women. It’s a dirty job, but somebody’s got to do it.”

Swayze beats up, then kills, many men.

Well, let me start by quoting from the movie, “I used to fuck guys like you in prison.” So, obviously, this film is gay. In fact, that same character, just minutes earlier, mutters, “Your ass is mine, boy.” However, Road House may be the only bisexual 80s Action movie out there. Normally we call leading ladies in these movies beards because the heroes regard their women with almost as much disdain as they do the bad guys, but there is just no way to justify how much time Swayze spends naked and banging Kelly Lynch. Don’t get me wrong, Swayze absolutely oils up his chest before Tai Chi, especially when he knows Ben Gazzara and his hillbilly landlord are watching. Hence, the bi-sexuality. Though it should be pointed out that both Swayze and Lynch looked confused and almost lost during the big love scene. Could be that the writer/dircetor of Road House simply had no experience to go on, so the all the man-on-woman sex was improvised. Most likely it was Swayze’s first time with a woman.

7 people die on screen, which is low, until you realize that no fewer than 471 mullets are present in Road House. I feel that the Mullet Count more than makes up for the Corpse Count. Seriously, two out of three men in this movie were claiming business in the front, action in the back. The Mullet Count was so off the chart that even the fucking firemen had mullets.

Road House is a very guilty pleasure. It is ridiculous, dated, and pretty silly, to be sure. Nonetheless, this movie is fun. Fully one third of the film is a bar fight. Who doesn’t love people getting bashed over the head with bottles? You don’t? Commie! Tables break, bodies fly, tough guys grunt. And for some reason, all the characters are way into kicking each other in the knees. Road House is basically what professional wrestling has always been. Big, dumb, loud, gay, and loads of fun!

There are some really bad things–on the surface–about Road House, but taken within the context of the film, they are just fine. For instance, one character drives a monster truck. Not just a big truck, but an actual wreck-crushing, Carzilla and tractor-pull monster truck. He just drives it around town and then through a Ford dealership, smashing at least four station wagons. At one point, Swayze unnecessarily karate kicks a door open while rushing into a burning building. In one of the several knife-fight scenes, John Doe’s nose is clearly bloody before Swayze delivers the first punch. Damn hemophilia…

Lots more dumb assedness is found and forgiven. Swayze’s character, Dalton, has a degree in philosophy from NYU. Kelly Lynch’s character is an MD. She admires the stitching Dalton has done on his own arm (from knife fight #1). He refuses anesthesia (for knife fight #2), because, “Pain don’t hurt.” I think Nietzsche used to talk about that. Or was that Kant? Terry Funk is in the movie. Gazzara, the evil rich guy, likes to scare horses with his helicopter, because he’s mean. The movie opens with an 80s-style hot blonde climbing out of that decade’s most ridiculous car, a bright red Ferrari Testarosa. Which makes sense seeing as how Swayze is that decade’s most ridiculous celebrity.

On the plus side, Road House offers what is arguably the best soundtrack of all the 80s Action movies.

There are several, but I think my favorite has to be what Swayze says after the nerdy, yet earnest girl asks him if he has a name: “Yeah.”

The other real good one is, “Now, it’s the kind of place where they sweep up the eyeballs at closing time.”

Not too much. This is sort of your standard vigilante, one man takes on the mob, the police don’t mind if you kill only bad guys, type of picture. More childish than actually right wing. The message really is that people who are really good at fighting will actually solve problems and get somewhere. Because they can fight.

Still, Road House is a Reagan Era Action film. Swayze fires one barmaid for dealing drugs, exclaiming, “We’re here to sell booze, not drugs.” He also fires a bouncer for having sex (with a woman). See above.

Swayze (while topless) rips another guy’s throat out with only his bare, oily hands. Even more telling is that after Swayze kicks the now neck-less victim into the wading pond that separates his home from the bad guys’ (for reals), it is pretty apparent that Patrick has a boner. Note to future gay action heroes out there; don’t kick ass in sweat pants.

Are You Working On The Script For Road House II

Oh, and in the next life, I’m coming back as Sam Elliott.