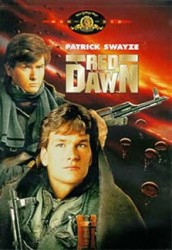 “In our time, no foreign army has ever occupied American soil. Until now.”

Communists invade America; teenage gun nuts save us all.

Given that the story involves a group of high school boys who live in the woods after Communists take over America, there is surprisingly little homoeroticism. There are a few hugs and high-fives, as well as an impromptu football game, but the teens are too busy fightin’ and killin’ to exchange loving glances or rub oil on their chests. And, because the film takes place from September through February, the boys are fully clothed without a single pec or ass cheek to be found. A few scenes qualify, but fail to stand as obnoxious displays of overt male-on-male love. For example, a boy is forced to piss on a radiator. Also, two women enter the group and are not fucked. Finally, two brothers cuddle at the end as they die in the snow. Young men are indeed put on display as the best of America, but we are meant to admire their killing instincts rather than their perfectly chiseled forms.

At least 117 people are killed, although the count is probably 10-15 corpses higher as a few truck explosions left me scrambling to count the dead. [Ed Note: Guinness at one point rated Red Dawn as the most violent movie of all time because China got nuked.]

If you are a fan of watching bloodthirsty Commie bastards kill sweet-natured middle Americans, this is your type of film. Of course the entire thing is political propaganda, as well as being a maddening bore. It’s also wildly overlong at 114 minutes, most of which consist of watching the group of teens (calling themselves the “Wolverines”) kill a few Russkies and then retreat. Repeat ad nauseum. I suppose if this were 1984 and I was paranoid as hell, I would be in heaven. As it stands, the film is simply too ridiculous for words.

Only one, surprisingly enough. As Patrick Swayze shoots a Russian officer (and is shot in return) he utters, “You lose.” Yep, that’s it. I’m afraid the screenplay is much too humorless to give us anything resembling a memorable one-liner.

As a slab of paranoid, right wing propaganda, no film will ever top Red Dawn. Released in the same year as Reagan’s re-election campaign, the film was no doubt intended as a cautionary tale for lazy, complacent liberals who thought the Soviets weren’t a real threat to our way of life. The film opens with a political context, and we read that in West Germany, “Greens” have been elected with the sole mission of removing nuclear weapons from that country. From this I must assume that environmentalist wackos are being held accountable for the loss of Europe, if not the world, to Lenin and his cronies. More than that, though, this film is the greatest example of an NRA recruitment piece that I have ever seen. “See,” the filmmakers seem to be saying, “without individual gun ownership those kids never could have fought back and the nation would have been lost!” The film even states that when the Commies set up their bases, the first people they seek out for extermination are those with guns. One of the colonels says that since their names are recorded, they will be easy to find. Get it? We must eliminate background checks and gun registration or else the Commies will know who we are! From all accounts, the Second Amendment was written just for this very purpose; so that when the evildoers come for our wheat, we can take up arms and save civilization. After all, if the bombs fall and the armies are tied up elsewhere, who else will kill those red sons-a-bitches?

Given that this is a John Milius film (a self-described fascist, I might add), the kids are easily and happily transformed from passive pussies into hardened killing machines within a few days. One of the kids even says, in response to a question about how it was to kill a man, “It was good.” Red Dawn, therefore, lays bare the true ideas of the extreme right-wing in this country and what they want us all to be — god-fearin’, gun-lovin’, and willing to kill for the Stars and Stripes. And finally, just for good measure, Europe is said to be “sitting this one out,” which is another way of saying that them Europeans is just a bunch a no-good, Commie-lovin’ atheistic assholes. Republicans then, Republicans now.

Alas, not one person dies in an unconventional manner. No silly gadgetry or outrageous stunts are to be found. Just guns, grenades, rocket launchers, helicopters, and fighter jets. Yawn. The closest we get is Jennifer Grey getting shot immediately after eating an orange. There is, however, a scene involving the slaughter of a deer and the drinking of its blood. [Ed Note: Fuck yeah!!]

Had Ronald Reagan not been elected (and been so damn macho), the Soviet Union, Cuba, and Nicaragua would have landed on our shores and made slaves of us all. It is also acceptable to have 30,000 handgun deaths a year just in case the Commies come knocking and we need our firearms handy. Or instead, the pussy liberals could just make it easier and let us own tanks.