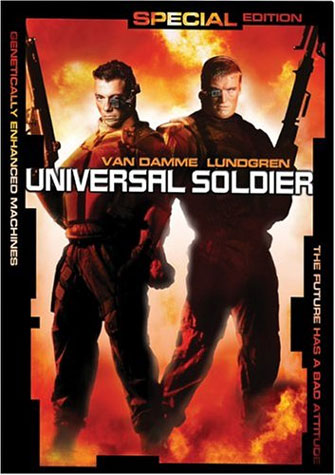 The Future Has a Bad Attitude.

Ghosts of Vietnam are no match for Belgian ass.

Well, to be honest, I was initially confused by the early appearance of the female lead. Shes a tough-talking, chain-smoking maverick reporter who had at least as much screen time and twice as many lines as Van Damme. Thankfully, she went by the name of Ronnie, never flashed her tits, and had a deep, husky voice, so in a pinch I could pretend she was a drag-queen. As it turned out though, Universal Soldier went light on the overt homoeroticism anyway, save for a few glorious shots. One involved the high-tech sauna the Unisols returned to after they completed their mission, where they all stripped down and relaxed together (if the Nostromo had a bathhouse, it mightve looked like this). The money shot came midway through the movie, though, during the motel sequence. You see, the Unisols have to stay cool (something to do with the advanced technology involved in their creation) and Luc (Van Damme) is pretty darned flushed after his recent getaway.

So when he gets to his room, Luc cranks up the a/c, strips off everything but his socks, and were treated to a slow-pan, from his ankles up past his glistening calves, past his taught ass, right up to his broad, rippled back. By the time he turns to the camera and flashes us a droopy Im pretty drunk but I can still get it up smile, my little Unisol was standing at full attention. We get another shot of his ass when he walks out of the room, proclaims again he has to cool down (me too Luc!) and faints. Ronnie the reporter packs him butt-naked on ice in the bathtub, but, true to 80s Action, theres nothing happening between those two. Lastly, throughout the film, Sgt. Scott (Lundgren) gets progressively campy, strutting and yelping with growing hysteria as we near the climax: a fight to the death (in mud and rain!) between the two men, which revolves around Lucs refusal to shoot Ronnie (a scene which itself echoes the initial confrontation between the two men in Vietnam). In the end, Scott really just wants Luc to forget the girl and obey his commands. Yes, Daddy.

A paltry 24 confirmed kills. However, if we include the various Unisol deaths (these guys get shot and blown up several times over) as well as all the corpses laying around on set, we can bump it up to a respectable 51.

Shit, this thing stars not one but two of the greatest B-list stars of 80s Action. This is a role Van-Damme was born to play – emotionless, blank, and with precious few lines. Lundgren struts around and mumbles his way through it, chews a bit of scenery, and even drops several cringe-worthy one-liners (Do you wanna play catch? and Are we having fun yet?) during the high-octane chase across the desert, as he lobs grenades out of his armored Winnebago into Luc and Ronnies bus. The plot is very thin (we never even get much into the purpose of the Unisol program), serving mostly as a vehicle to carry the Vietnam back-story. There are a couple of first-class explosions and some nicely done bullet wounds, and the reporter is probably worth a grudge-fuck. But seriously, Ill pass on the street-smart babes, and get myself another helping of greasy man-steak thank you very much.

Dolph’s got the most, from the pointed wit described above to several retorts about listening. (Hes got a fascination with severed ears, which he likes to string into a necklace, Michael Herr style.) Surely the best of these is delivered after hes recovered his Vietnam experiences and habits, and has taken over the Unisol operation. The Chief Scientist approaches him and asks, Sgt. Scott, may I have a word with you? Scott turns toward him, proudly displaying his grisly handiwork, and mutters, Im all ears. Uh-huh.

This one comes straight out of the Schwarzenegger playbook. After Luc finally dispatches Scott by feeding him through some kind of thresher that shreds him up and sprays the chunks into the air, Luc staggers over to Ronnie (who has somehow inexplicably survived a direct hit by one of Scotts grenades, but is still out of it), who asks, Where is he?
Luc: Around.
Brilliant.

Not so stupid, actually. This is by far the most interesting and complex aspect of the film. Basically, youve got 80s-style Vietnam revisionism filtered through a Desert Storm lens. The film opens in Vietnam, 1969. Sergeant Scott has gone nuts, wasting a bunch of villagers and threading a necklace of their ears. Hes discovered by Private Luc, the wholesome farm boy from Louisiana, who naturally wants to know why Scott killed em all after the village had been cleared. Well, theyre all fucking traitors, arent they? Theyll stab you in the back if you give them the chance. Well, Luc doesnt want any part of this shit, as his tours almost up, and he just wants to go home. But Scott, well, hes stared into the abyss, and as he puts it, It doesnt just go away. You just cant walk away. You hear me? [Rattles ear necklace.] Scott wants Luc to prove hes not a traitor too by executing a few more gooks. Of course, Luc disobeys the order, grabs a girl, and flees. But he doesnt get very far, and the fight that follows results in their mutual deaths. When all the bodies are discovered, the army officially calls it MIA, and spirits the boys away to be reborn as super-soldiers of the future. So what we have here is the Vietnam War recast as essentially a tragedy wherein America went to war with itself; where we devoured ourselves, torn between our noble impulses and our murderous instincts. The Vietnamese themselves were incidental to our own inner struggle, a struggle between the valiant America and the savage one. Stone dissected this problem a long time ago in Platoon, but he didnt think to drop Charlie Sheen into Desert Storm to resolve it. Duh.

So jump ahead to 1992, and weve kicked the Vietnam syndrome, like you would any pesky ennui, by plunging into work (in this case, launching a heavy load or two up some Republican Guard ass). In case you miss the point, Luc and Scott (now GR44 and GR13, respectively) have traded in their green jungle duds for some crisp new Desert Storm fatigues, and are deployed with the other Unisols (I think I saw Hulk Hogans old nemesis Zeus in there) to take out some terrorists, who have holed up in a power station with a bunch of hostages, demanding that the government free their imprisoned comrades. Unfortunately, the ethnicity of these evildoers is unclear – could be South American, could be Arab – but whatever they are, theyre Bantha-fodder. Anyway, the sight of the huddled and crying hostages provokes memories of Vietnam in GR44, and, well, its only a matter of time before Scott and Luc are at it again. To throw a bit more wood on the revisionist fire, when the (illegal) Unisol program starts to come unglued, Chief Scientist (wait for the name) wants to come clean to the public, to the dismay of the Colonel in charge.

Chief Scientist: We have a moral obligation to tell the truth about this.

Colonel: I thought you were more clever than that, Woodward. This whole goddamn program is off the shelf. Do you really think for one second those wimps at the Pentagon would allow the regeneration of dead soldiers? If this is uncovered now, were all going to jail. Do I make myself clear?

As an unmuddied lake, Fred.

In a similar vein (again, in case you missed it) while Luc is cooling off at the motel, the TV is on in the background, and theres Tricky Dick himself, first talking about Vietnam, then his pardon, and finally his apology, before hes literally blown away by the awesome firepower of the Unisols, who have shown up to collect their errant comrade. Case closed, Id say.

Did I mention that the Unisols have to get their memories cleared periodically? This is done by the automatic insertion of a big-ass needle into the base of their skulls when they sit down to relax in their sauna. Well, when Scott is consolidating his control of the Unisol operation, the Medic (yep, the disposable black guy) gets the memory clearance needle through the cheek. Somehow this kills him. As a side note, this poor dude deserves praise for proclaiming, I think homeboys starting to like this shit after Scott corpse-kills a terrorist by stomping his face after hes snapped his neck. Oh, and he also gets all the shit-jobs in the Unisol operation (presumably the ones only the Mexicans would do, if there were any).

Two things:
Hyper-acceleration is the key to turning dead flesh into living tissue. And when youre suffering from PTSD, just about everyone is a fucking gook traitor.