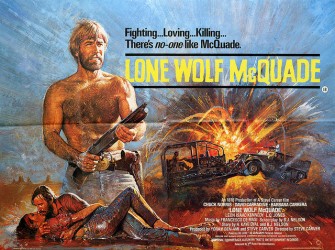 Given that Chuck Norris does kiss a woman in this film, it wouldn’t be honest to claim that this is a big gay fest. Still, there are more than enough hairy, exposed chests to go around. In particular, Norris insists on being filmed completely shirtless whenever he is firing a weapon. The best example of this is when Norris performs target pratice in his yard and rolls around in the dirt. There are also plenty of quotes that could be taken in a homoerotic context. “I’ll take old hamburger face home and patch him up,” could be interpreted in several ways, as could McQuade’s retort to a midget: “I’m gonna have your little ass.” In that same scene with the midget, McQuade shoots back “Mine’s loaded” to the midget’s “As you can see, mine’s bigger” as they compare “guns.” Then, later on, when McQuade is facing certain death, he pours beer all over himself for no apparent reason, unless of course we needed to see his chest hair glisten one last time.

A respectable 58 people lose their lives, most of whom are gunned down. Several others meet their ends via grenade, while a few others have knives thrown into their chests. We don’t get to see a lot of blood, however, until the final confrontation between McQuade and David Carradine. Even then, it’s only because they engage in a five minute karate fight.

I’ve seen worse (even by Norris himself), but it simply cannot be defended in any substantial way. The plot is simpleminded, the acting forced, and worst of all, the crime boss is a Mexican midget in a wheelchair. I can believe a lot of things, but not Senor Sausage Fingers as a kingpin. At the very least, such a character violates my belief that the world has never produced a successful midget who wasn’t in show business. The film also fails because it tries to be a Spaghetti Western, complete with Morricone-style music and exaggerated close-ups. Think of it as The Good, the Bad, and the Well-Oiled. And all credibility is thrown to the winds when Norris, buried alive in his truck, manages to drive through tons of dirt to safety.

One in particular stands out. McQuade’s partner is taunted with the line, “Remember me, greaser?” The man is promptly shot, leading to the response, “I never forget an asshole.” As for other bizarre lines, a federal agent who looks like a young Billy Dee Williams tells a partner (about McQuade), “He knows this terrain better than you know the warts on your wife’s backside.”

Being an 80s action film, all agents associated with the federal government are incompetent and unreasonable. McQuade even calls them “Candy-ass feds.” We even learn that some pussy Senator (not named, but most likely Ted Kennedy) wants to take funding away from the Texas Rangers. McQuade is a typical 80s loner who hates his boss and believes that he can wipe out crime as long as he does not have to obey the law. Other scenes demonstrate that it is perfectly acceptable to beat, intimidate, and threaten suspects, if not outright kill them. To insist on proper interrogation techniques would be seen as bleeding-heart liberalism at its worst. And when we see McQuade’s home, it is stuffed with American flags, guns, and hunting trophies. It doesn’t get any more right-wing than that.

Carradine crushes a man’s throat with his foot, but other than that, everyone is killed in a conventional fashion. For the most cliched death, the woman McQuade loves is shot, cradled in his arms, and manages to whisper “I love you” right before she expires. McQuade mourns for all of three seconds before he kills again.

El Paso, Texas is one ugly city. And that it is possible to be kicked in the mouth at least a dozen times without losing one tooth.