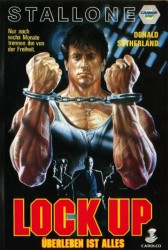 “He is only six months away from freedom. But a warden obsessed with revenge wants to take his future away.”

It’s a goddamn prison picture with Sly Stallone for chrissakes, what in the hell were you expecting? While Sly’s character (Frank) has a girl on the outside, it’s a man’s world in Gateway Prison, one of the nation’s hardest. After his transfer to Gateway, Frank is called “white meat” by an unseen prisoner. A few minutes later, he enters a de-lousing chamber wearing only tight, skimpy underwear. Frank also spends the majority of the film in his boxers (in the isolation cell, labeled “The Hole”) and when dressed, wears a skimpy muscle shirt and never seems to be anything less than magnificently oiled. Another character, Dallas (Tom Sizemore) asks a guard to look up his ass for a missing watch, while a 6’7″ buff black man bonds with Frank over their mutual love of cars. And, being a prison film, numerous guards make kissy faces at the prisoners. There are several shots of muscled hard-asses doing push-ups, as well as an endless football game in the muddy prison yard. And did I mention the extended sequence (set to music, of course) where Frank and his buddies work on a car, labor that apparently necessitates a paint and water fight? The only other instances of overt homoeroticism occurred late in the film as Frank and his buddy get drunk on prison hooch and flirt, and during a cockroach race, Dallas reveals that his bug is named “Rear Entry.”

Only four die in the course of the film, which seems a bit unrealistic considering it is set in America’s worst prison.

Considering that the film opens with sentimental music and appears to take Frank’s plight seriously, it is very bad indeed. There is also a speech by Stallone that equals, if not surpasses, the incomprehensibility of his First Blood rant. His monologue is so garbled that I kept hoping for subtitles. Amidst the grunts, slurs, and howls, I believe I heard something about the evil warden “owning everything,” but don’t quote me on that. While I wasn’t expecting insightful drama, it would be nice to see a prison film that didn’t haul out the standard clichés — sadistic wardens, prison “bitches,” escape plans, and at least one scene in the chow line. And is it necessary that the warden be so evil that he re-builds electric chairs in his spare time?

None to be found, I’m afraid, although Warden Drungoole (Donald Sutherland) has the best line: “This is hell, and I’m going to give you the guided tour.” No prison film would be complete without some derivation of that eternal chestnut. Stallone also bellows “Rape this!” before punching a guard in the balls. I’m not sure what the fuck that means, but it sure sounds macho. And gay.

Surprisingly, there is very little political grandstanding. Released in 1989, Lock Up might have been a sign of post-Reagan healing, as the Gipper never would have allowed a sympathetic portrayal of a prisoner, let alone several. The film even hints that people have been falsely accused and sent to jail unjustly! While no polemic, the film certainly earns a medal for being somewhat centrist, with a fascist like Stallone aboard and all. There is talk about the “bleeding heart politicians” and the rotten media, but as these words are spoken by the evil warden, they can hardly be considered an endorsement.

One of Frank’s buddies is killed after having a barbell dropped on his chest. Two more (including Dallas) die after being electrocuted, and the final death is some anonymous prisoner who is stabbed in the back during mealtime. Far from a novelty, however, it is a requirement of all prison films that at least one man meet his end while spooning up his slop.

As Frank states, “D.T.A. — Don’t trust anybody.” And, thankfully, there is at least one prison where brutal rape isn’t a daily occurrence.