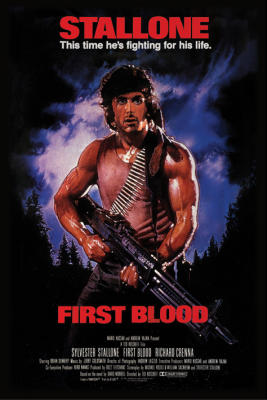 What you call hell, he calls home.

Entire Story in Fewer Words than are in this Sentence

Rambo is gayer than sexual intercourse between men. To start with, the movie and the protagonist are fucking called Rambo. But only because Buttfuck was already taken. There are several porn-style, extreme, extreme close-ups of male flesh. The gayest by far is a shot that pans down Rambo’s bulging, sweaty bicep to the enormous knife he is sharpening. Rambo does have a female love interest, but literally 10 seconds after he kisses her for the first time and agrees to take her home to America, she is mowed down by the VC. It reminds me of how, in older movies, gay characters were always punished by meeting horrible ends, as documented in The Celluloid Closet. This time, however, the viewer’s and/or filmmaker’s inner, catty homo is the one doing the punishing. “No you don’t, you fucking fish! That’s my man!” Finally Rambo wrestles a super-buffed out Russian in a scene that must have had millions of repressed, Reagan-voting men looking nervously about the theater as they held popcorn containers over their laps.

Rambo shoots a dirty VC in the head with an arrow that goes all the way through his skull and sticks him to a tree.

Honestly, not as bad as I remembered. Not that it’s anything but terrible. For example, Rambo’s guide is this Asian chick who speaks broken English, saying things like, “what mean, ‘expendable?'” The problem is that she has no actual accent whatsoever. None. Also, Rambo is one of the funniest cases of a movie in which the good guy is an absurdly good marksman and the villains couldn’t hit the broadside of Jerry Fallwell’s corpse. The marksmanship disparity was hilariously parodied in the “Weird” Al vehicle, UHF. At least it was hilarious when I was twelve. Also, when Rambo finds the first POW, he’s a scrawny, bearded man with longish blond/light brown hair who is literally being crucified. I think it was supposed to symbolize something.

Roughly 75 commies are sent straight to hell by Rambo’s cock. Bow, I mean his bow.

“Do we get to win this time?” Rambo famously asks. It’s the childish assertion right-wingers love to make about ‘Nam: “We coulda won but we didn’t wanna! It’s the hippies’ fault! The dog ate my bazooka!”

Stupider still, the film was apparently intended to have a serious political message. James Cameron and Sly wrote Rambo believing in the truth of its premise: the VC were secretly holding POW’s to negotiate for war reparations. Kind of like how the Russians have a secret doomsday device to deter nuclear attack in Dr. Strangelove.

American soldiers in Vietnam were all white. The VC were really out of their element in jungle combat. Their conventional tactics made them sitting ducks for tricky, American guerillas like Rambo.