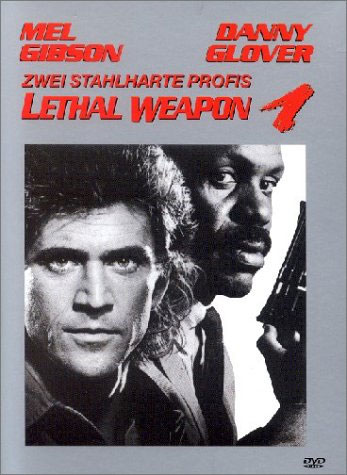 “Two Cops. Glover carries a weapon…..Gibson is one. He’s the only L.A. cop registered as a Lethal Weapon.”

More than I ever expected, I must say. Hell, when we first meet Danny Glover, he’s soaking in the tub! Even better, the first thing we see of Mel Gibson is his glistening, bare ass! From the very first meet-cute, Gibson and Glover are like a pair of bickering old hens, which always means that they insult each other to avoid admitting that they want to make out. Typically, for any 80s Action piece, the two partners compare cocks — I mean guns — at a shooting range. Surprisingly, Gibson’s is bigger and far more accurate. There’s also a shared wink (so flirtatious) and the line where Gibson says, “What are ya, a fag?”, but things don’t get full-tilt homoerotic until Gibson is hung by his hands while shirtless. And yes, he’s being sprayed by water while this is going on. The electroshocks also add to the fun, as Gibson shudders and convulses like he’s in the throes of passion, which he no doubt is. And the final battle between Gibson and Gary Busey? A homoerotic masterpiece my friends. First, they’re fighting in sprinklers and both soaking wet. Second, Gibson is shirtless. Third, they roll around in the mud while grunting, screaming, and hurling macho insults. As a topper, Busey is eventually subdued with his head between Gibson’s quivering thighs. Oh behave!

A pretty respectable 26 are killed, although most are bad guys, which is always less interesting than having innocent civilians run down in the streets or thrown from high places. Thankfully, there’s a healthy mix — shootings, beatings, suicides, and exploding corpses.

In many ways, this is a perfectly respectable 80s Action romp, as its clichés set the tone for other, lesser films. Still, it is rather by-the-numbers, including Glover’s oft-repeated line, “I’m getting too old for this shit.” Gibson’s Three Stooges crap gets tiresome quickly (and come on, the “suicide counselor” bit is overrated), and his Michael Landon inspired hairdo is tough to swallow. Still, for fans of crashing glass, disgruntled vets, ex-military drug runners, exploding cars/houses, and wild shootouts on the freeway, you could do worse than Richard Donner’s efforts here. And as bad as it is, Busey’s line, “It’s goddamn Christmas!” as he shoots a television is surely one of a kind.

Outside of Glover’s cackle after the main bad guy’s car explodes, there’s nothing post-mortem that I could find. Still, I did find a few groaners outside of a death context:

“All dressed up and no one to blow.” — Glover to a whore

“You ever meet anybody you didn’t kill?” — Glover to Gibson

“Let’s get the flock out of here.” — Gibson, after setting it up with, “Let’s do what one shepherd said to the other shepherd.”

“Get that shit off my lawn!” — Glover, concerning Busey’s heap

With Joel Silver’s involvement, we know that all women will be either naked, dead, or complaining about something. Misogyny reigns in this universe, and it’s telling that no woman has any important dialogue that doesn’t involve prostitution or drug use. And because it’s the Reagan era, drug kingpins are the number one baddies. Per Lord Ronnie’s instructions, violent death is made to order — funny, exciting, and always delivered with extreme prejudice.

Clearly, the opening scene where the half-naked chick jumps to her death was not topped for sheer inventiveness. Still, it was great to watch a shirtless Gibson snap some dude’s neck with his legs.