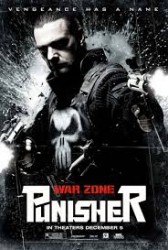 Judge. Jury. Executioner. All in a day’s work.

This move was sufficiently queer, but could have been gayer. One scene takes place in a bar that has bouncers who are wearing leather gear for some reason. I was waiting for them to break into Turbo Lover. the Punishers former buddy and partner, Louis Gossett Jr., visits him in prison, after hes nabbed by the cops. Gossett grabs the Punisher and shakes him vigorously for nearly a full minute; repeatedly shouting let me in! The highlight of gayness, however, is clearly Dolphs sessions of prayer and meditation during which he sits in front of candles and asks Jesus if he should kill more bad guys. Oh yeah, hes naked and oiled up like a bowling ball during all of these sessions.

A very impressive 93! Plus the Punisher beats, maims and tortures plenty of bad guys without necessarily killing them. The carnage hits its apex when Dolph and a partner walk into a room full of meditating ninjas and mow them down with Uzis. Freeze frame revealed that 17 were killed in about 6 seconds. Possibly an 80s Action record.

This is my favorite part of the Punisher, but isnt it always true of any film? At this moment the movie took on a surreal quality. I thought I was watching a Bunuel flick. The mafia bosses have agreed to meet the Yakuza bosses in an Italian restaurant. When the Yakuza arrive, everyone in the restaurant, including old ladies, waiters, busboys–not a single person who looks like a hit manall stand up and pull out pistols. Then they blow away the boss body guards. Then the bosses die from their poisoned drinks. For some reason, the Yakuza chick finds it necessary to point out to the dying mobsters that it isnt the wine thats poisoned, but the glasses! As if this is somehow more sinister. Then a different Yakuza chick takes off her earrings that also function as throwing stars and she uses them to crucify the Mafiosi who didnt drink his wine.

the Punisher has turned the tables on a Japanese torture doctor strapping him into his own hydraulic rack. Before asking the doctor for information he says, I dont want to stretch this out. After receiving the information, the Punisher leaves the room, then comes back into the room and turns the rack on.

Back to the jailhouse with Louis Gossett. After begging the Punisher to let him in, Gossett confronts the Punisher about his rampage asking, What do you call 125 murders in five years? the Punishers stoic reply, A work in progress.

Sort of. Gossett filled that role to a degree, serving as an advocate for law and order rather than vigilante justice. But since the Punisher was operating totally on his own, Gossett had no badge and gun taking, or demoting power.

The liberal justice system keeps letting the mobsters out, necessitating the Punisher. Nothing new. Theres also an interesting thing going on with attitudes toward the Japanese. We admire them because they have throwing stars and cool costumes, but hate them because theyre taking over our country and usurping our position of economic dominance (this is 80s Action, remember). The Yakuza move in to displace the New York mob, just as they were buying up golf courses and theme parks in California. Theyre efficient, ruthless and dedicated. Luckily, theyre also pretty small, so Dolph has an easy time killing them.

Pretty bad. I read a couple of other reviews and fan-boys were really pissed off because the film deviates from the comic book. For example, the Punisher doesnt wear that stupid fucking t-shirt with a skull on it. Not being a 35-year-old virgin, Im indifferent to such matters. But the movie was rather poorly made. For example, Gossett and his new partner go hunting for the Punisher in the sewers. The partner says something like, our odds of finding him are one in a million, but we might get lucky. Then the two embark on their search. A few minutes later and no Punisher. Thats it. The search is never mentioned again.

Nothing. I sat here for five minutes trying to think of something, but the whole movie is just a guy in black shooting people and occasionally getting naked.