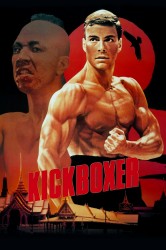 “Action has a new hero.” (That’s it? Nothing about “When life hands you lemons, run to the gym and rub more oil on your chest?”)

Before I get to the final battle — which itself is practically an infomercial for baby oil and bronzer — there is so much gay action that I barely know where to begin. First, Eric Sloan (Van Damme’s brother) looks like a porn star, and he’s way too affectionate towards Jean Claude, who first appears in a jean vest minus the shirt. Throughout, both are either clad in tight tank tops or, well, nothing at all, as I’m pretty sure I’m now an expert on every square inch of Van Damme’s chest. And when Jean Claude (we’ll call him J.C. from now on) first meets bad guy Tong Po, he’s absolutely transfixed by the Asian’s muscled legs. We then move to J.C.’s trip to a Bangkok strip club, where he seems utterly bored. After his brother is paralyzed in the ring, he finds an old man to whip him into shape for a revenge bout, which of course means that we get endless shots of “the training montage,” which involves more pecs, more thighs, and a ritual involving pulleys that resembles is a bizarre S&M routine. There’s more. Never before has a feature-length motion picture contained more grunting and groaning that wasn’t a porno. Make that slo-mo grunting and groaning. Finally, we’re treated to J.C. at a local hot spot, performing one of the most absurd dances ever filmed. Better yet, the hunky Belgian manages to punch a man out while doing the splits! And so J.C. and Po end up together; panting, heaving, embracing, and battering each other for countless rounds. So much blood, sweat, and pain. In all, a homoerotic tour-de-force.

Only three, and none in the ring! Very underwhelming, to say the least. It would have been four, but the dog that was stabbed survived.

A film so bad, it needed two directors! I’ve never given much credit to Van Damme, but did he routinely chew glass before line readings? He only really comes alive in the fight sequences, largely because he isn’t required to speak. And was the “Nooooooooo!” scene really necessary? Three times, no less? The soundtrack, as expected, was a cheese-filled horror show, featuring some ditty called “Fight for Love.” And another song featured the lyrics, “I don’t care what you think, I could kill you if you blink.” Excuse me? And for crying out loud, J.C.’s “love” interest is raped off-screen, which is surely the chickenshit way out. Then, to add a dash of credibility, J.C. chops down a tree…….with his foot! That may or may not be worse than Eric’s brutal submission of two toughs while firmly glued to his wheelchair. Still, it’s better than the sequel, which was bad, but also boring.

Once again, I’ve been let down. There was a post-paralysis roar to the heavens by Tong Po, however, which was followed by him ripping Eric’s championship belt in half. The best line overall? Kurt’s Thai girlfriend, who states quite matter-of-factly, “Tong Po very mean man!” And so he is.

During the Reagan era, Asia produced two kinds of movie characters — dehumanized, wise old sages who spoke like Charlie Chan and had the dime-store philosophy to match, and dehumanized savages bent on killing innocent young American boys. Here, we have both. To add to the anti-Asian bias, it is clear that white Americans fight with honor and self-respect, while the bastards from the Far East lie, cheat, play dirty, and receive their funding from gangsters. Apparently, the entire Kickboxer series was our small way of dealing with the Asian menace. They’d have their stock market crash soon enough, the bastards.

There was that dude whose crotch met with the sharp end of a grappling hook. Fine, that was cool.

First rule of Asian Strip Club: No scars, no bruises, no burns, no dancing.