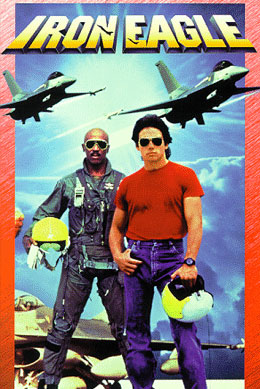 Entire Story in Fewer Words Than Are in This Sentence:

Let’s see…It’s the 1980s, fighter jets are involved, and young men wear sleeveless vests. Yes, homoeroticism is alive and well, thank you very much. The main character, Doug, is Tiger Beat made flesh — feathered hair, sunglasses, tight jeans, firm muscles, and ready to kick Commie ass. And in his spare time, he likes to race his airplane against a tough-talking fellow stud who rides a motorcycle. But the full scope of homoerotic behavior doesn’t hit until Louis Gossett, Jr. makes his appearance. Outside of being one of the most embarrassing actors ever to win an Oscar, Sweet Lou is also one fine hunk of sexual chocolate, talkin’ loud and never letting you forget he’s a man. Lou shakes his ass during a James Brown song, insists that Doug have a conversation with him while he takes a shower, and says the following things to a boy young enough to be his son:

“Get your butt in my trailer.” (He says this twice, in fact)
“Why don’t you see what my pillow and bed is doing.”
“If I could get in that cockpit with you, I’d show you touchy.”

I was stunned to learn that not one person would be killed in front of my eyes. Oh, plenty of planes are shot from the sky, towers and buildings blow up, and flames shoot from every direction, but I didn’t have the pleasure of watching anyone die. Still, I should have expected such things as this film wants to glorify war and military hardware and it would too messy to admit that actual human beings must stop breathing when men want to whip out their cocks and get to fighting. This is faceless, gung-ho warfare, the kind that the powers-that-be always prefer whenever they want to overthrow a democratically elected government somewhere on the globe. Let’s keep it abstract, boys. There are women and children watching.

For chrissakes, Twisted Sister and Dio actually appear on the soundtrack. And nevermind that the mission is initially planned in a juke joint. Or that its posturing and puffed up escapades make Top Gun look like Catch-22. Or that the only women we see are either crying, making mistakes, or not talking at all. This is a world where young boys put small, faded pictures of their girlfriends in a lonely corner while their rooms are overwhelmed by full color glossies of jets, rockets, and studs-in-arms. If the aim of Iron Eagle was to make military combat seem like a video game set to rock music, I can only say: mission accomplished. All of this outrage, however, ignores the central fact that a teenage boy manages to fly into hostile territory and save his father from some member of the Axis of Evil, all without getting so much as a scratch. You betcha.

Nothing post-, but there was a pre-mortem nugget, pulled kicking and screaming from the cliché bin: “So long, asshole.” But with homoeroticism afoot, it stands to reason that the lone putdown involves the anus.

A fucking shitload, my friend. We have trigger-happy Soviets, warfare as a romanticized rock video, conflicts between the military and civilians (need I state that this film sides with those desiring a military junta in Washington?), and the stated belief that negotiation is for limp-wristed cocksuckers who sleep with their mamas. And the military life is seen as the best possible career choice for our young people, given its opportunity for killin’ and such. And then there is this quote, uttered by a black kid no less, perhaps foreshadowing Clarence Thomas’ rise to the Supreme Court:

“(Iran) was different. Mr. Peanut was in charge. Now we got this guy in the Oval Office who don’t take shit from gimpy little countries.”

Thanks, now fetch me a lemonade, Uncle. But I’m still scratching my head over the bad guys — Arabs with Russian accents. I guess the filmmakers wanted to show that when it comes to evil, Commies and towelheads are one and the same. It’s our way of shaking our fist at those who put up the Berlin Wall and those who take hostages in the name of Allah. But when a film contains the only two black men in America who supported the Gipper, Marxist Saudis aren’t much of a stretch.

Alas, not one. But I did see a novelty survival, as Gossett managed to live after his plane struck the water at MACH 1.

Men with feathered hair are not to be fucked with.