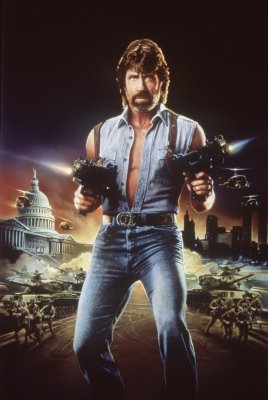 America wasn’t ready He was.

This prize goes not to Norris, but to the terrorist boss, Raskalov, who concludes a drug deal by punching the dealer’s girlfriend in the back of the head as she snorts coke with a steal straw, then taking the dealer’s gun and shooting him in the balls (ball shooting is Rascalov’s signature move), then throwing the screaming, bleeding girlfriend out a four story window. I’ve never seen a more brutal sequence.

How bad is it Really?

Baaaaad. The terrorists are Soviets, Cubans or drug dealers or something. Some are Chinese, some are American lowlifes who hang out in biker bars. It’s never even really clear. They’re just a shadowy amalgamation of right-wing fears. The scenes of American bliss that precede the terrorist attacks are unbelievably funny. White-bread families decorate their Christmas trees, attend church and visit Santa at the mall. The funniest part is that the wave of terrorism doesn’t deter anybody from these activities. In one scene the sheriff says that there have been twenty terrorist attacks that day in Miami and the TV news talks about the threat of marshal law. The next scene is of a Miami mall packed with carefree shoppers, who, much to their surprise, are attacked by terrorists. Also, Chuck Norris is the only actor I’ve seen outside of porn who can’t even walk convincingly. Finally, this film was not nearly gay enough.

Well into three figures. The opening scene is of the terrorists massacring at least thirty Cuban boat people with machine guns and it never slows down from there. Few films can rival Invasion USA in this department, just as it can rival few films in any other department.

“If you come back in here, I’m gonna hit you with so many rights, you’ll be asking for a left.”

Just the usual Reagan-style fear mongering and rhetoric. Drugs, commies, terrorists and rock music are coming to steal Christmas! The movie’s not really coherent enough to have a political message. Also, what’s with the lack of gayness?

Apart from being fascist, the Dept. of Homeland Security is grossly inefficient. You can defeat a far more organized and larger terrorist network than Al Quada with a pick up truck and an Uzi. Wait, better make that two Uzis.