FLIGHT OF THE INTRUDER 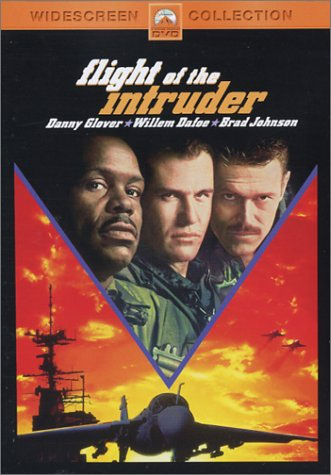 “The only thing they can count on is each other.”

Navy pilots deliver their loads in the rear.

Uh, you wanna check that tagline again? After that call-to-muscular-arms, it becomes obvious that as a story of the military’s gayest branch, this movie will rock the house! Willem Dafoe’s moustache hits all new recruits below the belt, and Jake (Brad Johnson) keeps the fires lit by obsessing over a dead pal for the entire movie. He’s so depressed, in fact, that he turns down an invitation to a brothel! Still, the centerpiece remains the Tailhook Bar sequence, where during a five minute romp, we are treated to arm wrestling, a huge mud pit that welcomes drunken sailors, tight uniforms, and enough cowboy hats to hold an impromptu flesh rodeo. Needless to say, a bar fight ensues, and men roll around the floor with each other, all the while insisting that they’re defending their “honor,” when in fact they’re one hard step from coitus. Dafoe adds to his moustache with a ridiculous scene wherein he massages his “pistol” while Jake stands by flirting shamelessly. And during the yawn-inducing climax, Jake and Camparelli (Danny Glover) grunt and groan together in a sweaty heap. And could someone explain to me why Dafoe yelled “The pickle’s hot!” no less than three times during the unsanctioned raid on Hanoi?

A film set in Vietnam where only 6 people meet their maker? Of course, countless Vietnamese died, but as they were killed by bombs (with the camera held firmly in the cockpit), they don’t really count. Given the intensity of the blasts, however, it can be safely assumed that hundreds perished. Take that, commie devils.

Outside of seeming to last longer than the war itself, this slab of right-wing nonsense was poorly acted (especially Danny Glover, who flirts with ham-fistedness most of the time), horribly paced, and contained some of the worst effects on the era. There’s a romance involving Rosanna Arquette that goes nowhere, which is as it should be given that Navy men hate the sight of women they can’t kill. One particularly bad scene had Dafoe and Johnson singing like choir boys after a deadly bombing run on Hanoi, which wasn’t helped by the uplifting score that soared like a righteous eagle. And why was Fred Thompson on hand for every single bad action movie of the past 20 years? Hillbillies of Tennessee, you have much to answer for by electing this turd to the Senate. But since the screenwriters didn’t bother with an ounce of humor (unintentional or otherwise), it’s a complete waste of time worth consigning to the scrap heap of would-be propaganda.

After dropping massive payloads on Nam, the pilots bellow, “If you’ve got the time, we’ve got the beer.” The best and the brightest indeed. Other than that, only bad dialogue that was not fortunate enough to follow death:

“You die, son, and I’ll piss on your grave.” — Camparelli

“Somewhere in my past, there was a wop in the woodpile.” — Camparelli, explaining why a black man has an Italian name

“Got room for a six-pack and a pizza?” — unknown soldier, right before vomiting in the backseat of a cab

“You know Jake, I think I could love an ugly woman.” — some crazy sailor, who should remain nameless

With John Milius at the helm, we can count on revisionism, fascism, and the unapologetic glorification of death, weaponry, and bloodlust. On all counts, Milius does not disappoint. Moreover, military hardware is fetishized to the point where one feels guilty for not maintaining a massive erection throughout. As expected, Washington bureaucrats and Jane Fonda are blamed for losing the war, and it is assumed that if renegade soldiers could have done what they pleased, Hanoi would have been eating apple pie and saluting Old Glory within six months. Jake’s plan to take an Intruder and bomb downtown Hanoi is seen as madness by the top brass — you know, the guys who “won’t let us win” — but by Milius and company, it’s a form of genius that would have freed the globe from Soviet tyranny and made it safe for Coca-Cola.

Nothing overly spectacular, except that Dafoe dies in full blackface. Really, the only novelty is that Milius didn’t linger even more over the charred corpses of inferior Asians. Perhaps he wanted us to forget that anyone other than white-bread American boys died for a noble cause.

Military protocol and the chain of command are for pussies.