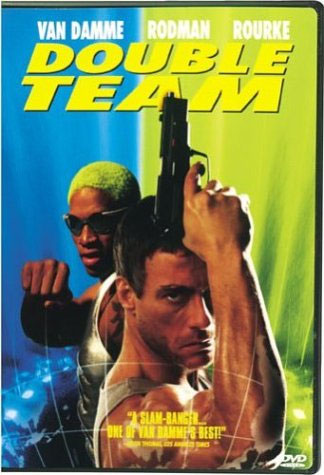 Ed Note: While this film was released in 1997, five years after the deadline for 80s Action, for fairly obvious reasons, it must be included in our Guide. Read and see.

They Don’t Play by the Rules.

Here are simple facts. This film stars two men who are strapping athletes. It is marketed toward men. It is entitled, Double Team. As though there were room for doubt, the tagline assures us that “they don’t play by the rules.” The alternative tagline is no less incriminating: “You’re either on their side…or in their way.”

We expect any JCVD film to be replete with oiled muscle and compromising positions and Double Team delivers. The stand out scene here is an instance of hand-to-hand combat near a hospital, which runs the gamut of sexual positions. First JCVD is behind his victim, then on top of him, then (honestly) they’re in the 69 position. You could make a print out of freeze frames from this “fight” that would look like your college roomate’s poster of the frogs running through the karma sutra.

Thirty-one. Impressive for a film starring a martial artist.

My vote must go to the man who is suffocated with a plastic bag. This method of killing is particularly novel because the combatants are 100 feet beneath the surface of the ocean, so the bag just meant that the guy suffocated instead of drowning. Unless the bag was full of water, which it certainly would have been.

Pretty fucking bad. I think the worst thing was the string of strained basketball analogies and puns that would accompany any appearance by Rodman. Even though Rodman’s character had nothing to do with basketball, some random, European gangster would say something like, “I’m gonna put you on the bench… for good!” Only not that funny. This theme culminates when Rodman’s character reveals his newest invention, an alternative to the parachute that is just a giant, silk basketball.

No. Just some English guy who was in charge of tracking down JCVD after he escapes from a secret island for spies who have gone soft.

Rodman, who is kind of like a more ass-kicking version of Q from the Bond flicks, boasts that a gun of his invention can “shoot the dick off a humming bird.”

None really, although the film begins with JCVD on a mission to retrieve stolen plutonium from Iraq.

Putting a bad actor next to an even worse actor doesn’t necessarily make either one look better. Except when they’re doing the splits.