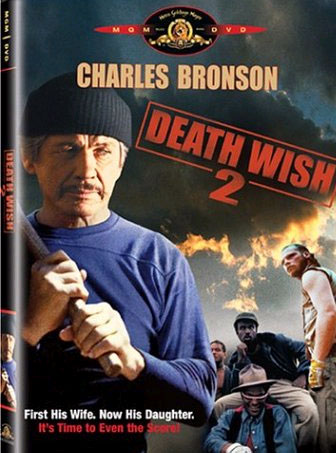 As far as I know, it didn’t have one. Perhaps “More of the Same” would have sufficed. [Ed Note: Found this on IMDB.com – “Bronson’s Loose Again In Death Wish II”]

It is rare indeed when a Bronson film contains overt homoerotic leanings, but his character in this film does seem much more concerned with firing his big gun than sleeping with Jill Ireland. Every time they are supposed to have dinner or go out on a date, Bronson is too busy filling scum with lead. Still, there are several scenes where Bronson is walking the streets in a fishing cap while leering at other men. True, he is sizing them up in order to kill them, but the glances could be construed as flirtatious, as if he were cruising 42nd Street.

Perhaps a dozen, including Bronson’s psychotic daughter, who jumps to her death after being raped by Laurence Fishburne. Bronson kills people on subways, in parks, in alleys, and in dark basements. The deaths aren’t as artful or plentiful as the third installment, but enough people die to satisfy any hard core Bronson fan.

How bad is it really:

Arguably the worst of the series, but worth a few laughs. The pacing is deadly, and the acting more wooden than expected. Jill Ireland’s character (as an anti-death penalty reporter) is unnecessary, although she does leave us guessing as to whether or not she too will die. Given that I don’t remember Bronson actually having sex with her in the course of the film, it stands to reason that she will live. As for the overall critical response, the only two I remember are Leonard Maltin (BOMB) and Roger Ebert (no stars). I can’t disagree, but I’d still defend it as a guilty pleasure.

Sorry, but Bronson simply refuses to comply with this category. He insists on speaking before he commits murder. The best? After glancing at the crucifix of a victim, Bronson states, “I see you believe in Jesus.” The whimpering victim replies, “Yes I do.” Bronson responds, deadpan, “Well, you’re gonna meet him.”

In many ways the least political of the series, although it is clear that the film believes it is justified to take revenge if you lose a loved one to violence. At any rate, Death Wish II gives us a society completely out of control because of drugs, hippies, and liberals. Only right-wing brutes with big guns can bring any control to what is a hopeless situation. Still, Bronson loses his girlfriend in the end (not to violence, but because she discovers that he has been killing creeps), so one could say that joyful murder is not always rewarded. Still, Bronson kills only minorities and bearded screwballs, so it’s obvious that all was well in Reagan’s America.

As I said, Bronson’s daughter crashes through a window after being gang-raped. The best part is when she falls on a spiked gate, causing blood to pour from her mouth. That was cool and all, but perhaps not as good as Bronson’s Mexican maid who is raped and beaten to death with a tire iron. And then there is Fishburne’s death where he stupidly puts a boom box in front of his face to block a bullet. Blood gurgles forth after Bronson guns him down and a tooth can be seen sliding down his chest. Or what about the previously mentioned “Jesus” guy? He is gunned down with a shot to the chest, but Bronson insists on plugging him yet again when he is down. Shot from a low angle, the dead man does a full sit-up.

If you insist on getting ice cream in the park, you will have your wallet stolen, which will in turn lead to your daughter’s suicide, your maid’s murder, and your girlfriend skipping town.