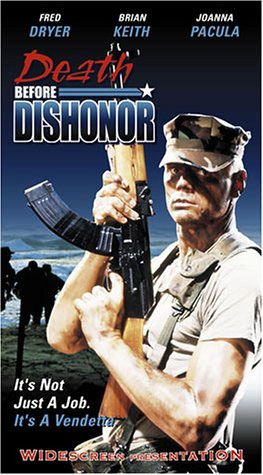 “They attacked his embassy, kidnapped his commanding officer and assassinated his men. Now, he must take foreign policy into his own hands.”

A grand total of 56 people are sent to Allah during the course of this film. Most are shot, but a few get stabbed and several more get blowed up real good.

In a turn few would expect, a mid-1980s action film starring Fred Dryer contains little credibility. Was he this bad on Hunter? Perhaps, but his acting here is among the worst I have ever seen from an 80s Action Guide leading man. More credibility is tossed out the window when an ancient Brian Keith throws at least three men half his age over his shoulder. And then there’s the sexy, leggy photographer who walks the streets of an Arab nation in Daisy Duke shorts while no one seems to care. Then, true to Ebert’s book of clichés, each and every car chase involves the overturning of at least one fruit cart. To wrap up the madness, during the final assault on a terrorist hideout, all of the Arabs are killed while only one Marine dies — and he bites it only because he insists on pushing Dryer out of the way of a grenade. In all, the film appears to have a decent budget, but it’s clearly on autopilot the entire way.

None, although I did hear what is perhaps the most common exchange in all of 80s Action:

As with any 80s Action film about terrorism, the issues are strictly avoided and the only images we see are smoldering embassies, hoodlums burning American flags, and incoherent mobs in the streets. Predictably, all ambassadors and diplomats are portrayed as weak, cross-dressing faggots who only know how to get in the way. One bureaucrat in particular (played by the recently deceased Paul Winfield), reminds Dryer that “We need to do this by the book.” Translation — Democrats are pussies, cowards, and traitors. With Reagan in the White House, the message of toughness and virility is never in doubt. And always at the top of one’s voice, thank you very much.

Dryer manages to blow up a truck with a rocket launcher while driving a jeep. Throughout, he never breaks a sweat. Also, a noble young Marine plants a drill in a filthy Arab’s chest. For that supreme sacrifice, he is cut in two by machine gun fire.

It is possible to fly your jeep through the air, land on top of another vehicle, flip at least six times, and walk away from the burning wreckage with only a slight limp. And whenever we first meet a tough-as-nails Marine, he is usually chomping on a big cigar.