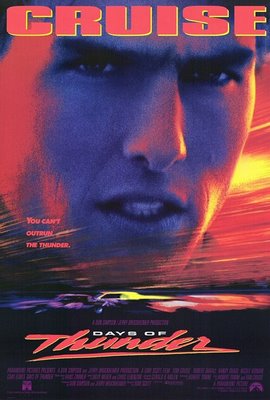 “You can’t stop the thunder!”

Jesus H. Christ in a Deep Fryer, Tom Cruise’s character is named Cole Trickle! Also, Tom Cruise! And old salt Robert Duvall plays a grown man named Harry Hogge! And second fiddle John C. Reilly is Buck Bretherton! I could stop right there and my case would be signed, sealed, and sent to the jury for about three seconds of deliberation. But since we’re dealing with director Tony Scott, there’s bound to be more for the well-oiled set. This is the sort of film where men exclude women from everything, including playful banter and impromptu wrestling matches at the racetrack. And when we’re dealing with a movie that turns rubber and steel into objects of lust, we know rim jobs are but a groan away. Duvall and Cruise bicker like an old married couple throughout, and it’s telling that the final image is of the two men running after each other while holding shit-eating grins. Nicole Kidman (pre-nose job) is aboard as Cruise’s love interest, but in their first bedroom scene, Cruise spends more time talking about the finer points of auto racing! And do I really need to speak at length about the hidden meanings of the race team’s final sponsor, Mello Yello, other than the fact that it’s clearly an underground nickname for the recipient of a Golden Shower?

Not one fucking cracker bites the dust, although Cole’s bitter rival Rowdy passes out and is forced to undergo a tricky operation. 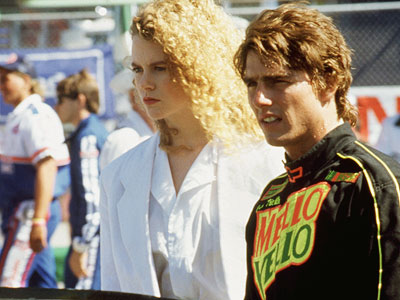 Inconceivably, Robert “China” Towne wrote this fucking script, proving only that the sell-out bastard has moved on to crayons and Big Chief Indian Tablets. We’re also treated to a car building sequence that is more erotic than Basic Instinct. And did Cole need to have buried “daddy issues?” Apparently he never got over the need to have the cock that gave him life inserted deeply into his bowels. Other clichés abound — just as money is about to run dry, Cole wins a big race and secures a sponsor; Cole wins Daytona after overcoming his fear of crashing at that fateful turn; and Duvall talks to his cars like children at Sunday school. At least the film didn’t resort to stock footage like Stroker Ace, but I’ve never seen the drama in hillbillies spinning around an oval while advertising spark plugs. But with that ghastly synthesizer music and hyper-stylized direction, at least we can prepare early for the splitting migraines.

As no one died, we’re simply left with bad dialogue. My favorite concerns Harry’s philosophy about life: “Rubbin’ son, is racin.'” I also liked used car dealer and financier Randy Quaid’s red-faced roar, “We looked like a monkey fuckin’ a football out there!” And leave it to Kidman to have the line most likely to be found in a daytime soap: “You’re selfish, you’re crazy, and you’re scared.” He’s all three, baby; that’s why he’s Cole Trickle.

As it’s now 1990, Reaganism has taken a backseat to Bush I’s yawn-inducing blandness. Still, there are enough Confederate flags and proud crackers to remind you that even then, the South had risen, won, and secured itself for the duration. Given the explosion of corporate logos, this is clearly a pro-business product, but this is auto racing, so it makes sense from a narrative standpoint. Still, racism abounds as we tour the South from Tennessee to Georgia and fail to see a single black person. I realize that NASCAR is a segregated sport for our pale brothers, but wouldn’t you think dark skin would turn up somewhere, even bound and gagged in Harry’s trunk? And yes, we are firmly in the macho decade, as women are treated like filth throughout. That said, I appreciated the female cop who ripped off her shirt to reveal some pretty nice melons.

Nothing. But Cole’s ability to survive the worst car accident ever caught on film is surely, shall we say, interesting.

The world of auto racing is even less interesting when fictionalized.