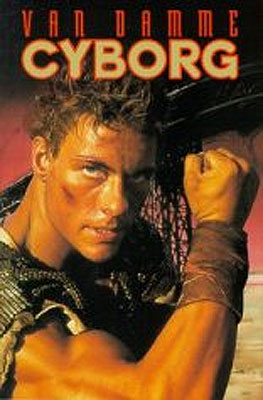 “He’s the First Hero of the 21st Century…And He’s Our Only Hope.”

Come the apocalypse, oil up and meet your maker. 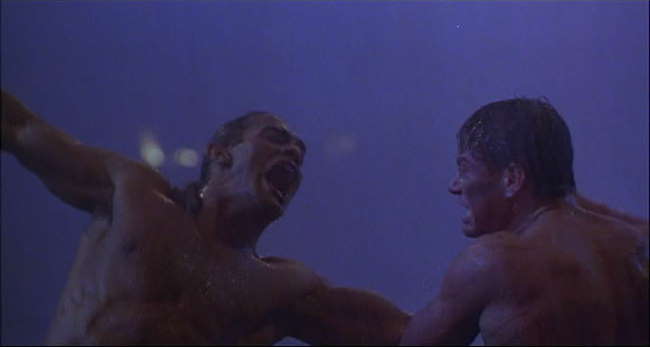 A fucking explosion, dear readers, which is but one reason why this film kicks finely-toned ass. When we first meet our hero Gibson Rickenbacker (Jean-Claude Van Damme), he’s dirty, sweaty, and staring at something in the distance. As the film grinds on, even more sweat accumulates and he’s covered with the usual assortment of oils, powders, and phony scars. Joining Van Damme in the gay parade are gang members who wear mink stoles, sleeveless vests, and more glaze than J.C. himself. The leader of the pack (named “Pirates” as if there might be any doubt) is a buff black dude who wears a simply fabulous shirt that’s a combination of aluminum foil and chain mail. And the scenes pile up quickly — the “industrial area” where the camera pans along men without shirts using hot pokers for who knows what; a ship sequence where the camera once again pans along a group of men, paying particularly close attention to their biceps, pecs, and abs; and the skinny-dipping scene where a perfectly attractive female walks naked into the water while Van Damme remains behind! He doesn’t even disrobe! And when this same chick takes out her tit while the two share a moment by the fire, he reaches over and covers it up!

But the best is indeed saved for last, where the final battle between Van Damme and the head Pirate is arguably the best fight scene ever filmed. There might be gayer 80s Action films as a whole, but these ten minutes may never be topped. First of all, it’s raining and our warriors are shirtless. Second, they scream and groan with a force not heard in nature. The two sound like they’re in a Frisco bathhouse, not some post-apocalyptic wasteland. They punch, kick, stab, smack, and bludgeon over and over and over again; I’ve never witnessed such madness before. And when J.C. finally moves in for the kill, he plunges his knife deeply into the Pirate, clutching him tightly while remaining a soft and gentle lover. The villain even comes back to life for a few moments; just long enough for Van Damme to slam him — ASS FIRST — on a grappling hook. And I didn’t even mention the five-minute flashback sequence where Van Damme — bloodied and shirtless — is literally crucified and left for dead! J.C. indeed.

A respectable 25 are killed, and most meet their end via the blade! I knew the film would be a treat when by the four-minute mark, I’d already seen some dude’s throat slit and the blood wiped on the sleeve of the guy standing next to the killer. 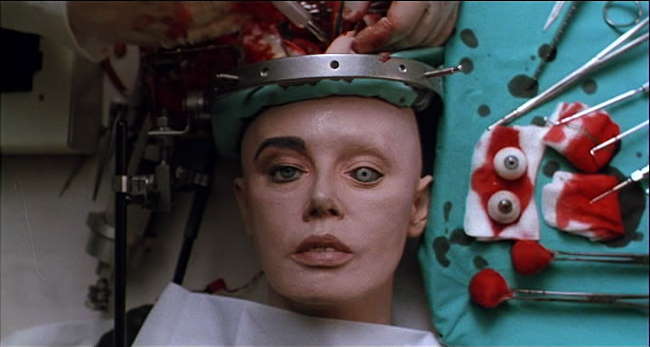 As hilarious as it is throughout, this remains one of the sloppiest films ever made. The acting is among the worst I’ve ever seen, and I’m including plays I saw in high school. Lines are delivered as if the actors would rather not be involved, and the villain overacts so wildly that I thought he might explode. In addition, the sets are cheap, the graphics lame even by late-80s standards, and with the bizarre sounds coming from faces that had been punched and kicked, it was clear that the foley artist was stinking drunk. The editing gets so bad that it becomes impossible to discern a flashback from the present action, and this might be the first film that isn’t Quest for Fire where the grunts exceed the number of actual words. And if the Pirates are so insistent on hiding out, why in the hell do they burst into deafening roars every five seconds? And how does a man retain the lungpower to growl like a grizzly bear after being kicked in the chest eight times? And was Van Damme instructed to stare a whole lot at nothing in particular?

Words are hard to come by in a film like this, but one exchange had me in stitches:

The only other line I understood took place as J.C. and the naked chick left the beach:

He: I didn’t make this world.
She: Yeah, you only live in it.

I know, I don’t get it either.

Fuck man, this is a Golan-Globus production! Cannon Films! Given that knowledge, the film could certainly be seen as a parable: a great plague (AIDS) wipes out the earth and its sinners (liberals) and all that’s left are muscled individuals and loners (entrepreneurs), who must put the world back together again (Reaganism). The strongest evidence for the anti-gay (yet homoerotic) agenda lies in a shot that lingered for at least 30 seconds. As the Pirates torture and kill a family, the camera moves to a wedding cake that is on fire. And the bride and groom atop the cake are melting! Yes, yes! An attack on the traditional family by perverts and godless homosexuals! It’s all so clear to me now. And why on earth is Atlanta the only so-called “civilized” city left on earth? Even as the world ends, the South runs the show.

First, a woman’s head is twisted off by the head Pirate. Then, due to his superior martial arts skills, Van Damme slices a man’s throat with a shoe blade! Finally, some guy catches fire and explodes for no reason whatsoever.

Civilization has truly collapsed when Manowar sets fashion trends. And it’s possible to have one’s head slammed repeatedly in a car door and not bleed.