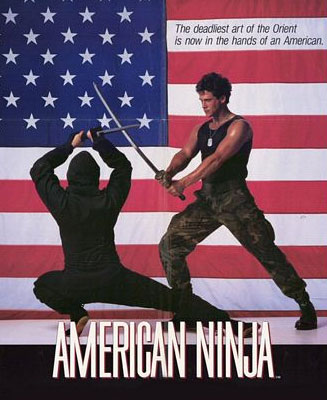 The Orient has created the world’s deadliest art. Now there’s an American master!

Mostly just the usual half naked men with great physiques and big guns. There is one very gay scene however. Dudikoff’s black, soon to be sidekick is pissed because Dudikoff for no reason.  All Dudikoff really did was unnecessarily start a fight against the bad ninjas, causing the deaths of several fellow soldiers. The two men slug it out and, after a nice tussle, all is forgiven. This familiar formula is the 80s Action version of make-up sex. After the encounter the two shake hands, then hold hands for about 30 seconds as they express fondness for one another.

I was beginning to doubt that there would be one, as I’m pretty sure that the script was originally written in a foreign language. Finally, Dudikoff’s black sidekick grabs an adversary by the balls and says, “How do you like that, little nuts?”

Also worth noting, this film contains the earliest recorded instance (1985) of a white man calling another man a bitch. In fact, I can’t even remember hearing black guys calling men bitches that long ago.

I’m pretty strict about this. Jonny seems to go the NFL route, counting anyone who’s knee touches the ground as a corpse. I have to be pretty sure they’re actually dead and in a martial arts film, especially one with such confusing editing, there’s a lot of grey area. Even by strict measure, American Ninja offers an impressive 93 onscreen deaths.

Under fire from ninjas, Dudikoff resourcefully retrieves the tire changing kit from a truck. He throws a screwdriver at one ninja, a tire iron at another and a crow bar at a third. This is particularly funny because the stunt men on the film must have been giant pussies. The crow bar and the tire iron actually hit the bad ninjas at such slow speeds that it’s impossible to imagine them hurting someone.

This film is very watchable. Time didn’t drag. But make no mistake; it is fucking horrible.  I could write about 100,000 words documenting the crapiness of this film. No one in this film, other than the Black Star Ninja, appears to have any martial arts training at all, which is bad because at least half the characters are supposed to be ninjas and ninjas are supposed to be good at martial arts. Oddly, the one guy who has strong kung fu, Black Star Ninja, doesn’t even need the training because he can just shoot bullets out of his hands. And flames. And lasers.  Maybe it’s a Picasso thing, like you have to master the fundamentals before you can go off the map.  I’m sure that’s exactly what the filmmakers were thinking.

Still, the Black Star Nina doesn’t even know how to use these weapons properly. When Dudikoff is climbing up a rope, Black Star uses the flames to burn the rope rather than just burning Dudikoff himself. Anyway, my favorite instance of un-ninja-like behavior by a ninja is at a ninja training camp. There’s a shot of a ninja walking across the top of some monkey bars. The deadly ninja is looking down at his feet, his arms held out for balance, taking one slow step every few seconds.

Another great moment, along the same lines as the tire iron, is the Simpsonesque death of a treacherous Sergeant. His car is run off the road, at perhaps 20 miles per an hour. He rolls for a few seconds, then holds his arms in front of his face and shouts “Nooooooooo!” Then a few seconds later his car, now traveling at perhaps 10 miles an hour, hits a tree and explodes on contact.

Also, in 2003 the whole ninja thing is just inherently funny. I found myself laughing at many uses of the word ‘ninja.’ “I will teach you ninja magic.” “Wait for the ninja!” After I finish this review, I’m going to see if I can find a cheap copy of this movie on half.com.

This seems to be loosely based on Iran Contra. An American officer is involved in an arms deal to finance his Latin American adventures, although they seem to be financed and approved by the government already. Really, any political content just kind of confused mess to serve as backdrop for all the ninjanity.