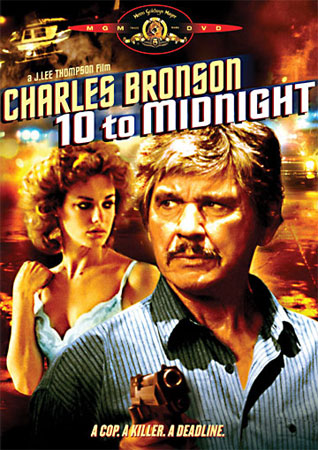 I could focus on the fact that the killer’s well-oiled butt cheeks are seen more than his face, but there’s more at work here than a generous slab of man candy. 80s Action-style Homoeroticism was motivated not by the overt display of the male form, but rather a deep, unshakable hatred of women. Misogyny, not pecs and abs, ruled the Reagan era. Of course, we needed to see the triumph of the phallus, but it’s more about putting women back in their place after a decade where they had the audacity to work outside the home, initiate sexual contact, and even (gasp!) run for public office. In this way, 80s Homoeroticism is the ultimate political statement; where women were either absent, dead, victimized, or so shrewish and unappealing that men would have nothing to do with them. That said, 10 to Midnight is not above showing a serial killer primping himself in front of the mirror, using not only a blow dryer, but assorted hair products that make him look pretty. The killer is driven to kill by a fear of women, and the fact that each and every one of them has rejected his pathetic, obnoxious advances. Despite what the film has to say on the left-wing justice system, it is secretly rooting for the character, as there is no other reason why the director has to linger over the dead bodies of the women (all attractive and big-titted) with such voyeuristic pleasure. Outside of that, the killer says to a woman at one point, “You give me a blowjob, I give it to you in the ass.” It escapes no one’s attention that he could just as easily be talking to a man.

Lacking. All told, eight souls are vanquished, including the killer himself. The six women who meet their ends are all stabbed. Alas, Bronson’s only kill occurs at the end, as he plugs the sicko in the head.

It’s the only film I can remember where the killer spends 90% of the film completely naked. That in itself was a novelty, but the best part occurred at the end, when he chases Bronson’s daughter down a public street with a butcher knife, while a helicopter circles above. There too, he’s quite nude. Overall, the acting is atrocious, although Bronson manages to steal the show as he dials it down a bit while the rest of the cast explodes with heavy emoting. And if a female character speaks, it’s only to plead for her life or scream in terror. Fine, that one blond lady seemed to squeal with orgasmic delight as some dude fucked her in a van, but her pleasure was quickly obscured by her dying gurgles, as we all know that for 80s women, sex is quickly followed by death. The filmmakers would have you think that they are sympathizing with the victims who have been screwed by a bleeding heart justice system, but its true colors show when it tries to have it both ways. I mean really, did we need a second shot of that black chick with the massive jugs sprawled out in the shower stall? They claim outrage, yet rub our noses in depravity, perversion, and bloodlust. And that’s about the only thing they did right.

Bronson has the last word of the whole film, uttering “No we won’t” as he shoots the scumbag dead (the killer is mocking the justice system by saying he’ll plead insanity, be set free, and that “the world will be hearing from me again soon”). And while it isn’t post-mortem, I liked the killer’s retort to a sassy chick: “I wouldn’t piss on the best part of you.” And when Bronson is asked how he knows a victim wasn’t raped, he utters, “Anybody who does something like this, his knife’s gotta be his penis.” He’s right, you know. And Charles Bronson said penis.

Have you read the tagline??? Let’s see, take director J. Lee Thompson, throw in producers Golan-Globus, and sprinkle a little dialogue about liberal judges coddling criminals, and you have a meal fit for an 80s Action King. And did I mention that it features Charles Bronson — with a gun? What the fuck else is he going to do with it but take revenge and clean up the mess the Warren Court hath wrought. As Bronson states, “I remember when legal meant law; now it’s some kind of loophole.” This comes after Bronson plants phony blood evidence so that he can get an easy conviction. The broadly portrayed defense attorney is, of course, walking scum, what with his three-piece suit, fancy haircut, and advice to “plead insanity” if the case starts to look bad. And we know that Chuck is heroic because he’s an anti-intellectual, mocking his “sensitive” partner for using big words and actually thinking before he acts. And amidst these criminals running wild in the streets (who are killing nurses, the ultimate symbol of female nurturing and care-giving), there is the simultaneous judgment of loose sexuality. The first woman killed had quite a past, and the film all but says she had it coming. And whenever a woman is in the middle of intercourse, she is dispatched like the tramp that she is. The only other sex act we witness is also interrupted, only not by a murderer, but Bronson’s partner, who is at the time wielding a gun. It’s no accident that Bronson always plays an asexual avenger; ridding the world of violent creeps, yes, but not really mourning the loss of sluts, hos, and bitches. Their deaths are merely a pretext.

I liked the naked chick who was stabbed to death in a forest by the naked man, which just might be a cinematic first. I also had a fondness for the inspired scene where a woman (who had just shown us her tits moments earlier during a gratuitous undressing scene) got knifed in the middle of cooking scrambled eggs.

Three very important lessons, my fellow Americans. First, nothing gives a liberal a bigger hard-on than setting serial killers free. Second, the Constitution is not half as important as keeping the streets safe for celibate vigilantes. And third, jerking off leads to murder. What’s more, Bronson proves it.