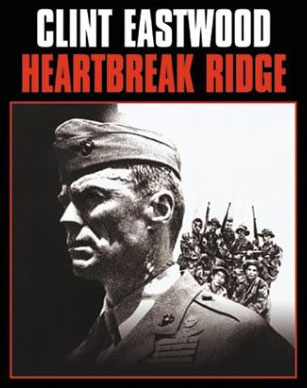 I couldn’t find one, so “The Marines: Fight. Kill. Chug Cock” it is.

Godless Marxism is no match for well-oiled beefcake.

Within five minutes of the opening credits, butt-fucking is mentioned. That immortal conversation helps begin one of the most homoerotic films of the 1980s, and certainly the biggest gay-fest in Clint Eastwood’s long career. Sample dialogue from Clint: “I have had my differences with some wet dicks.” More sample dialogue from Clint: “Strip off those t-shirts!” Twice! Clint is also caught reading women’s magazines on at least two occasions, and pages of dialogue fly by with numerous references to tight assholes, covering other people in shit, sex with animals, and ingesting bodily fluids [Ed Note: Apparently, Matt Cale has adoptedRick Santorum’s definition of homosexuality]. Clint also threatens a tall blond man that he will bend him over a table and “plug him in the keister.” We are also treated to dozens of young studs with tight shorts and sweaty chests. Clint even mentions taking “warm showers” with his men at least five times. But the biggest homo romp occurs late in the film when around two-dozen Marines wrestle shirtless in a mud pit. It’s the gayest scene since Top Gun’s volleyball match.

Perhaps as many as a dozen, although I blinked a few times and missed a couple.

Other than being the 10,000th version of the “hard-ass who tames a rag-tag group of misfits” theme, it’s not half bad. Actually, it is. Nearly all of the dialogue is macho bullshit, and consists of one-liners that begin with, “He’s so full of shrapnel”…….”I’m so broke”……..and “You’re so ugly”……… And Mario Van Peebles appears as comic relief, which of course means that he’s black. And for once, Clint’s tough guy persona seems forced, which might account for the light comic tone that was a distraction from the action. More than that, though, the subplot involving Clint’s ex-wife is clichéd and dull, using every standard device –hate, love, hate, affection, a fight, then a hint of possible sex –for a film this brainless. And shit, it takes forever to reach Grenada (the 99 minute mark by my counter!), which is really the only reason I rented this fiasco. Then again, as the actual “war” was just a little over ten minutes long, I guess it’s okay. And did we really need the scene where a soldier calls for air support and is told by the operator that collect calls are not accepted and a credit card is required?

No post-mortems, but quite a few silly lines to keep the folks happy. Some hunk, while charging Clint with a knife, cries: “Maybe I’ll carve me some faggot wings.” An officer says a Cuban cigar is “as smooth as a prom queen’s thighs.” And the following exchange between Clint and Mario occurs early in the film, even before they know each other as lovers soldiers:

Mario: What’s white and twelve inches? Nothing.
Clint: I’ll tell you what’s black and bleeding if it don’t shut its face.

Let’s dispense with the trivial shit first. The weakest pussy on the base works behind a desk and wears glasses. Translation? The only route to manhood is through the barrel of a gun. Based on conversations between Clint and his ex-wife, it is clear that the men do the fightin’, while the women stay home and worry. Now for the good stuff. Grenada? Grenada? Conveniently, no mention is made of the fact that the invasion was merely a distraction from Reagan zipping up his cock and pulling the troops out of Beirut after losing 251 Marines to a terrorist attack. Far from liberation, the “war” was no more than a fun-filled vacation for a few Marines who simply had to rescue a few tourists who got too much sun. And a scene where medical students are busted out of a locked lab is treated like the liberation of Paris for fuck’s sake. And when Clint comes across a dead enemy soldier who has a Cuban cigar in his pocket? Ahhhhhh, it’s Castro my friends! Up to his old tricks, no doubt. The final scene where the Marines return home from an hour well spent is treated like V-E Day, complete with bands, flag-waving, and cheering crowds. “Fifteen medical students saved, sir! Six classrooms liberated, sir! Several dozen acres of beach secured for sunbathing, sir!” We get everything but The Gipper himself descending from the clouds. And are remote Caribbean islands really known for their medical training?

Someone died in Grenada? Pshaw!

You can pull out your cock, beat your chest, and fill the air with your war cries, but Grenada will never be Normandy. Or even Panama.