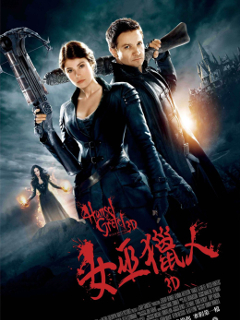 There is a word in the English language that is quite powerful. It has been nearly forgotten in this Corporate Age, as it sounds the death knell for any job interview or PowerPoint presentation when it appears in the answer to a superior’s question. But it is time for us to embrace this word once again. It is time for us to take it back.

You don’t have to accept every script that lands on your agent’s desk. You don’t have to sign on to every movie that offers you a paycheck. I know you’ve gotta eat, but there are limits. There is something called your dignity. Isn’t that worth a little more than money?

I know what you’re going to say: Who am I to lecture anyone about dignity? Didn’t I once spend three weeks sleeping in a 1990 Geo Prizm? Fair enough, I guess. I mean, whatever. Whatever!

But Jesus Christ, Jeremy. You’ve been in Mission Impossible: Ghost Protocol, The Bourne Legacy, and you were/are Hawkeye in the MCU. Most actors sign on to one major franchise at most; you’ve signed on to three. I’ll give you the MCU and maybe Bourne, but Mission Impossible? I watched Ghost Protocol solely because of Brad Bird’s involvement, and it was easily the best of the sequels, but that isn’t saying much. Then we have all of the other movies you’ve appeared in since your star-making turn in The Hurt Locker. There’s something to be said for striking while the iron’s hot, but it’s been over 4 years now. I think you can slow down a bit and be a little more selective.

The Town was pretty good, though. More of that, Jeremy. Less of everything else.

I guess I have enough awareness to realize that Mr. Renner may have, in fact, turned down some scripts. But this just raises the question: how terrible were those movies? How bad does a movie have to be so that Jeremy Renner doesn’t want to appear in it?

Then we have Gemma Arterton, who first arrived in the mainstream consciousness with her role as Strawberry Fields in Quantum of Solace. After that, she was in the Clash of the Titans remake. Well, I think she was. I can barely remember that movie. All I know is that the treatment the mechanical owl received was a disgrace. Anyway, she then appeared in Prince of Persia: The Sands of Time, which failed to top Mortal Kombat as the greatest video game adaptation of all time. Then she was in… some other stuff, I guess. Why haven’t you gotten more roles, Gemma? Are you not sleeping with the right people? Hollywood is just a clusterfuck nowadays.

These two titans of The Blockbusters of Lesser Renown have teamed up in Hansel and Gretel: Witch Hunters. From its title, we can sense that it is ripping off Abraham Lincoln: Vampire Hunter. From its content, we can sense that it is ripping off Snow White and the Huntsman. On top of that, it features the automatic crossbows from Van Helsing. It has taken nearly a decade, but someone has ripped off Van Helsing. This is a pivotal moment in cinematic history. We truly are feeding off the bottom at this point. Hollywood is eating itself.

In this movie’s defense, I will say that at least it feels like a single, complete idea. The opening credits state that it was written and directed by somebody you’ve never heard of. But it definitely feels like the idea of one person translated fairly effectively to the screen. It is a nice contrast to all of the script-by-committee blockbusters of the last 15 years or so. Hansel and Gretel: Witch Hunters is really more middle-of-the-road than outright terrible. It’s not Transformers: Revenge of the Fallen or anything. I mean, I actually laughed at Gretel’s line when the messenger explodes into a bloody mess at the tavern. Well, it was more of a titter, but I’ll take what I can get at this point.

The movie opens with Hansel and Gretel’s father abandoning them in the forest and moving back to Texas. They walk to a nearby house made of candy and are captured by the evil witch that lives there. When all seems lost, they overcome the witch, throw her into the fire, and are consumed by the opening credits. We are told the tale of how Hansel and Gretel started hunting down witches over the years and became famous for their deeds. I think this is why the movie is called Hansel and Gretel: Witch Hunters, but I’m not sure. This movie is quite subtle with its themes.

Now it’s “many years later”, and Hansel and Gretel have come to some podunk town to help with the witch problem. We’ve got a Stupid Chief in the form of the local sheriff, who hates the witch hunters because they’re not from ’round there. We have an annoying teenage groupie, filling the always necessary “Shia LaBeouf in Constantine” role. We have a love interest for Hansel, who turns out to be a good witch like his mother (spoiler). We also have a ridiculous looking troll that saves Gretel from being raped by the Sheriff in one of the most bizarre scenes in a mainstream movie in some time.

Why do we have to have a scene where the female protagonist is threatened with gang rape? Is it really necessary? You’re not making Planet Terror here. It’s not a throwback to exploitation film. Why is it in this movie? Is it a commentary on the patriarchy of some kind? At least Tarantino had the good sense to make his appearance as Rapist #1 funny by having his genitalia melt off as he walked towards his intended victims. I guess this was supposed to be a moment for all of us to check our privilege or something. But why is the scene intercut with Hansel and his gal pal swimming in a pond? What the fuck is going on?

(Note: According to the Internet, the rape threats were added back in to the unrated cut, and did not exist in the theatrical cut. This raises the question: Am I going to excise my complaints from this review? Holy shit, this movie had a theatrical release?)

Anyway, the villain of the picture is Famke Janssen as the leader of the evil witches. Along with her two henchmen henchwomen, she plans to use a dozen children, Gretel’s heart, and a blood moon to make herself immortal, or immune to fire, or whatever. I don’t know. I don’t think this movie is scientifically accurate.

Hansel and Gretel have automatic crossbows, some kind of three-barreled revolving flintlock guns, a gatling gun that fires crossbow bolts, a shotgun that fires crossbow bolts, a gun that fires a Wanted-style multistage bullet that explodes like a claymore mine, and all other kinds of craziness. In spite of this, they still get their asses kicked repeatedly because it’s in the script. Is it a commentary on the futility of exercising one’s own agency in a patriarchal world?

Oh, I almost forgot! There’s also a great scene where Gretel uses a hand-wound magical defibrillator to revive Edward, her troll guardian/friend. I can’t even voice a meaningful protest to this scene. I just don’t know what to say. I mean, at least Snow White and the Huntsman had Charlize Theron’s ass in it.

Apparently, the witches’ spells don’t work on Hansel and Gretel because, as revealed later in the film, their mother was the most powerful White Witch of all time. But then, the witches’ spells actually do work on Hansel and Gretel sometimes. It’s like, if the spell didn’t not work, then it worked. But if it didn’t work, then it didn’t work. I think I just confused myself. Oh, dear. Well, magic is fluid like that. It’s so powerful that it escapes from the movie and affects the writer of the script.

We’ve got 300-style speed ramping, complete with motion trails in a few instances. We have a brief moment where Hansel dodges a crossbow bolt in bullet-time slow-motion like Neo in The Matrix. We have the usual wire-fu flipping about, the broomstick flights from Harry Potter, the invincible heroes from every action movie of the last decade or so, and God knows what else. It’s a smorgasbord of ripoffs and callbacks.

In one scene, the annoying teenage sidekick attempts to cop a feel on Gretel’s right breast. It was a riveting moment that kept me on the edge of my seat.

There’s also a lot of profanity in this film. It’s not used in the way that adults use it, though. It’s used in the way that 14 year olds who are trying to be edgy use it. Many witches are called “bitches” throughout the film, and “fuck” is sprinkled about as well. It’s just yawn-inducing nonsense to anyone who has ever paid for their own car insurance. I’m getting too old for this shit!

If you happen to actually watch this movie, prepare yourself for the final insult. No, it’s not the final line: “I hate to break it to you, but it’s not going to be an open casket.” It’s the fact that according to the Internet, this movie made $225 million worldwide against a reported $50 million budget. As a result, a sequel is in development. I repeat: A sequel to Hansel and Gretel: Witch Hunters is in development. We truly are in the New Age of Enlightenment and Spiritual Awakening the Mayans predicted. God help us all.

This is a movie tailor-made for 14 year old retards who think that everything the adult world stopped laughing at years ago is the height of comedy. Really, Hansel and Gretel: Witch Hunters is Picard Facepalm Image Macro: The Movie. I should just stop now, post that image, and be done with it.

Actually, I think I will. Here we go: 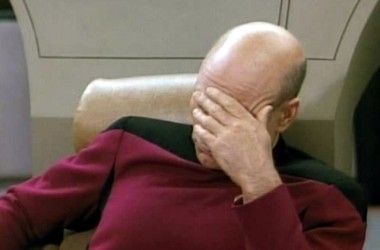 And we all lived happily ever after.