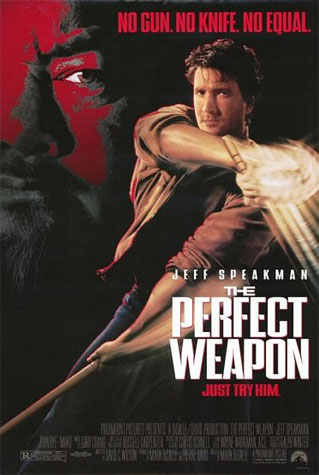 No gun. No knife. No equal.

No shooting. No killing. No scrotum.

Fucking two! And that’s being generous. At one point, Speakman throws a knife at a gunman, making sure to hit him in the shoulder. In spite of our “action hero’s” best attempt to be gentle, the gunman falls really far and perhaps dies…

The idea here is that Speakman is too noble to kill his enemies. He believes that crossing over into vigilantism will make him just as criminal as they are. What a fag. After a vicious, Korean gangster kills Speakman’s friend, then attempts to use the death to manipulate Speakman into killing an innocent man, Speakman gets his hands on the bad guy and… spares his life! Then the bad guy pulls out a knife and attempts to stab Speakman in the back after which Speakman… spares his life again! And turns him over to the police! We all know what will happen after the police get him. Some Jew lawyer will convince a liberal judge to give the guy 6 months probation and he’ll be back on the streets.

There should be a Steven Seagal movie in which Seagal kills all off of the scum Speakman lets go in The Perfect Weapon. Actually, new footage could be spliced into The Perfect Weapon. Speakman applies a gentle sleeper hold, while softly humming a lullaby. The gangster wakes up tucked snugly into a sleeping bag and finds a mint, along with an apology letter from Speakman, explaining that he only had to assault the thug in order to bring his boss to justice, and it was nothing personal, and he hopes that no one was hurt. Then Seagal swoops in, says, “you ever hear of good cop bad cop? Well you’ve got one guess which one that swish was and which one I am” and pulls the dude’s spine out through his mouth. And then throws his own mint on top of the corpse.

Some have asserted that the extremes of political rightism and leftism blur the distinction between the two. Specifically, can a rigidly hierarchical, authoritarian system like the USSR be considered leftist? Something similar is going on here. Given that Speakman is a giant pussy with no penis, testicles or scrotum, would fucking him make you gay? Answer: yes. As Speakman chose to cast a 14-year-old Asian boy as his side kick in this film, he must be characterized as homosexual, even though he cannot be considered a man. If you saw the drug dealer in Boogie Nights and his little firework boy and thought, “these two should star in an action film!” open up for The Perfect Weapon.

There is one clear death, and it is a novelty. Speakman fights the bad guys invincible bodyguard (the awesome Professor Toru Tanaka) for 15 minutes before–I can only assume accidentally–igniting a gas leak that burns the bodyguard, then blows him up. Not bad.

Nothing really. Just that human life is sacred or something lame like that. Oh, also the aforementioned idea that justice is best carried out in the legal system. Pshhhhh.

Speakman puts an arm-lock on some guy in order to extract information (unlike the mighty Seagal, Speakman never snaps limbs, just twists them.) After he finds out what he wants to know, Speakman says, “who said it never hurts to ask?”

Also, some mob employees are loading shit on docks, when Speakman approaches them with his karate sticks and says, “It’s break time boys.” The double entendre surely passed over many dittoheads. Imagine the one-liners Speakman could come up with if he ever actually killed someone!

Well, the story and story telling are good for the genre. And in fairness, Speakman’s martial arts displays are fun to watch. He can really pound on dudes with those big sticks of his. The result is as frustrating as soft-core porn. We see a hot piece of beefcake… er ass. Piece of ass. She’s ready, she’s moaning and… horribly fake, simulated sex that reduces your penis to something that should be served atop a cone at Dairy Queen. Similarly Speakman furiously pounds his enemies and just when it’s time to crush their windpipes, he decides he’d rather shop for new drapes.

What Did You Learn?

Reading a review from the IMDB board entitled “Electric,” I learned that there exists a human being who earnestly feels that this film warrants comparison to “The Odyssey.”

Jeff Speakman’s performance in “The Perfect Weapon” is awesome. This plot is able to magnificently interweave furious action sequences with the literary theme of the return home. While the plot differs markedly from that of “The Odyssey” by the epic bard Homer, there is still one vital thread that can be explored: both heroes return home after a long exile to kick ass and reclaim their positions in society. The ensuing list of possible contrasts and comparisons is exhausting if not infinite. However, if one is to understand one point, it is that in both works, martial arts are employed to signify the process of social transition; the re-integration of the hero into society.

To be a little less formal, let use the martial arts aspect as a segue into a nifty little observation. Jeff Speakman is a reasonably well known proponent of Ed Parker’s Kenpo Karate, developed in U.S. during the 1940s and 1950s. “The Perfect Weapon” is an excellent primer on the power and wisdom of this art. The clearest example of this exposition is at Master Lo’s Kenpo school, where Speakman learns both the skills and valuable lesson he will keep with him for the rest of his life; the most important being the difference between the tiger and the dragon. Yet, the movie is set in Koreatown, where Tae Kwon Do is the martial art du jour. The korean flags are prominent in the gym scene, and the references to Korean culture abound. There appears then, to be a subtle not so subtle match up between Kenpo Karate and Tae Kwon Do. The climax of this tension comes as Speakman confronts Leo Lee (Bandana) in the gym, looking for a guy who is ‘good in Tae Kwon Do.’ Does the ensuing three on one fight symbolize the clash of fighting styles? No one will ever know what Ed Parker or Mark DiSalle wanted to achieve here, but the contrast is too present to be simply a coincidence.

Alas, all reviews must end somewhere, and though I have much more to say, I will end my two cents with a small criticism of the action in the film. Anyone with a decent amount of martial arts experience will note that in the final warehouse scene, the knife attacks are undoubtedly more akin to training exercises than to real street techniques, but then again that may have been purposely done. It is also worth noting that this author has minimal training in Kajukenbo (an art based on Kenpo) and is far from an expert in the field.

The one thing that I can say with reasonable auctoritas is that this movie is electric from start to finish.