Home / Reviews / Movies / The Passion of the Christ – Review

The Passion of the Christ – Review Forget for a moment that The Passion of the Christ is inherently anti-Semetic. Forget that it is exceedingly violent, pushing the envelope of its R-rating at every turn. Also forget that director Mel Gibson is a bit nutty and arguably as wacked as his hateful father. Those things are true, mind you, but put them aside while I tell you the major and unavoidable problem with this film as a film. To be frank, The Passion of the Christ is a monotonous bore; a repetitive gore fest with little more than a savage beating at its core, bookended by a dull, Sunday-school friendly introduction and laughable (and outrageous) finale of resurrection. Jesus is whipped, flayed, bloodied, taunted, then whipped again, only to be pierced, hammered, punched, kicked, and, for good measure, whipped again. There is literally nothing else. I understand that Gibson has chosen to focus on the “passion” end of things rather than a conventional Bible lesson or bio-pic, but that doesn’t make the two hours any more endurable. Simply put, I was bored. Fine, as a non-believer and one who believes the whole of the Bible to be fiction, I was not exactly receptive to its central message of suffering and absolution, but I am entitled to evaluate this work as a cinematic exercise, and as such it failed on all counts. Yes, the music and the imagery are professionally realized, but they serve only to manipulate. It is art in the service of empire — Christian empire to be exact. And you know damn well I’m going to reject such a message in its entirety.

But again, an atheist can embrace a religious film if, and only if, it fulfills the promise of cinema. There are plenty of films that are made by directors I might not admire, or films that reinforce a political perspective that offends my sensibilities, but I believe in adhering to Roger Ebert’s dictum — “It’s not what a film is about, but how it is about it.” I accept those words and, of course, will apply them to Gibson’s movie. Therefore, I reject his film because it is one-note, contains no subtlety or subtext, and is little more than a work of the most vile propaganda; a bludgeoning work of emotional rape, devoid of intellect or reason, that is as simplistic and cartoonish as it is monstrous. “But it’s taken from the Gospels,” people cry, as if that doesn’t make my argument for me. Fine, I’d answer, which is why the Gospels are as full of shit as Gibson’s interpretation of them. It is his film, yes, but does he not have a responsibility to at least explain the players involved and what is going on? From what we are given, a man who spoke a little bit about love and peace was betrayed, given a show trial, pushed into execution by some sadistic Jews, and then tortured like no human being I have ever seen.

And what about “the Jews?” Whatever one might say, Jews are even more one-note than the rest of the cast, shown in their garish robes and huffing and puffing with a sniveling rage. Gibson can deny his hatred of Jews all he wants, but I must believe that the violence was shown to be this extreme so that he could make connections (for his audience as well as himself) between the actions of the Jews and the resulting execution of the Savior. Gibson is saying, “See what these people did to him?” He might argue in various interviews that all of mankind killed Jesus, but that is quite simply a lie. He wants all of us to remember that the killers had faces and names and more importantly, religious beliefs that, to this day, are in direct opposition to his own. 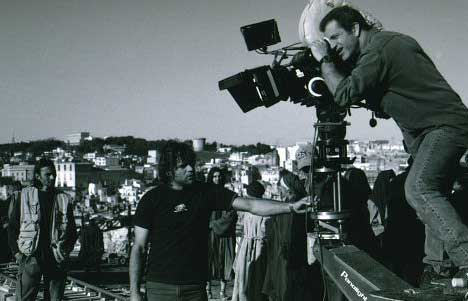 And while anti-Semetism is important given its continued prevalence in the world, I must continue to argue against this film for other reasons, lest I be accused of being as political in my assessment as the filmmakers are in their construction. Propaganda, of course, avoids nuance and strikes immediately for a visceral response, but there should be, at some point at least, an attempt to appeal to something tangible, as in “this is what I want you to do next.” A vile masterpiece like Triumph of the Will, for example, made it crystal clear that individuality was bad, group-think the only means of survival and happiness, and young, sweaty boys were best seen in assorted wrestling holds. The Passion of the Christ demonstrates that some dude named Jesus went through a horrific few hours before his death, but to what end? The Christians in the audience already believe that Christ died for their sins, but what about everyone else? Does watching a man get pummeled over and over and over again really have any impact except disgust? And even that might not register as I’m not exactly the man to seek out if you want a little empathy. Shit yeah, it would hurt to have nails pounded into my hands and feet, but I still ask you — so what? Sorry to get all cinematic on you Mr. Gibson, but I need a story, motivations, plot; something to get me to the end of the film.

Before I get to the highlight of the evening, let me ask one question that needs to be asked, but frankly, never made any sense to me. If God willed that Jesus would die for the sins of mankind and such a death was preordained, then why is Christ’s death considered a self-sacrifice? Doesn’t the very idea of martyrdom imply choice? Moreover, if God sent Jesus to die, then why are we debating the identity of his “killers?” In the end, didn’t God himself kill his own son? Isn’t that the hand of God brandishing the whip or pounding the nails into flesh and bone? As a man who would rather read the nutritional content on a box of cereal than the Bible, I really don’t give a shit, but I’d like to hear someone who does believe address this simple point. For me, it would seem that if God willed his son to die for humanity, then the idea is reinforced yet again that if anything, God is a sadistic, murderous bully who achieves a cosmic erection at the sight of blood and pain. But hey, He’s your deity; I’m comforted by the fact that I’ll rot away at death and that will be that.

Now for the good part. As soon as the closing credits began, a young man stood on his seat and began to shout about God, Jesus, and the sacrifice he made for mankind. Given the audience, most stayed (including my wife and I, lovers of the bizarre as we surely are) and shouted their amens, joined him in prayer, and embraced the man in a collective affirmation. It was the closest I’ll ever get to an old-fashioned tent revival. But his words were curious for one reason: given that most people who see this film already accept Christ as their savior, why would anyone stand up and ask that audience members come to Jesus? This guy would be far better served by a visit to the teen comedy next door, would he not? It would be like me sneaking into an ACLU meeting and shouting endlessly about the need to protect free speech. “Yes, yes, we know. Now shut the fuck up.” This little sideshow merely proves that Christians — at least the all-American, muscular variety — cannot help but yelp and flail their arms at every opportunity. And what a time to be discussing Christ’s love, after all, than immediately following two hours of open wounds, cruelty, and the hateful infliction of torture. What bothers me most is that the deafening roar of sniffles and sobs would have been reduced to pin-drop silence had the figure on screen been anyone but Jesus. The same folks who cried about Christ’s pain are the first ones to line up in support of the death penalty or a war that kills thousands because some monkey in the White House says it’s the right, Christian thing to do. Hey, I’m never sympathetic, but at least I’m consistent.