A Ghoulies Review in 10 Facts

1) Mariska Hargitay is in it.

Long before she became America’s favorite party pooper on Law & Order SVU, Mariska Hargitay was a Hot 80’s Chick. In Ghoulies, she plays a friend of the protagonist whom he lures into unwittingly participating in a Satanic ritual. Later, Mariska is getting frisky with a guy and drops her bracelet in a fountain and, when he tries to retrieve it, they are slain by the green slime Ghoulies who live in the fountain.  These are the kinds of things you have to deal with when you live in LA. Also, now that we have the proper perspective on the subject, I’ve determined that 80’s style makeup and hair, for all their garishness, can be quite attractive.

2) The Goulies are not in it that much.

I suppose this is true of a lot of such movies, like Jaws. But you’re not really sitting there dreading The Ghoulies as they loom offscreen. You paid to see Ghoulies frolicking in toilets and creating mayhem. It’s not a total let down, as they commit a narrow majority of the murders. However, this is mostly a movie about the protagonist, Jonathan Graves, getting swept up in black magic. He inherits an old house from his sorcerer father, from whom he is estranged owing to the fact that he tried to sacrifice an infant Jonathan to Satan and steal his life force. Kind of like how the Archie Manning used a Satanic spell to turn one son retarded so that the others could be better at football.

Jonathan finds a bunch of devil worshiping paraphernalia in the house and, as almost anyone would, immediately begins summoning demons. That’s what the Ghoulies are, more or less. They hang around. They bite some people. Unlike Gremlins, they are unambiguously ugly and vile. But the Ghoulies are only the third most important thing Jonathan summons, ranking behind his Warlock Dad and… 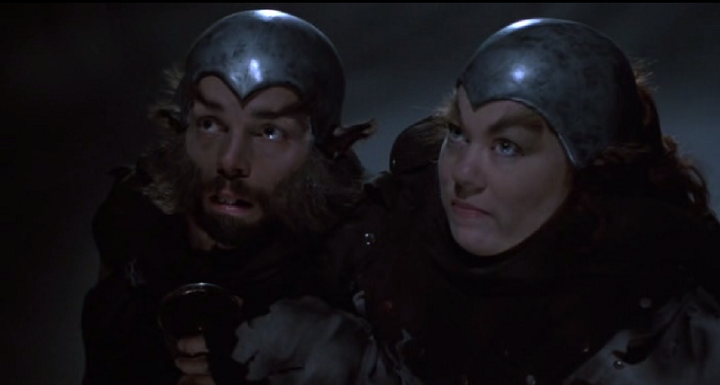 During his summoning spree, Jonathan conjures up Grizel and Greedigut. I am pretty sure they don’t count as Ghoulies, but they were my favorite characters because I never had any fucking clue what was going on with them. Total wildcards. They are elves dressed in medieval armor who are alternately all knowing advisers on the nefarious, existing beyond time and space and gruesome slapstick comedians. Grizel seems to have some trace of a conscience, though when he is watching someone being mutilated, it is hard to tell if his gesticulations were supposed to convey horror or delight. Greedigut is just a total cunt. They are great.

4) Ghoulies is in compliance with 80’s Movie Law.

80’s movie law dictates that during the course of the film, at least one character must partially remove his sun glasses to express incredulity in a cool manner. The character of Mike also fulfills the requirement for a stoner buddy who wears dark colors but is upbeat and jokes around a lot and never gets laid.

5) The iconic toilet shot was not originally in the movie.

Someone thought it up as a marketing ploy and when it took off, they shot the Ghoulie coming out of the toilet and inserted it into the movie. I wonder if the movie would have even more popular if Ghoulies lived in and attacked from toilets exclusively. It would make for some great”don’t go in there!” moments. If they had remade the whole movie and called it The Toilet Monsters, I think it would have an even greater cult status.

6) It rips off the story of Star Wars.

Jonathan is raised by a decrepit old caretaker named Wolfgang who turns out to be a sage with magical abilities. Though it’s not a big revelation, the powerful, evil sorcerer who comes back from the dead is Jonathan’s father. The actor who plays him is a glorious ham who sounds like Harvey Fierstein. Jonathan is able to escape his father’s attack when Wolfgang engages him in mortal combat, presumably sacrificing his own life.

7) It has a pretty great novelty death.

Fresh off getting laid, Jonathan’s Sheen-ish pal goes to the kitchen for a snack. The resurrected corpse of Jonathan’s Warlock Dad transforms into a beautiful woman and makes out with the guy for a while. Yes, it is pretty fucking weird, especially as there as no real transition from the smooching to the killing. The thought process of the undead Satanic priest could only have been something like, Before I kill this guy, I’d like to turn into a girl  and make out with him for a little bit.”Anyway, after the kiss, the sorcerer waits for about ten seconds, then unfurls his twenty foot long tongue and uses it to strangle the kid.

8) There’s an added element of psychological drama that runs even deeper than Star Wars.

Jonathan is following in the footsteps of his absentee father. An unloved boy, pursuing power for its own sake to fill a void. He endangers his loving girlfriend, Rebecca, not really recognizing what she has to offer him. After destroying their relationship, he tries to rebuild it through power, using magic to compel her to his side. After confronting his power mad father and witnessing his lack of love, Jonathan finally realizes that the path of power is and endless one of loneliness and destruction. Only then can he really understand, accept and return Rebecca’s love and begin a new life. 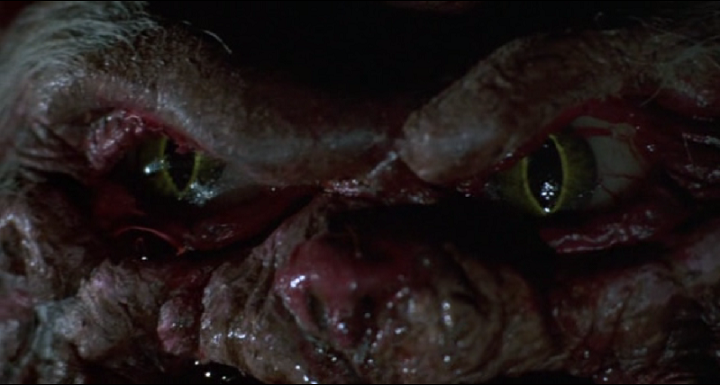 Yes, that is a separate movie, but one Ghoulies review is probably enough, so I won’t get to it. The marriage between metal and horror was such a sweet one. Chocolate and peanut butter for the angry long hair. Remember the Shocker soundrack? Oh man.

You wanted to like W.A.S.P. because the P.M.R.C. had an irrational (even by their standards) hatred of them. Plus it was rumored that their name was an acronym for We Are Satan’s People. But alas, they sounded like this:

10) Everyone comes back to life in the end. 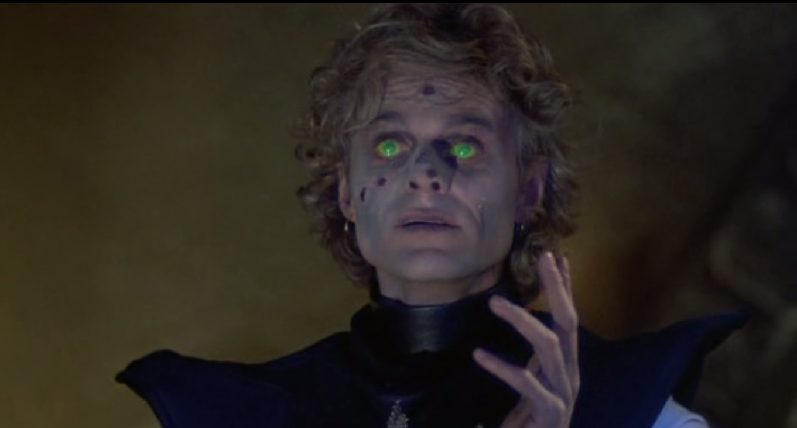 All of Jonathan’s friends are killed by the Ghoulies, Warlock Dad or Grizel and Greedigut. Their corpses are arranged in the basement and, just before Jonathan and Rebecca are about to flee the battle between Warlock Dad and Wolfgang, they all come back to life and join in the retreat. What is the explanation for all of this?

To quote the film:

They all jump in their cars and flee. Grizel and Greedigut, having capriciously decided to help them escape, smile and wave good bye. And that’s the end.