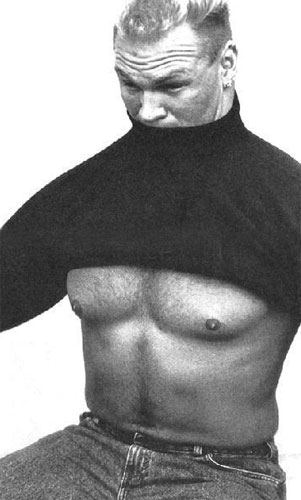 Jonny is scared of that Mullet…

A cop who enforces his own brand of justice.

Besides the fact that there are pictures of him on Gay Sports Fan Central, Bosworth’s chest is in full view during 75% of the scenes. At one point he’s brushing his teeth wearing bikini bottoms. William Forsythe calls him “Honey” and “Cutie Pie.” He has a dangly earring. He is wearing a tank top, which he removes before fighting another man. He only kisses a woman so he can betray her. He explains to his “partner” what strippers are for. Actually, that part was really weird. I mean, have you ever had to explain to anybody in a strip club why men look at strippers? Still though, I just refuse to believe that another man could find the Boz sexually appealing with that mullet. Literally, it was like Mullet 2.0. Like, he had a blond mullet growing out of a brunette mullet. It was so fucking gross! Jesus… Also, and this was pretty gay, but you know that wrestling move where one dude hoists another dude over his head? Well, one of the hoister’s hands needs to on the hoistie’s package. This move is performed at least four times during the film, for no apparent reason other than the sheer pleasure of feeling all that man-meat in the palm of your hand.

I counted 40 deaths, mostly by gunfire or just plain old fire. This film really did have some great violence. Hardly any of the biker-nazi dudes used handguns. Well, they all had handguns, but they just used them to point and people and yell mean stuff. When it came to killing, they all had automatic weapons. At one point, the great Lance Henriksen kills the Mississippi District Attorney and all nine State Supreme court justices with a glorious burst of machine gun fire. Also, and this was pretty refreshing, most people did not die alone. Seems that almost every time a trigger was squeezed, two people dropped dead.

I was shocked, shocked to find myself enjoying Stone Cold so much. I’m sure that has as much to do with my brain being rotten from watching so many terrible 80s Action movies as it does with any quality this film possessed. The two bad guys were awesome, though somehow they forgot to laugh at Boz’s mullet. I’m not even sure how any of the scenes got filmed. If I had been on set, I would have spent every moment within twenty yards of Bosworth doubled over and laughing my guts up. Moving on, Lance Henrikson was Ruthless as hell as the gang leader. He was into Satan, Nazis and Vikings, which is a black metal trifecta if there ever was one. Plus, he was so in character I didn’t even realize it was him for like five minutes. I’ve always had a softspot for William Forsythe. Even in films like The Rock or the Howie Long vehicle Firestorm (actually, that’s a good trivia question; what actor appeared in Brian Bosworth’s movie and Howie Long’s?) Forsythe is a pleasure to watch. And, when in a good film like Raising Arizona or Things To Do In Denver When You’re Dead, he shines.

Stone Cold had a twist beginning. The film started with this bizarre Cobra rip off. A bunch of baddies are robbing a supermarket. Bosworth just happens to be doing some shopping. But instead of killing the bad guys, he just beats ’em up with brooms and spilled cranberry juice. The twist is that we learn Bosworth is a cop and his badge and gun have already been taken by the Stupid Chief. Brilliant! But, sure enough, the FBI recruits Boz to help infiltrate a biker gang because… because… I forget if they even said. Probably because they wanted that Mullet in another state. I would. Also, Boz has a pet monitor lizard named Fido. But mostly he just has this insane double-mullet. Seriously, his acting was terrible, but I think the director was afraid to fire him because maybe Boz would try and infect him with that hair.

This is where Stone Cold fails. Boz is no Arnold. He is such a crap actor that he can’t even deliver this cheese. The best I could come up with is “I guess we decided not to negotiate” while staring over a dude’s corpse. I need to point out that if a single fucking one of you writes to tell me that the dude wasn’t really dead I’ll fucking strangle you. I KNOW. That’s why it’s not a Pre/Post-Mortem One-Liner. Speaking of which…

Just before Lance H. guns down the District Attorney, he says, “At times like this I’m reminded of my father’s last words, ‘Don’t son, that gun is loaded!'”

OK, so, Boz and the baddies are playing shoot ’em up inside the State Capital. The bikers of course ride their bikes indoors. One of the baddies decides that instead of shooting Boz, he’d rather rev the bikes engine and then try to run the world’s ugliest mullet down. Did I mention Boz has an assault rifle in his hands? So, the guy starts his charge and Boz shoots him. But the novelty is that the bike continues straight past Boz, out a window and into a HELICOPTER! Killing, of course, the bad guy pilot.

No, but a semi-truck carrying 3-dozen gallons of P2P (some dumb-ass made up drug–like meth) crahses into a gas station and goes BOOM pretty good. Lots of shit blows up real good, actually. Like the helicopter when the motorcycle hits it.

Bad hair is no obstacle to success. Oh wait, yes it is. Heard from Brian Bosworth lately?