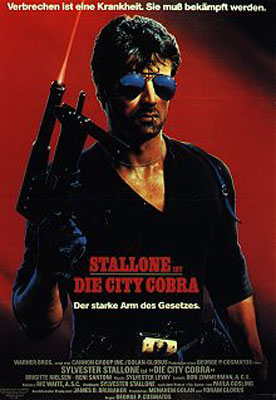 “Crime is the disease. Meet the cure.”

First of all, Sly Stallone spends the entire movie wearing the sort of sunglasses worn by Rob Halford in at least a half dozen Judas Priest videos. Add to that a group of terrorists who gather in a swimming pool, wear leather, drive motorcycles, and smash axes together like giant dildos. Stallone does romance a woman (the always comatose Brigitte Nielsen), but he seems so disinterested that it’s clear he’d rather be in bed with his male partner. And did I mention that Stallone’s character is named Marion “Cobra” Cobretti? You tell me whether or not that would pass muster in a gay bar. What else is a cobra but a long, angry snake? Stallone largely keeps his well-oiled pecs under wraps, but his “man of few words” is all-too-typical of the sort of character who would rather be in the company of other men, all of whom could flaunt their lack of emotions. Interestingly enough, in addition to the obvious love of the male form, the most negative portrayal is of a chubby-cheeked lesbian who betrays Stallone and his fellow officers. This just goes to prove that you can’t trust the dames. Oh, and this exchange:

Nielsen: “Do you believe you can fall in love?”

Stallone: “With a woman?”

I’d venture a guess of at least 50 murders, although it’s hard to tell during the final scenes. More could have been killed, but the director chose to de-emphasize action in favor of complex emotional drama. Seriously.

Even by the standards of the day, it’s pretty damn bad. The film was savagely attacked at the time as a right-wing fantasy, and I’m pretty sure the box office take was pretty lackluster. From the uncooperative supervisors to the partner who gets shot, no cliché is left unturned and no scene serves any other purpose than to “prove” that cops could end crime tomorrow if only they were allowed to use their gun at least fifteen times a day. The cast is uniformly awful, especially Stallone, who is less animated than a cigar store Indian. But give the top honors to Nielsen, who “acts” as if she was drugged, drunk, and in a deep coma.

Can I get away with a pre-killing quote to remember? [Ed Note: We’ll make an exception, this time. Consider yourself warned, punk] After hearing that a member of the terrorist group is about to blow up a grocery store, Sly responds, “I don’t shop here.” The man dies shortly thereafter.

As with the Death Wish series, Cobra is nothing more than the Right’s answer to liberal judges and excessive gun control. Only if cops are given free reign (no Miranda with these tough guys) will we ever hope to put a dent in the rising crime rate. Sly even has a monologue (appropriately monosyllabic and monotone) where he talks about how he throws the criminals in jail and the judges let ’em out. And because those at the top have no desire to fight crime, terrorist groups are allowed to organize, take hostages, kill decent men and women everywhere, and turn our country into a wasteland. How all of this was supposed to occur with Herr Reagan at the helm and a Third Reich-style Justice Department is beyond me, but I’m guessing it has to do with the fact that bearded, pot-smoking liberals have all the power and tough-on-crime hard-liners are forced to cower in fear in their back rooms and forest retreats.

The main creep is tossed into a blazing furnace at the end, although it’s much more interesting to watch a frightened teenager get shot in the back while running in slow-motion. Other than that, it’s pretty routine.

It is worth killing hundreds in order to save Brigitte Nielsen.