103 Minutes, Rated R for Puking and Shitting at the Same Time, castration by dog, fun and games with broken glass.

Fair Value Rating of Kick-Ass: $4.50. The quality of the actors almost manages to salvage the film from the miserable dialogue that they are given. The best summer film for tastes that prefer fight sequences with extra red sauce and grotesquerie.

Now It’s Time for a taste of Evil Dick:

Mark Millar is the stupid man’s Garth Ennis, briskly walking a trail blazed by better writers and collecting every royalty that he can acquire. A movie for manchildren by manchildren, KickAss 2 tries to improve on the original satire by being more violent, unpleasant, and vulgar. Instead, Jeff Wadlow’s film comes off like a script written by a  third grader. A third grader who somehow believes that saying the word motherfucker 100 times will magically transform you into Quentin Tarantino.

The whole ‘deconstruction of the superhero’ film is a wave that crested in 2010 with Super, Defendor, and Kickass. Kickass 2‘s assortment of community service oriented neurotics succumbs to being more a conventional super-hero film than satire, and is poorer for it.

There generally tends to be three types of superhero sequel. There’s the ‘retaliation’ sequel, in which forces of society attempt to suppress the hero (X-Men 2); there’s the ‘disempowerment’ sequel, in which the hero is deprived of his special abilities and forced to find his inner heroism (Spiderman 2, Iron Man 3), and there’s the ‘escalation’ sequel, in which the hero’s actions trigger a host of supervillains inspired to become living legends (Iron Man 2, The Dark Knight). Kickass 2 is an ‘escalation’ sequel that putters to an underwhelming melee royale between the assembled mobs of heroes and villains. Kickass (Aaron Taylor Johnson) and Hit-Girl (Chloe Moretz) are trying to slow down the vigilantism in favor of the ordinary travails of high school. But their example has inspired a wave inept do-gooders, who come to be organized by Colonel Stars and Stripes (Jim Carey). On the other side, the former Red Mist (Christopher Mintz-Plasse), embittered by his father’s death, renames himself as The Motherfucker, and sets about recruiting an army of would be supervillains.

Kickass is really inferior to The Boys, or even Wanted, as a satire of the iconic characters of comic books. Kickass is Daredevil; Big Daddy and Hit Girl are Batman and Robin; Night Bitch is Black Canary; Insect Man is Spiderman; Star and Stripes, Captain America. On the villain side of things, it’s also by the numbers archetypes- the evil millionaire, the evil Asian, the evil Russian. 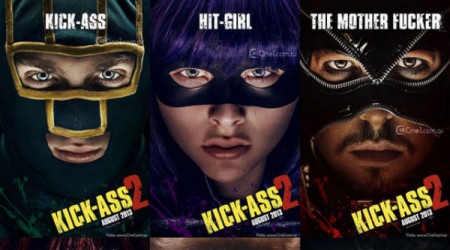 Best Superhero: Lois and Lou (Angelica Jopling and Enzo Cilenti). A middle aged married couple, their heroic emblem is a missing child poster for their abducted son. They’re a charming mix of banality and weirdness, a pair of after-school special mascots who are far out of place amidst the ultra-violence.

Best Supervillain: Mother Russia (Olga Kurkulina). Ivan Drago in drag with an eyepatch, using Xenia Onatopp’s signature move, this character nevertheless gets the best action sequence of the film, as she slaughters an escalating parade of first responders with common suburban yard equipment. 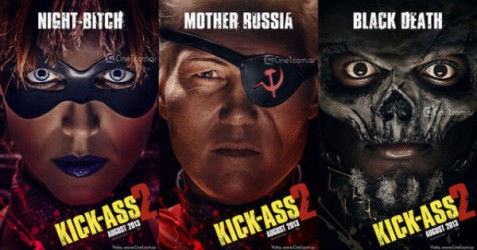 Sociological Muckery: The image of the superhero has so subsumed the cultural consciousness that we forget the antecedent of actual vigilantism. From the Boston Tea Party ‘indians’ to the Wide Awakes to the Ku Klux Klan, America and most of the world has had a long history of masked mob violence advancing the cause of ‘justice’. Indeed, the conventional superhero is a fascist character; the sublimation of the self into a ruthlessly violent being of action who enforces the social order through fists and eschews the pretense of law. A part of the appeal of the superhero and the vigilante is not the fantasy of personal expression free of social constraints, but a form of self-annihilation- a reduction from being a man to being a mere mask, an outline. It can be said that Batman and many other classic heroes have sacrificed personhood for the advancement of a cause, chosen an ablation of being in preference to an existence of therapy and maturation.

I love comic book stories, but I hate comic book serialization. There can be few hells as singularly awful as the continuity of a popular superhero. One Gwen Stacy or Genyosha Genocide, one Jason Todd, that is more than enough for a human to endure; but Parker and Wayne and Logan must have bi-annual, even weekly traumas, casualties, mutilations, and humiliations. Every ally will go insane and become an enemy; every lover will be kidnapped, raped, and dumped in a fridge; no enemy will ever be rehabilitated, only endless recidivism. The world never stays saved and the smiles of the fickle public inevitably cycle into the next season of calls for Spider Slayers or Sentinels. The Marvel and DC universes are worlds not worth saving, ultimately, because they never change, never grow, only repeat a samsara of calamity and conflict.

The Kick-Ass franchise is interesting for being an anti-super hero film. Not in a purely parodic way, but more as a low-brow relative of the themes of Nolan’s Batman trilogy. Vigilante violence, it suggest, begets torture, death-squads, kidnappings in panel vans. The sort of things that the people of Latin America well remember, but which the USA  has had the fortune to have avoided in the span of living memory. Wadlow’s movie is anti-romantic, reminding us that eschewing the social order means a steady escalation of atrocities. There’s no rules, no referees, just a moral abyss, wherein the heroine suggests feeding a man his own dick, and where the villain employs rape as a tactic against the heroes. If Kickass seems heroic it is only because his violence is without cruelty or creativity as compared with the methods of his allies and opponents. 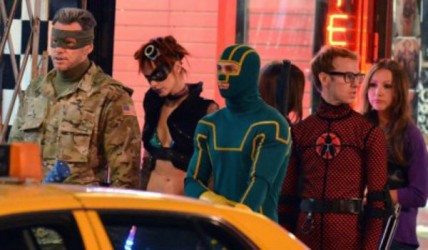 Conclusion: I thought that Chloe Moretz, and Aaron Taylor-Johnson managed to bring humanity to the beats between awful dialogue. Jim Carey’s character was a more functional, and thus more terrifying, variant of Fire Marshall Bill from In Living Color. Christopher Mintz-Plasse captured a true enfant terrible, one who embarks upon atrocity, and then has the flinch of innocent shock midway through his crimes. His character is a terrific argument for high estate and inheritance tax laws.

If the revenues of this film were going to the cast, I’d recommend this film. But I don’t want to encourage Mark Millar. You can say many nasty things about Rob Liefield (and you’d be right), but there’s an aesthetic consistency to Liefield’s incompetence, a style that spins into some pure adrenal realm, a Platonic version of male adolescence embodied. Seth MacFarlane may not be everybody’s artist/writer but he has incredibly good framing and a baroque sense of design. I can think of no signature aesthetic of Mark Millar except provocation, and a provocation that lacks in true perversity, only mildly retreading the horrors of writers such as Grant Morrison. Also, Millar does not know how to write female characters. At all. I’m strained to recall another film that is so utterly reductive of teenage girls.

To express what Millar signifies to me, I will paraphrase and mutilate Animal Farm: