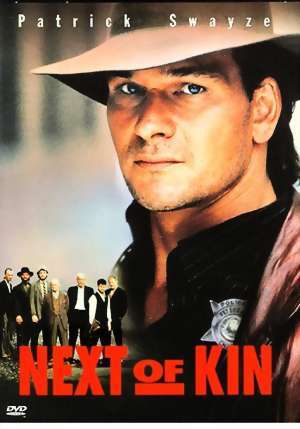 An Eye For An Eye, A Tooth For A Tooth [Ed Note: It’s No Roadhouse]

Lisping, dancing, super-stud, Patrick Swayze stars as a Hillbilly cop in Chicago. This guy has always screamed homoeroticism to me, largely because I believe that anybody who knows how to dance must be gay. His hillbilly clothing is hardly rugged and probably best described as an “outfit.” He has a wife, however, and koodie- transmitting activities such as kissing are implied, though basic decency dictates that they not be shown onscreen.

Swayze and his brothers are very close and like to wrestle. He arrests his older brother at one point and throws him in the pokey. “So what,” you say, “they’re brothers.” Remember my friend, “sons of the soil” have a different outlook on the limits of familial intimacy.

There are a lot of people in this film who are stars today – Helen Hunt, Ben Stiller, Liam Neesan – pretty much everybody but Patrick Swayze, who has transcended mortality. Does that make Next of Kin a good film? Not quite.

The film boarders on absurdity right from the git go, but goes all the way in when a platoon of hillbillies arrive to back up Swayze in his climactic battle with the mob. Bows, throwing axes and bear traps are deployed successfully against the mafia, who have no means of defending themselves, apart from automatic assault rifles. But none of these qualify as the novelty death.

It’s important that you understand something. This description is in no way exaggerated. The scene I am about to recount actually happens in the movie, as recounted here.

First, let’s back up a little bit. One of the hillbillies we’ve seen in the background during visits back to the hills is a guy who looks a little bit like Randy “Macho Man” Savage. The guy is always stroking a big snake. Whether this is for religious or homoerotic reasons is never totally clear. When the hillbillies back home learn that a second brother has been killed, we see them gearing up for retribution and boarding their own bus to Chicago. This is when we get the…

Macho gay religious man is packing his pet snake and says “we’re going for a trip.” A poor excuse for a one-liner, but what do you want from a bunch of hillbillies? They normally communicate by blowing on jugs.

So the hillbillies are fighting the mafia in a cemetery. They loose a couple of hounds on one of the mob soldiers who, armed only with a machine gun, flees in helpless terror. The hounds chase him into the hillbilly bus and macho-gay-religious man bars the door. What could be in the bus? Hundreds, if not thousands, of snakes. Cut to an exterior shot of the bus where we hear the Mafiosi scream. So just to be clear, this guy was killed when hounds chased him into a bus full of snakes. That’s the kind of death that can get you a wikipedia entry all by itself, like the dude who tripped over his own beard and broke his neck.

I can’t help that point out that the hillbillies would had to have planed this method of attack ahead of time. Before the even left for Chicago. “I’ve got an Idea! We should stop poopin’ in our drinkin’ pond!”

“I don’t know Jessiper. That sounds like demmi-crat talk to me. But I got a good idear. We fill a bus up with the whole bus with poisoned snakes. Then when we a git to Chicago we have the hounds chase one of them city slickers onta the bus and lock up the door!”

“How r we gonna git all the ways ta Chicago withs a two thousans poisoned snakes on a the bus?”

Not much. In fact Next of Kin is pretty weak as an 80s Action film, except for the jaw droppingly stupid novelty death and other camp values. There is the idealization of the rural, an old theme in American politics dating back to the revolution. While the rest of the world regards their peasants as peasants, we like to pretend that ours are noble and wise. That’s because our idea of wisdom is using hounds to chase someone onto a bus full of snakes.

Swayze used to pick his scripts with Nancy Reagan’s astrologer.