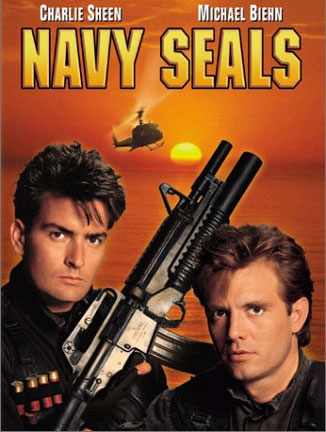 I know what you’re thinking. How could there possibly be any homoeroticism in a rightist action movie about the navy staring two hunky men with rhyming names? Shockingly enough, gayness abounds. In typical 80s Action fashion all heterosexual contact is broken up by the chaperon of violence. A SEAL’s wedding is interrupted when he is called to duty. One SEAL takes a woman to a private area on the base and embraces her only so his buddies can barge in with machine guns and scare her. Finally,on the way to that wedding, Charlie Sheen jumps out of a moving car and over a bridge in act of non-violent protest of the heterosexual union.

You would think the hero of the film being the Fred Phelps of straight marriage would be the crescendo of gay militancy. Until you see theSEALS horse around on the golf course. One SEAL leaves his shirt at home. Another wears a small pair of purple and green shorts. Another opts for a tank top. A forth goes with an even smaller pair of shorts. Pink ones. All of this is set to Bon Jovi singing “The Boys Are Back in Town,” because the original version is too butch. It’s damn near a shot for shot remake of that SNL skit: the commercial for “Schlitt’s Gay” brand beer. One of Sheen’s buddies pokes his pooper with the head of a golf club. I think you might have glossed over that last part. One of Charlie Sheen’s pals sticks the head of a golf club up his ass.

Gayest dialog:At one point a commander asks Charlie Sheen how close he is to an enemy. Sheen replies, “if I was any closer, I’d be inside him.” I don’t doubt that for a second.

I came up with a respectable 34.

A terrorist says something in Arabic. Charlie Sheen asks another SEAL for a translation.

“Something about your mother.”

Sheen shoots the terrorist and says, “Never talk about mom.” 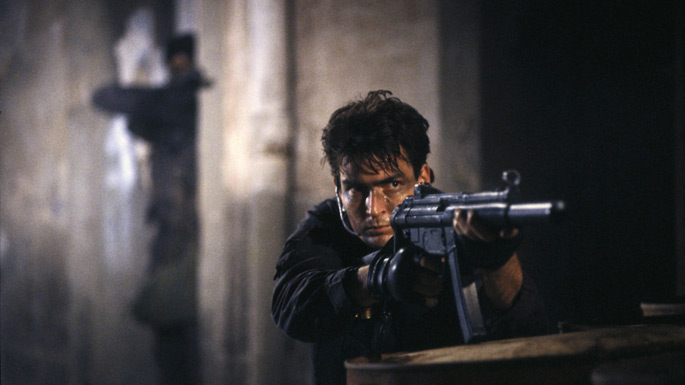 Renting this film turned me into a living joke. I felt like the stupid customer in Clerks who picks up a video box and gleefully exclaims, “ooooohhhh, Navy SEALS!”I’m sure the clerks at the store thought the same thing. Unlike some 80s Action, this one is made with professionalism. That’s about all that can be said for it. Much of the movie takes place on the home front and, apart from the gay golf scene, is just plain boring. The subplot is about a journalist who knows everything about the terrorists because she is half Lebanese. The U.S. government doesn’t know anything about the terrorists because they aren’t half Lebanese. So the SEALS half to convince the reporter to… see how boring this is?

For an 80s Action film about terrorism, there isn’t much stupid political content. The terrorists are all Arabs, which could be construed as racist if the film was set in Ireland. The portrayal of political realities is too minimal to be ideological. The terrorists are pissed about the shelling of Lebanon so they want to shoot down planes. That’s about all there is to it. The recent rush of jingoistic films from Hollywood is more overtly political. SEALs are now portrayed as borderline superheros and the current propaganda is meant to be taken seriously, rather than as mindless fun. Clearly, your supposed to watch Navy SEALs with a sixer and go, “wow,” those guys are bad ass! As opposed to , “these brave heroes have shown me why are munificent leaders have determined, in their infinite wisdom, that our great nation must be at war forevermore.”

I learned about guns and shit because the SEALS helpfully describe what they are doing. They would say, “switching from starlight scope to thermal,” and I’d learn the difference between the two. I got the feeling that SEALs exist somewhere on the cub/bear spectrum, but the film didn’t fully explain it.