EDIT: Time moves on, and Donald Trump simply trumps everything we have ever seen in American politics to this point. He will be immortalized later. 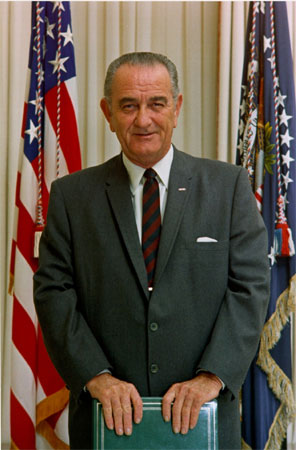 Not only the biggest prick, but also possessing the biggest prick, that is if you believe the rumors. My favorite Johnson story involves a cabinet meeting where he was asked why we were in Vietnam. Pulling out his penis, which he called “Jumbo,” LBJ roared, “This is why!” One cannot imagine another President doing the same thing (fine, perhaps Carter). He treated his staff like crap, manipulated everyone he ever met, belittled and humiliated his wife in front of others, and used the legendary “Johnson Treatment” to reduce women and men to tears. He also conducted meetings while on the shitter, slept with more women than JFK, Harding, and Clinton combined, and had a staggering ego that knew no bounds. That said, however, the U.S. Senate has never seen a more brilliant legislator. Uncouth, brutal, and narcissistic beyond belief, he’s America’s eternal barometer for prickness in the White House. 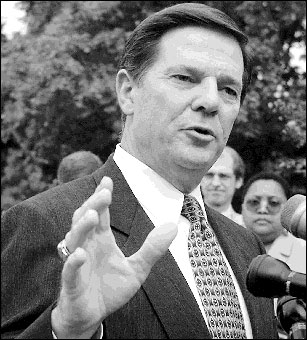 The former bug exterminator from Texas is the worst of all possible worlds: mean, vicious, and dangerous. From kidnapping left-wing children and shipping them off to Conservative Christian re-education camps, to holding some of the most reactionary, bigoted opinions outside of a Klan rally, DeLay rode to prominence in the 1994 “Republican Revolution” (and the nauseatingly simple-minded “Contract With America.”) that, in reality, reflected the will of only 9% of the American people. But that’s the strange thing about elections: you actually have to show up to make your vote count. One of a select (and powerful) few who believes that the Constitution is in place to serve private industry, and that a “public interest” is the invention of unholy atheists who wish to resurrect Soviet communism on American shores. As bad as Dennis Hastert is, pray for his continued good health, as Mr. DeLay is but one step from being Speaker of the House. 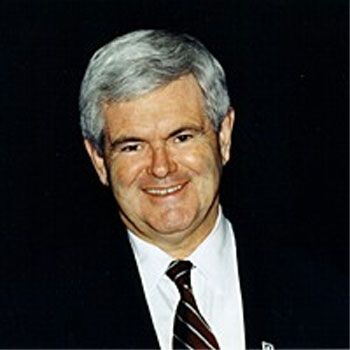 No one has ever fallen so rapidly after securing the very pinnacle of power. Still, it’s not hard to see why. Seeking to reshape the American political landscape into a leaner, meaner version of Boys’ Town, Gingrich sought to eliminate all business regulation, rebuild orphanages on a mass scale, shut down the government after being denied a prime seat on Air Force One, and regulate the sexual behavior of everyone but himself. After all, this is a man who served his ex-wife divorce papers while she recovered from cancer, and managed to scream the loudest for Clinton’s impeachment while simultaneously bonking his much younger aide. He wrote bad WW2 vanity books, waxed weirdly about Alvin Toffler, and argued with tight-assed sincerity that America should eliminate any semblance of a safety net. Except of course if corporations need tax breaks. 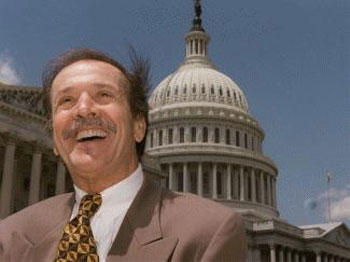 Here is a man who ran for office solely because he had difficulty securing a permit for his restaurant. Ah yes, the nobility of public service. While dying as ridiculously as he lived (thus sparing us several decades of moronic pronouncements from the House floor), he was a prick because he never possessed even a smidgen of concern for the political process. He once asked that the House hurry up and quit using so many big words, to which he was told, “We are crafting legislation here, Mr. Bono, not sausage.” Before Arnold or Jesse, there was Sonny — a shining example of why democracy is broken, battered, and on its deathbed. 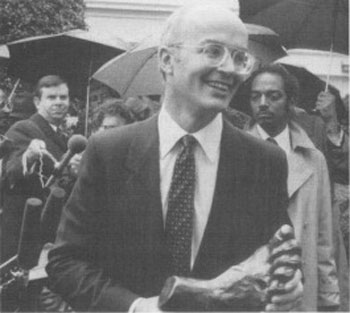 “I do not know how many future generations we can count on before the Lord returns.”
–James Watt, February 5, 1981″We have every kind of mix you can have. I have a black, I have a woman, two Jews and a cripple.”
–James Watt, September 21, 1983

Reagan’s Secretary of the Interior is my choice as the worst cabinet officer in the history of the earth. Yes, worse than Goebbels. Watt, in charge of the environment and its protection, was a cock-chugging, full-fisted whore for the timber and energy industries; a patron saint of privatization, profiteering, and land rape previously unimaginable. It is interesting to note that Watt was let go not because he wanted oil derricks on every square inch of uninhabited earth, or that he would have rested comfortably with 100,000 extinctions on his conscience, but rather due to a politically incorrect joke about cripples and minorities. Only in America is an epithet worse than mass polluting of rivers and streams. 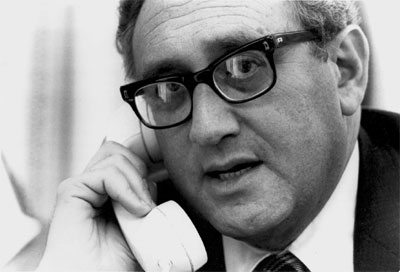 A war criminal extraordinaire, ol’ Hank is the epitome of the ruthless, amoral statesman. On his watch — and at his behest — millions were butchered in Cambodia, East Timor, Vietnam, Chile, and a few other countries that aren’t worth remembering. With only a handful of other U.S. officials, he is a man I could envision personally slicing the throats of leftist rebels and socialist reformers. There’s a reason he didn’t want to reveal his contacts when asked to head the 9/11 committee; it might be a bit embarrassing to admit to sharing a bed with the world’s most brutal thugs, dictators, and assassins, and even some outside the Bush administration. 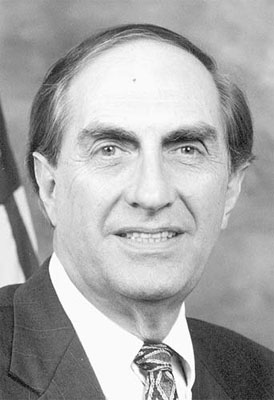 Fine, his appearance on this list is only due to the fact that he was “my” Representative for what seemed like a million terms, but I defy you to find a man who has chugged more Pentagon cock than this asshole. Far, far to the right of even Reagan on every issue, he used his sinister power to help keep Colorado Springs the soldier-infested shithole it remains today. This is a man who would watch the state of Colorado burn so long as Fort Carson stayed open. Plus I went to high school with his daughter, and she was a prissy cunt fucker who I wanted dead just about every other day. 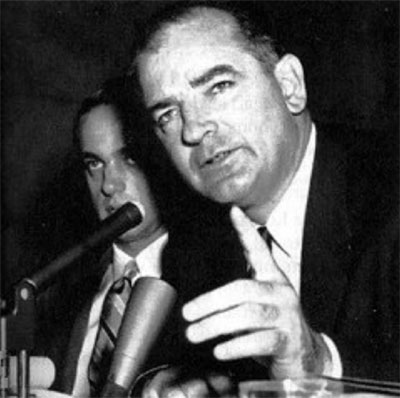 An American saint, you cry? Fuck that. This devious, power-hungry hypocrite used every bit of power at his disposal to undermine the federal government at a time when our very existence was in doubt. Too cowardly to speak for himself, he used other prominent figures to spread lies, gossip, and hateful prose to a gullible public. Most importantly, his vision of an “agrarian utopia” would have sent the United States careening into the pits of disaster. Provincial, racist, and arguably the father of the horrific states’ rights doctrine, TJ helped design the Kentucky and Virginia Resolutions, two little gems that would have rendered the Constitution useless and broken the back of the rule of law. Everything progressive, dominant, successful, and inspiring about America met with his opposition; and his romanticization of the Southern planter (and slaveholding) class helped create a monster that lives with us to this day. 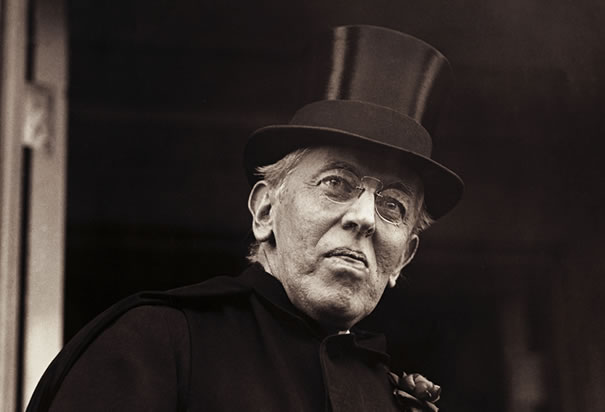 I’v spoken about him before on this site, but hear me once again — we’ve never had a worse President. For one minute I will believe in an afterlife so that I can imagine his frail body being cracked and broken on the endless racks of hell. Not only did he send hundreds of thousands to their deaths in a silly war that to this day no one can explain, he ignored (and thereby exacerbated) the influenza epidemic, crushed civil liberties, left giant, corn-filled turds on the Constitution, and childishly refused to resign even after losing half his brain to a massive stroke. His miserable Presidency ushered in years of repression, hysteria, and yes, the rise of Hitler. Fuck him and may history piss on his memory forever.