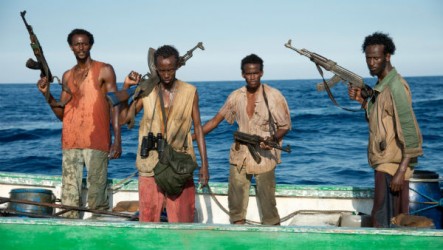 Drink up, me hearties, yo ho!

Fair Value of Captain Phillips: $19.00. A lean and tense procedural that is the first suspenseful film that I’ve seen this year.

The Grit Before the Myth: How will the Somali pirates be depicted in 100, 200 years? Will time accrue these criminals the same ramshackle romance afforded to past buccaneers? Or will the cinematic record of these times provide some bulkhead against exaggeration and myth-making?

Piracy off the Horn of Africa works through a series of calculations. Maersk and Lloyd’s calculate a tolerable rate of piracy incidents and ransom payouts. The international naval coalition ensures the pirate bands do not become excessively bloodthirsty. And the warlords of Somalia anticipate enough ransoms that it beats dying of starvation.

Capitalism makes dogs of us all. Captain Phillips (Tom Hanks) has orders to skip the protected convoy lanes in order to save fuel on the voyage of the MS Maersk Alabama. ‘Captain’ Muse (Barkhad Abdi) has to go out and deliver another ransomed ship to his warlord, this week, or his village gets massacred. And Captain Frank Castellano of the USS Bainbridge (Yul Vasquez) gets his orders directly from the White House: don’t let the pirates get their hostage to Somalia. One of these men has to crumble. And it’s not going to be the one with the Navy SEAL team on his decks.

Paul Greengrass has delivered another excellent thriller by keeping the film intimate and focused. He creates a claustrophobic, narrow setting on the ships; and then zooms out to large sweeping shots of the various craft out on the ocean. There is no sentimentality, and very little small talk; there isn’t a moment of the film without action after Captain Phillips has gotten his freighter underway.

The first third of the film is a cat and water buffalo chase, as Captain Phillips uses subterfuge, speed, and the sheer bulk of his freighter to discourage and elude the pirate skiffs. Then, after boarding, the film becomes a toned down Under Siege, as pirates seek to round up the crew while the crew exploit their superior knowledge of the freighter to elude the pirates. Finally, the film resolves into a hostage movie, as the pirates abscond in a life boat with their hostage. 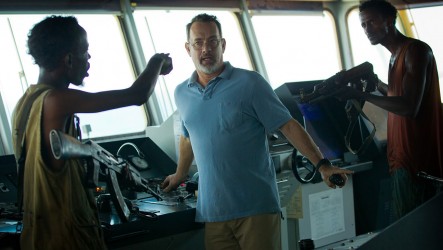 Captain Muse and his small band are a classic tragedy of how the vision of the big score blinds men to the fast closing jaws of the law. He’s a skinny scrapper with the determination of a runt to prove himself; and he persists long after the other pirates back off, to his peril. As Captain Phillips tells him, “the problem isn’t that I talk too much; it’s that you’re not listening enough.”. His relatively amateur crew includes the requisite hot head (Mahat Ali) and the wide eyed rookie (Faysal Ahmed); that being said, the fraying nature of the pirate band provides the tension, as it’s not clear whose lead they will actually follow.

Tom Hanks delivers another scaldingly cathartic performance. Richard Phillips is a competent, pragmatic Yankee skipper; but all of his reason and his attempts at manipulation fail to resolve the crisis, and he gets brutalized and traumatized. He really conveys a working class middle manager, a man who is neither a coward nor an idiot, who nevertheless is unable to cope with the ordeal that he is put through.

Though not quite as great a film as Sidney Lumet’s Dog Day Afternoon, this film is in the same league. If you want to see a smart film about a botched robbery, this is a strong candidate for the genre.