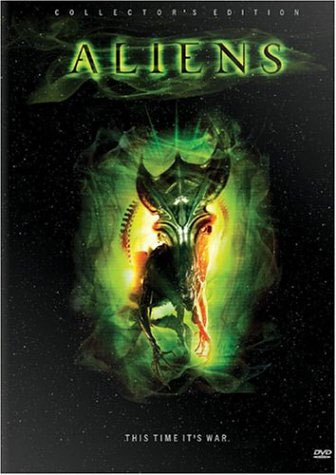 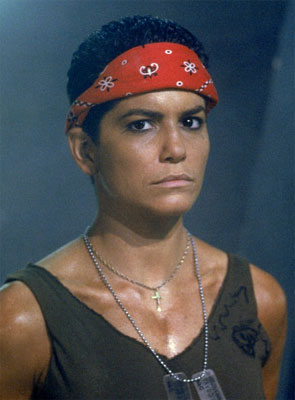 Cameron’s Aliens represents a massive departure from your typical 80s Action sausage-party. Namely: Vasquez. Jenette Goldstein’s portrayal of the tougher-than-nails uber-machine gun welding female grunt is the reason that so many of us are able to enjoy threesomes today. Think about it — the 70s were all about free love, yet how much guy-on-two-plus-girls action did any of you old timers get? My guess; not very much. Yet, in the 90s and today, ugly fuckers like me can fairly routinely get two girls to go down on each other while we get to slam both of them. I claim that much of it has to do with Pvt. Vasquez and the “curiosity” that young girls suddenly felt for one another. For this reason alone, I will always have a soft spot in my heart for Aliens. Thank you Mr. Cameron, thank you! And of course, Ripley, in her half-shirt and curiously tiny panties, helped the cause, too. Oh, and for you fellas, there is that scene where all the dudes are walking ’round in their underroos and most of them are pretty sexy. Especially Al Matthews. Boing boing boing!

This is one of those rare instances where the quality of the Corpse Count totally transcends the quantity. All said and done, thirteen deaths occur during the course of the movie. But oh how they die!! Truly glorious. And really, Bishop fucking died, too. Now, if you are talking number of Aliens who died… well, that’s a huge number. Especially when you take the awesome Sentry Gun scene into account — robotic guns that lay waste to a couple battalions of creatures. For no apparent reason whatsoever (and no justifiable reason at that) they were left out of the theatrical release. Thank you Satan for DVDs with director’s cuts.

What’s the opposite of bad? Oh yeah, Off the Hook Motherfucking Amazing!! As a film, Aliens is incredible. As an 80s Action entry, it destroys the genre. Really, it shouldn’t even be here, but it’s too late to turn back now. One way to look at Aliens is as a subversive commentary on the gung-ho militarism of the 80s. You’ve got the toughest marines in the galaxy — sweaty, brutal, unrefined — and they’ve got the best and biggest guns imaginable. Serious, Vasquez and Drake spend most of the film with the world’s largest strap-on phalluses rigged to them via steady-cam mounts. Anyhow, all this bluster and ra-ra USA-ism is no match for the Aliens. In other words, stop jerking yourselves raw over the defeat of Communism. Brother, we got bigger fish to fry. Also, of course, represented in Ripley is a woman who loves her cat and uses her maternal instinct to defeat the biggest, baddest Alien of all — with that awesome fucking loadlifter thing. Take that, stay at home moms. 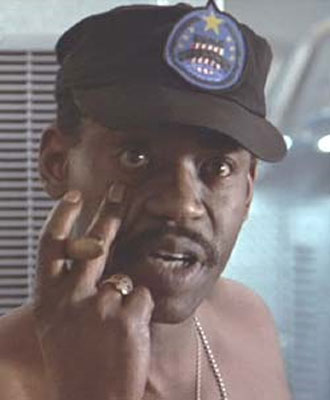 Other great scenes that spring to mind: For me, the best scene in the film is when the marines get trapped inside the cooling tower. They are in a “bug-hunt” and have ventured deep inside the bowels of the colonist’s outpost. Below the reactor’s cooling tower, is a heat source that the Aliens like for whatever reason and this is where they store their human victims and incubate their hellish young. Lt. Gorman has sent them in and he, Ripley and Burke (Reiser) are watching the action on camera from the Landing Vehicle — the AMAZING Landing Vehicle which rivals the Millennium Falcon for the title of coolest god damned thing in a film. Anyhow, Ripley notices that they are close to the reactors and if they fire their weapons, they will destroy the coolers and cause the reactor to melt down. Which would be bad. So Gorman gives the order to Sgt. Apone that all ammo must be discharged from the guns and collected, which Apone grudgingly does. Of course, Vasquez and Drake are not having it. Neither is Hicks (Michael Biehn), who busts out a pump-action shotgun. The marines wind up getting attacked by Aliens and pussy-faced Gorman just sits there with a look of helpless horror on his pussy-face watching his men get devastated.

In what is possibly the most humane scene ever filmed in a (sadly) fictitious movie, Ripley shoves Gorman out of the way like the soft twat he is, rams the Landing Vehicle through a door, tears ass down a hallway before finally ramming the damn thing through a wall and saving the marines that are still alive. I still, nineteen-years later, tear up when I watch or even think about this scene. Monumentally wonderful. What Ripley displays — selfless empathy for others — is why humans are able to defeat Aliens (or Soviets). Great shit. 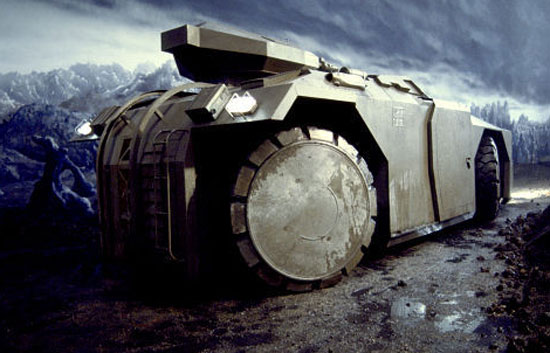 Additionally, the rest of the film is littered with great scenes. Like when Ripley and Newt get trapped in the room with the egg-layers. That shot of the two of them screaming in silence on the video monitor is chilling. Every word that comes out of Bill Paxton’s mouth is pure gold. He’s never done anything since that is remotely as good (I didn’t say before because Paxton’s portrayal of Chet in Weird Science is fucking classic in the best sense). Michael Biehn is terrific. Reiser is the smarmiest schmuck ever — I’ve never prayed so hard for the death of a fictional character. The Drop Ship crashing was great… With the exception of Ripley going back to save the kid I can’t think of a bad moment. Not that wasting the big bitch Alien was bad, but like… she’s seen these Alien fuckers kill 20 of her friends — many of them hard asses or Yaphet Koto — yet somehow she thinks she can rescue a six-year-old? Just a silly plot direction. It could have been handled better. Still, Aliens fucking rocks.

Oh boy… Aliens is full of them. I return to Bill Paxton and his character Hudson. Seriously, Aliens is about a bunch of space marines who go to a desolate planet and do mortal combat with crazy acid-blooded killer aliens and a dozen people scream to death and what most people remember about the film is, “They’re coming outta the walls. They’re coming outta the goddamn walls, we’re fucked! We’re totally fucked!!” Obviously, his lines are a combination of his delivery, the writing and the directing, but something really special happens every time Hudson speaks. Cinematic magic. But, rather than wrecking it any more with cheap analysis, let me just offer some quotes:

“I’m ready, man, check it out. I am the ultimate badass! State of the badass art! You do NOT want to fuck with me. Check it out! Hey Ripley, don’t worry. Me and my squad of ultimate badasses will protect you! Check it out! Independently targeting particle beam phalanx. Whoa! Fry half a city with this puppy. We got tactical smart missiles, phase-plasma pulse rifles, RPGs, we got sonic electronic ball breakers! We got nukes, we got knives, sharp sticks…”

Just reading it kills me… as does this:

And how could we forget:

Hudson: Well that’s great, that’s just fuckin’ great man. Now what the fuck are we supposed to do? We’re in some real pretty shit now man… That’s it man, game over man, game over! What the fuck are we gonna do now? What are we gonna do?
Burke: Maybe we could build a fire, sing a couple of songs, huh? Why don’t we try that?
Bishop: I’m afraid I have some bad news.
Hudson: Well that’s a switch!

Hudson’s Pre-Mortem rant (his own Mortem I should add) is maybe the best “last-words” ever spoken. Or yelped:

Still though, and I hate admitting it, but the best One-Liner comes from Ripley herself. She has just mentioned nuking the complex from space, “to be sure,” but Burke (asshole) starts fapping off about the significant dollar value of all the equipment. In her absolute steeliest voice, Ripley leans in with jaws clenched and says, “They can bill me!” Awesome. 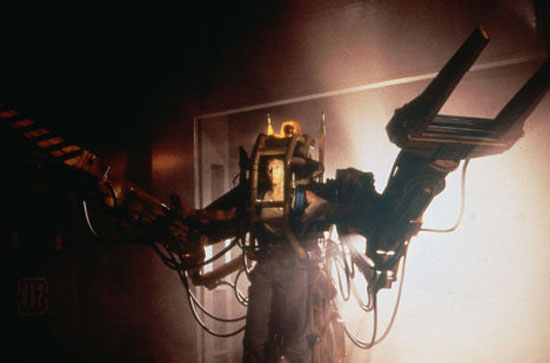 As mentioned earlier, Aliens can be seen as a stab at 80s/Reagan/military/phallus-lovin’ chest-pounding. The marines are useless. It is only the iron will of a middle-aged woman, the grit of a child and the determination of a swishy android that save the day. Even the bad guy is a girl. Aside from that, I really liked how Burke’s money-over-people mentality is mocked and ridiculed. As Hudson says, “I say we grease this rat-fuck, son of a bitch right now.” I agree. So, to recap, there is no Stupid Political Content in Aliens. 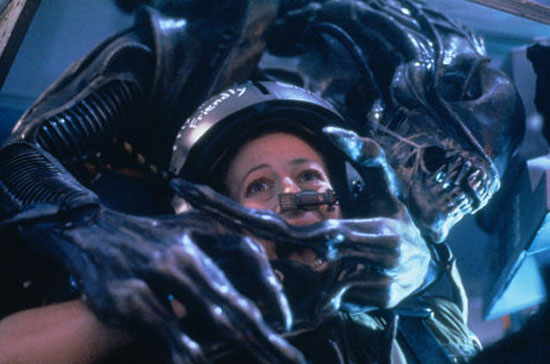 Thats easy, but complicated. First though, the penultimate Novelty Death has to be when the chick piloting the Drop-Vehicle turns around to see an Alien smiling at her. She tries desperately to draw her sidearm, but… SPLAT! But, the best is Bishop being torn in half by the Queen. I know he doesn’t die (he’s not really alive) but fuck me, that was great.

Was There An Atomic Blast At The End

Of course. A good one, too.