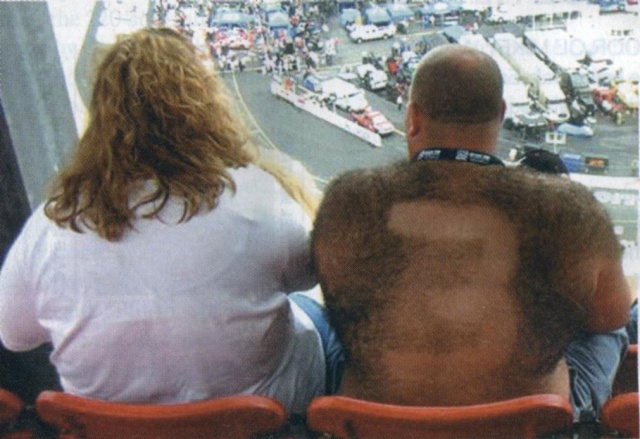 It appears that Soccer Moms are now a thing of the past. The most appealing and powerful new demographic is the “NASCAR Dad” which, if you believe several reports, could very well number into the millions. In an election that promises to be close (and where every vote will count), isolating and targeting coveted voting blocs is akin to certain victory, as evidenced by President Bush’s pathetic attempt to secure the favor of Mexicans by re-classifying illegals as “guest workers.” The change is cosmetic of course, and nothing more than an election year ploy, but symbolic gestures mean everything in the world of politics, and the NASCAR issue is just another example of such empty rhetoric. Even today, President Bush made an appearance at the Mecca of the NASCAR world, the Daytona 500, to pat backs, shake hands, and pretend that he gives a shit about drunken rednecks driving around an oval at high speeds. Bush may indeed be an idiot and one of the least cultured men to ever occupy the White House, but even he would rather watch a baseball game or curl up with a comic book than pretend auto racing resembles a “sport.”

Who are these “NASCAR Dads” and why are they so influential? They are not just the folks who spend hours each week watching the races on Fox, or even baking under the hot sun at assorted racetracks across the Deep South. These are also the very men who inherited a legacy from their parents and grandparents regarding the inherent evils of modernity. Of course, they might not be as resentful of running water and indoor toilets as their grandpappies, but they are the first to grit their tobacco-stained half-dozen teeth when faced with Darwinism, literacy, secularism, or even bound, printed matter (the King James Bible excepted, of course). The NASCAR Dad, unlike the Unwashed Hillbilly, or the Rural Yokel, is certainly not as overtly racist or backward as his forefathers, but such instincts remain buried, waiting for the right opportunity to declare themselves. With the advent of talk radio and other media outlets, these postmodern savages now have euphemisms and “ten dollar words” to disguise what in the past would be declared openly and without apology. Hell, you might even hear a Earnhardt-loving cracker say how much he “just loves that Tiger Woods,” as if the acceptance of a half-black millionaire golfer is enough to erase generations of lynching. But for the NASCAR Dad, it certainly is. He is the first one to tell you how far his kind have come, only don’t get him started on affirmative action or any black person who continues to refer to the issue of race. NASCAR Dads like their colored folks nice and respectable like Clarence Thomas, Condi Rice, and Oprah.

NASCAR Dads hate taxes and left-leaning social issues, which might make sense if these shower-averse imbeciles realized that the rich and powerful still despised them, even as they were being courted for votes. Most of the auto racing set continue to be the working poor, although middle class status is not entirely unheard of. But to distance themselves from a party or political philosophy that has historically benefited the lower classes makes little sense until we realize that NASCAR Dads, despite having ‘pinions n’ shit, are as woefully uninformed as the hood-wearing Klansmen of the past. And with the flood of corporate advertising involved in NASCAR (have you seen the billboards that pass for cars?), it makes even more sense that these bumpkins don’t want no sass ’bout big bidness. Hell, auto racing survives only because the suits on Madison Avenue have taken notice, although the NASCAR Dads are convinced it’s because “the people” will it all forward. Of course, Bubba Gene, Fox runs these races out of the kindness of their hearts and is only reluctantly collecting the billions of dollars in advertising revenue. But that’s the NASCAR Dad — corporations are good and decent and “bring jobs to folks like us” and are only corrupted when communists, socialists, and those who turn their backs on Jesus insist on regulations and standards.

And more than ever, NASCAR Dads believe in conspicuous consumption, although you won’t catch them puttin’ on airs or acting like latte-drinking Northeasterners. But consume they do, whether it be for endless rounds of cookouts, tailgate parties, or family reunions. And don’t think those massive campers are cheap, neither. And it costs a pretty penny to keep the late, great Dale Earnhardt’s spirit alive, from license plates, to bumper stickers, to mudflaps, to t-shirts. Turning a numbskull’s death — which was shocking to anyone who felt it was quite natural to drive at 200 MPH among dozens of other equally out of control vehicles — into a martyrdom surpassed only by J.C. himself is hard, thankless work. And if you are a Washington insider intent on higher office, you’d better be damn sure to quote Lord Dale on occasion, lest you be branded as out of touch or (gasp!) “snobbish.” Remember Ann Coulter crucifying the New York Times for ignoring Dale’s death at Daytona? Only the Times didn’t ignore it and in fact, featured it on the front page? Still, despite the typical Coulter bullshit and distortion, it is telling that she believes it is vital that legislators and media elites otherwise occupied with WMDs, war, terrorism, poverty, unemployment, and Wall Street scandals pay attention to the neck-snapping of some Dixie-loving stock car driver. But she’s right. We no longer live in a time when policy wonks and talking heads can look down with shame at our brothers to the South, dismissing their “culture” as pathetic, half-mad stabs at legitimacy, when their daily lives are little more than the consumption of unhealthy food, ignorance, sexism, gun-toting, and fighting over scientific issues that were settled by civilized people decades (or centuries) ago. We must tread lightly my friends, for it appears that these people have finally figured out that Election Day is about much more than keeping the darkies from the polls.

So yes, it is quite possible that NASCAR Dads will turn the tide in the next election, although I’m not sure why there is any suspense as to who these fools will vote for. Does anyone think that Earl from Birmingham is going to cast a ballot for John Kerry? Or anyone who has spent more than five minutes away from Dixie? The South is lost forever to the Republican Party and the only remaining issue is how many NASCAR Dads are going to make that 12-hour window to actually vote come November. But the prospect of some faggy, ballet-loving liberal from Taxachusetts might be reason enough to sober up and get out of bed. But these Sons of the Soil” now feel it is their turn to be flattered, and they’ll keep us all in a state of phony suspense for just a bit longer. But Bush most likely knows, and Kerry sure as hell does. Like the self-absorbed, contemptible Soccer Moms of years past, NASCAR Dads just want to know what you can do for them, which is easy so long as teeny tax breaks for bait remain on the table.