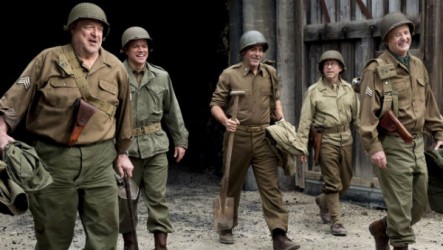 General Patton, I need to assemble a special task force of the quirkiest losers serving in the Allied Forces, right now!

Fair Value of The Monuments Men: $9.00. I found it to be an interesting, quaintly anachronistic film about an interesting bit of history, but others without a fondness for the sub-genre may find it to be aimless and meandering.

In my mind, I am aware that the Holocaust was the greatest crime of the Nazis, but in my heart, it has always been the bonfires and book burnings that triggered the greatest abhorrence in me. Hitler was the greatest philistine of history, destroying all which did not match his volkitsch romanticism. The Nero decree was one of the most spiteful actions ever recorded- all art and treasure acquired was to be destroyed, rather than allowed into Allied control. It is against this timeline of destruction that the Monuments Men race in George Clooney’s old timey war film, based on the book by Robert Edsel.

The MFAA, or Monuments, Fine Arts, and Archives program, was one of the most unique military units ever to take the field. They were a cross-section of art historians, architects, and restorers tasked with preserving historical monuments and rescuing stolen artworks across Western Europe during World War II. To tell this unique tale, Mr. Clooney rolls out one of the oldest film formulas- the rag tag band of ethnically diverse misfits. You have the redemption seeking brit (Hugh Bonneville), the shrimpy little guy spoiling for a fight (Bob Balaban, who often steals the scene), and so forth. Bill Murray plays an aged architect, and John Goodman is a sculptor.

The Deadliest Days of War Are the Last Ones: The Monuments men are no idle group of rear echelon academics; instead they are in a constant running skirmish to try to keep ahead of retreating German looters fighting a scorched earth war. This means, frequently, that Clooney’s culture commandoes are ahead of the Allied armies- they are the first men into Bruges, and wrong turns lead them into ambushes meant for frontline troops.

Also, it is the dying days of the war, which means chaos. The lines are no longer fixed; hardliner SS are fighting guerrilla actions; and the tactics of the Germans are so devious that it can be difficult to know when you’re getting an honest surrender.

Meanwhile, the major sub-plot involves Matt Damon as Lt. Granger. He is back in Paris, trying to convince docent Claire Simone (Cate Blanchett) to aid him. She was the only one taking notes on the Nazi looting during the occupation of Paris, but she remains as paranoid as one might expect of a mole of the French Resistance. 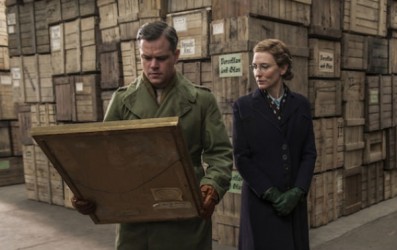 “This Picasso guy is ok, Cate Blanchett, but he’s not as good as Thomas Kinkaid”

Is Art Worth Dying For? Usually, when we are exposed to this question, it comes in the form of films like The Black Swan, or Pollock. The question is phrased as: is making great art a thing worth dying for? Clooney’s film goes further: is it worthwhile to risk the lives of young men for the sake of preserving great works of art? I would agree with the film-maker’s message. The bodies of our corpses may inform the future that we lived; but it is our art and our creations that will tell the future of how we lived. Artifice and creation is an act of defiance against the nihilistic inevitability of the greater cosmos; while the universe is ultimately meaningless, we derive self-meaning from the assertion of our aesthetics over the random world.

The Dramatic Perils of Historical Accuracy: Clooney’s film suffers from three big problems. The first is that a historically accurate tales is not, necessarily, a dramatically paced tale. The tension is never communicated well; instead we get the usual tour, starting with the training camp and stopping by major events like Normandy and The Battle of the Bulge.

The other problem is generalism. The movie wants to be a war comedy, a Spielbergian ‘Greatest Generation’ movie, a French Resistance intrigue/romance film, an old time war movie. The consequence of these shifting moods is that the film never settles into an discernible rhythym. While this unpredictability does provide some suspense (danger turns into farce and vice versa with great suddenness), the lack of focus makes for an inadequate build-up of any character dynamics that would support real pathos. Clooney could have achieved better results with a smaller cast and fewer sub-plots.

In some ways, Clooney is undermined by the same things that made his earlier films work. His earlier films were also exercises in nostalgic exploration- Good Night and Good Luck and Confessions of a Dangerous Mind benefitted from being off-beat, while Leatherheads, like this film, sinks by being a film framed in existing dramatic conventions. The extensive use of monologues in Good Night and Good Luck and The Ides of March helped to really establish the philosophies and conflicts of those films. If Clooney had merely bothered to imitate Tarantino’s approach to small talk in Inglourious Basterds, and had his characters really go into discussing aesthetics and sacrifice, he might have had something. But it’s too one-sided. There’s no real argument to the moral questions, there’s not enough time spent on building any one character relationship, and there’s not rhythm to the combat to actually build towards a climax. Like the famous Amber room, Clooney’s The Monuments Men is ultimately lost amidst the chaos of the fall of the Third Reich. A pity.